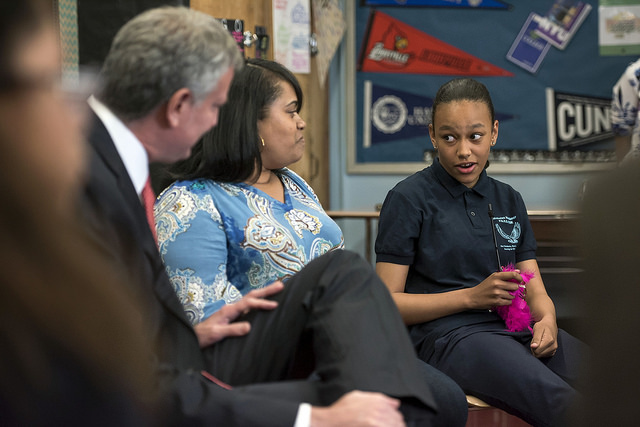 Our city is facing a tough question: how do we make schools safer?

New York City schools are on the precipice of returning to ineffective policies and practices like more policing and metal detectors that have harmed the students who are most in need. The city could and should instead take this opportunity to move further towards school culture and climate priorities that are designed to meet the social, emotional, and mental health needs of young people.

On Tuesday, New York City Council confronted the question of how to create safe schools in a hearing that included testimony from the NYPD, community groups, and, most importantly, young people.

It is young people who hold the answer to the question of how to make schools safer. Young people made clear that punitive and zero tolerance policies are ineffective to address conflict and often harm the students they are intended to support.

Solutions sought by young people address the root causes of conflict and fully recognize young people’s humanity. The Urban Youth Collaborative (whose organizational members include Make the Road New York, Future of Tomorrow, and Sistas and Brothas United) and the Center for Popular Democracy released a policy brief, “Young People’s Vision for Safe, Supportive, and Inclusive Schools,” which recommends dramatically increasing the number of counselors, providing comprehensive mental health supports, and infusing all schools with restorative practices. Absent from this list are metal detectors and police.

Young people’s experiences navigating bullying, conflict, and responses that offer little in the way of resolutions, such as the state-violence perpetrated by arrests, have led them to reimagine school safety by prioritizing what they need most: mental health care; guidance counselors and social workers; and restorative practices. All of their solutions are also backed by research.

Studies show that lower student-to-guidance counselor ratios reduce disciplinary incidents in schools, including ones involving weapons, and students and teachers report feeling safer. There is currently one full-time guidance counselor for every 407 students across the city school system, while the recommended ratio in high-need schools is one for every 100. By contrast, there is currently one NYPD School Safety Division personnel for every 207 students. Our schools will be safer and bullying will be reduced if New York City drastically increases the number of guidance counselors in schools.

What is not on this list of programs to reduce bullying and make safer schools? Police and metal detectors. Policing in city schools creates extreme racial disparities -- just last week, the NYPD released shocking data illustrating this point.

For example, black girls are 14.4 times more likely to be arrested than their white peers, despite evidence that young people from different races do not misbehave at significantly different rates. Moreover, 97 percent of students middle-school age or younger who were arrested in school were black or Latinx, while they represent just 67 percent of the student population. Proponents of school policing and punitive disciplinary action often cite student safety as their primary justification. Yet there is no substantial evidentiary support for the proposition that police presence in schools create safe learning environments.

To the contrary, several studies show that young people are no safer after years of punitive practices and criminalization. Research shows that policing in schools does not reduce incidents of bullying or fighting. And young people feel significantly less safe. These practices also push young people out of schools entirely. Our schools can and must move away from policies and practices that are ineffective and dehumanize and criminalize young people.

Young people have the answer. We must listen to their calls for support.