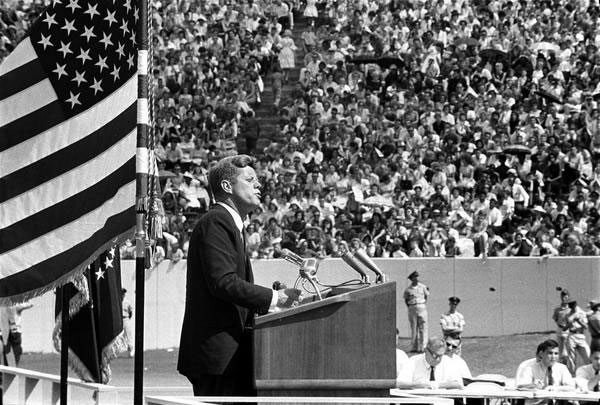 On June 11,1963, President John F. Kennedy made a televised speech to the nation on civil rights. It moved me -- I was 19 years old at the time -- more than any political event up to that moment.

"We are confronted primarily with a moral issue,” JFK said. “It is as old as the scriptures and is as clear as the American Constitution."

Later in the speech, he made the morality point again. "We face, therefore, a moral crisis as a country and as a people.”

“It cannot," he added, "be met by repressive police action."

Perhaps because of my religious education -- 12 years of Catholic schooling -- the president stressing the morality of the matter moved me deeply. No stronger case could be made for generally doing the right thing, or for, specifically, passing the legislation that Kennedy presented to address our moral problem.

For Kennedy "moral issue" was not a reference to the "family values" espoused -- up until recently, at least -- mainly by right-wingers upset with the flouting of conservative sexual and marital mores. He referred to fundamental religious and humanistic tenets that we as a society recognize: the common dignity of all people -- as in "all men are created equal" -- and that we have a great responsibility to provide for people’s well-being and to protect them from harm.

Recently, as I do my social and racial justice work -- which included a mayoral run earlier this year aimed to pushing these conversations to the fore -- I think more about Kennedy's remarks and his appeal to the American people, the case he made that we must reject the institutionalized racism in our country because it is immoral, contrary to our nation's founding principles. Not because it is wasteful, expensive, ineffective, but because it is fundamentally wrong either to inflict hardship on our fellow citizens or to ignore their plight caused by society's abuse or neglect.

Starkly racially-biased practices and realities are all too rife and ripe now in our city and country. They are similar to and different from the concerns that JFK and many other Americans in the ‘60s were concerned about and fought against.

For example, today in New York City, people of color are nine times more likely than whites to be arrested for marijuana possession, though research shows that white people use and sell the drug in equal or greater proportion to African-Americans or Latinos; black people make up about 25% of the city's population, but over 50% of felony arrests; more than 90% of the people incarcerated on Rikers Island are New Yorkers of color.

Racial discrimination in our city extends beyond our criminal justice system: 98% of homeless families are African-American or Latino; black and Latino children make up about 70% of our public school system's 1.1 million students, and research shows that the system's most dilapidated, poorly-performing schools almost entirely "serve" youth of color; meanwhile the 15% of the system's students who are white mainly attend the best-performing schools.

It came home to me while I ran for mayor and studied possible solutions to the city’s seemingly intractable problems that better remedies are available than are being applied or even discussed, but that out of fear of political risk or the expense involved, no mainstream politician comes forward to propose them. No government policy-maker issues dramatic, pointed challenges to our city's or the nation's citizens that we have a moral obligation, whatever the risks or costs, to rid our society of racist practices and realities.

For example, the city should change its response to mentally ill people in the community: send mental health professionals, rather than cops. Save lives rather than endanger them. The city must end "broken windows" policing tactics and focus policing on what we see cops do on TV shows: apprehending persons who do serious harm to the community. The city should commit to providing the 1.1 million children in our schools with small class sizes, which research and common-sense tell us improve academic outcomes for children across race and class lines. The city must commit to building affordable housing units poor people in the neighborhoods where the housing is provided can afford. Remove profit-making companies from the program and rely on community-based groups with track records in building & managing apartments.

Wrapping up, Kennedy said: "They [African-Americans] are not yet freed from the bonds of injustice. They are not freed from social and economic oppression...And this nation, for all its hopes and boasts, will not be fully free until all its citizens are free."

That should still be our goal, our moral imperative. Yet is there any current mainstream leader -- a political heading JFK falls under -- who will lead us there or even utter the words? It is unimaginable, for instance, that our president or New York mayor, despite his progressive claims, would play that role. It is then up to us, the activists and advocates for justice, all people who believe that moral values have a central place in our political life, to organize, to expose the terrible damaging effects that racism has on our fellow citizens and to press the case for the moral reckoning needed to create a fully inclusive society that is fair, safe, and equitable for all of us.