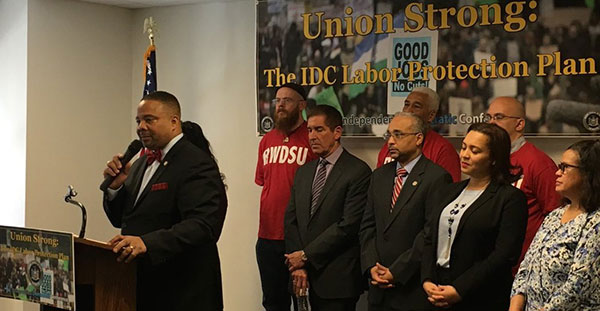 For years, dysfunction and real estate power brokers have prevented Albany from strengthening tenant protections in New York, and the result of these failures has been devastating for our neighborhoods: we continue to suffer from record homelessness and increasing displacement across the state.

The Independent Democratic Conference — a group of eight breakaway state senators elected as Democrats — has been a leading force of obstruction since 2011, partnering with Senate Republicans to shut out tenant voices in policy-making.

Recently, things began to look like they were changing in the Senate for the first time in years. The mainline Democrats and the IDC took up serious discussion about how to unify the conference. During the course of negotiations, the IDC claimed that its focus is “policies, not politics,” and outlined a series of key priorities for the conference.

We were extremely disappointed to learn that strengthening tenant protections was not one of them — especially since several members of the conference have both privately and publicly stated to us that this would be their top issue in 2018.

We are tenants and we are constituents of three IDC members: Senators Marisol Alcantara, Jose Peralta, and Jesse Hamilton. Joined together, these State Senators have the highest concentration of rent-regulated units in New York City.

We are fighting every day to be able to stay in our homes. Our neighborhoods are facing gentrification, and our landlords know loopholes in the rent laws mean they can raise our rents to market rate as soon as we leave. As a result, we face harassment, reduced services, and deplorable living conditions – all in an attempt to get us out of our homes. We have called on our state-level elected leaders to prioritize strengthening the rent laws through closing two major loopholes: the 20% eviction bonus and preferential rent. Our communities are experiencing increased rents, speculative landlords, and mass gentrification.

Over and over, Senators Alcantara, Hamilton, and Peralta told us that the IDC is the best vehicle to meet so-called progressive priorities. After serious pressure, they had committed to prioritizing these issues for the overwhelming number of tenants who live in their districts.

But once it came time to deliver, these senators and the IDC once again proved that they are the conference of the real estate industry. This is devastating for the tenants who are suffering in their districts daily because of laws that favor landlords.

In Peralta’s district, families at LeFrak City are sacrificing their savings, pulling their kids out of after-school programs, getting second jobs, and moving into smaller cramped apartments just to make ends meet. Many of us are seeing large rent hikes. At the end of every month, moving trucks haul the belongings of yet another family that has lost its apartment due to the preferential rent scam that Senator Peralta could fix next year.

In Brooklyn, just a few weeks ago, Senator Hamilton joined the Flatbush Tenants Coalition to tell the story of an 85-year-old grandmother recently evicted and now forced to live with friends on their couches, with her belongings in storage. Housing court in Brooklyn often has lines stretched around the block because the state ludicrously rewards landlords for evictions by allowing management to collect a 20% increase in rent — an eviction bonus.

The eviction bonus is the largest contributor to rent increases in rent-stabilized apartments. It doesn’t matter if the tenant moved out willingly or because the landlord refused to provide basic services to keep the apartment livable. The landlord can take that 20% increase, even if it raises the rent above market value.

Preferential rent is a bait-and-switch scam to get tenants out and collect the 20% eviction bonus. When a tenant first moves into an apartment, the landlord offers them a “discounted” rent. But when the lease is up, tenants can see increases of hundreds of dollars on their monthly rent.

This is simply a tactic used to get the eviction bonus and keep rents skyrocketing.

Preferential rents are causing tenants in Alcantara’s district to face potential increases of $1,000 or more when their lease expires, causing tenants to move and disrupting communities.

To be very clear, this can be changed through legislation in Albany.

Senators Alcantara, Hamilton, and Peralta could help change this next year. They have spent the past years and months promising tenants in their districts that this is a top priority. Alcantara and Peralta went as far as publishing their promises in an op-ed. But we have since seen that like so many things with IDC senators, these promises ring hollow, as the IDC did not list rent regulations as a priority area in its negotiations to realign with mainline Democrats.

There are only a few months left for the members of the IDC to deliver for tenants. If they fail to do so, we will remember in September.