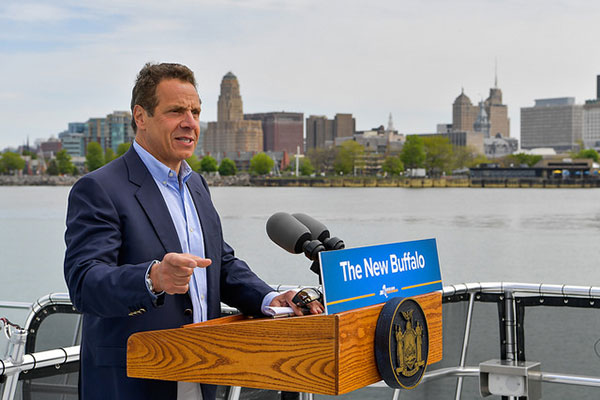 Gov. Cuomo in Buffalo (photo via The Governor's Office)

While spending billions, Governor Cuomo and Empire State Development have not acted on common-sense transparency measures that provide basic information taxpayers deserve to know: the types of benefits companies are receiving; the cost to taxpayers; and the number and cost of jobs created or retained.

Their inaction comes as the governor’s former senior advisor Joe Percoco was convicted on three federal corruption counts, including solicitation of bribes, in the first of two trials involving the alleged rigging of contracts tied to upstate mega-development projects worth hundreds of millions of dollars in business subsidies.

New Yorkers deserve to know more about economic development money being spent, including where it is going and what the money is actually producing.

Democratic Assemblymember Robin Schimminger and Republic Senator Tom Croci have introduced legislation (A.8175/S.6613-B), which would create a “Database of Deals” listing all projects awarded to a particular company, detailing subsidies received, and what New Yorkers are receiving for their return on investment in the taxpayer cost per job. The bill passed out of committees in both houses last year but never made it to the floor for a vote.

The Assembly and Senate each included a similar proposal in one-house budget resolutions passed on Wednesday. Meanwhile, the New York City Council passed legislation in December codifying its own “Database of Deals” established by the city’s Economic Development Corporation (EDC.) EDC had already made economic development in New York City more transparent by publishing a map showing major projects and their essential data across the five boroughs.

A state “Database of Deals” is fundamental transparency modeled on existing disclosure in numerous states of different political stripes including Florida, Maryland and Indiana. This reflects the near-unanimity on the need for greater transparency and accountability of business subsidies.

While states fervently compete to give taxpayer subsidies to the world’s wealthiest corporation, Amazon, for its second headquarters, the way in which public money is awarded is being challenged from the left and the right. Nationally, the progressive labor-backed Good Jobs First has long advocated for economic development accountability while the conservative Koch Foundation is seeking proposals to “identify and develop measures to provide transparency and accountability to corporate welfare.” In New York, groups as ideologically varied as the Working Families Party, Citizens Budget Commission, and Empire Center have questioned the state’s economic development practices.

But Governor Cuomo need look no further than his own 2013 Tax Reform and Fairness Commission to understand the need for transparency and accountability of business subsidies.  In a report written for the commission entitled New York State Business Tax Credits: Analysis and Evaluation, the authors concluded, “There is, however, no conclusive evidence from research studies conducted since the mid-1950s to show that business tax incentives have an impact on net economic gains to the states above and beyond the level that would have been attained absent the incentives. In addition, business tax incentives violate principles of good tax policy and tenets of good budgeting.”

Despite the questioning of their efficacy, Governor Cuomo’s Executive Budget proposes over $2 billion in new spending and tax credits on business subsidies. Last year, the Assembly and Senate wrote the governor a blank check, increasing economic development spending without passing any legislation that would make the spending more transparent or measure the effectiveness of whether, and which, business subsidies work best.

This year, Reinvent Albany and fiscal and transparency watchdog groups are urging the governor and Legislature to act on four measures to make taxpayer spending on business subsidies more transparent and accountable, including the “Database of Deals.”

They should act swiftly to restore the public trust, which has been battered by federal indictments and sordid accounts of insider dealing at trial.