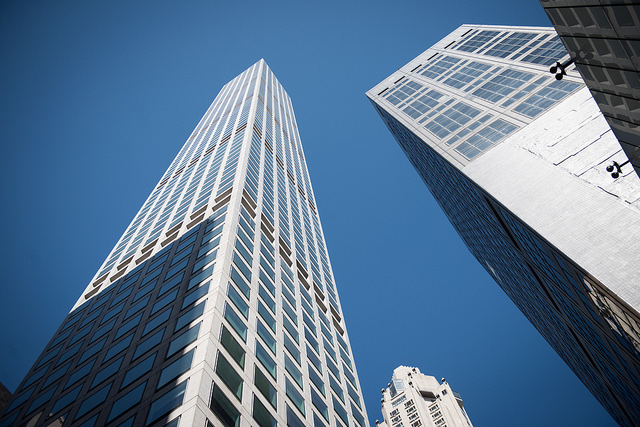 Nearly every day it seems, a new record is broken for a tallest new residential structure in our city. Whether it is Downtown Brooklyn’s first 1,000+ foot tall tower, Queens’ tallest tower in Long Island City, or the 1,550 foot tall West 57 Street residential tower that will soon rise higher than the top floor of One World Trade Center, residential building in New York City is reaching new heights.

But for Mayor de Blasio and the real estate industry, even these record-breaking heights are not enough. They are advocating for repealing a 60-year-old state law, which, while capping the size of residential developments in New York City, is still so generous as to allow the unprecedented giants going up now.

If the mayor and the real estate industry have their way, the sky could literally be the limit for residential high-rises in New York City. And not just in Midtown or the Financial District, but residential neighborhoods like the Upper East Side and Upper West Side, Greenwich Village, and various parts of Brooklyn and Queens, where current rules limit new residential development to at or near the cap imposed by state law.

The possibility is more than theoretical. Two years ago proponents of lifting the cap came close to getting the State Legislature to do so. This year the State Senate pushed for the measure to be included in the state budget, but the Assembly ultimately did not go along with it (though the cap removal definitely has its proponents in the Assembly majority). Most observers expect the supporters of lifting the cap to push the measure again before the state legislative session ends in June, possibly as part of the “big ugly” – the annual package of often unrelated and controversial measures passed in the final hours of legislative session, with little public notice or input.

With all the problems facing New York City right now, from dysfunctional subways to crumbling public housing to crippling congestion, why is this an issue the mayor has chosen to take on?

This is a false dichotomy that the real estate industry has promulgated and the mayor has endorsed – that the best and, in many cases, only way to get new affordable housing out of for-profit developers across the city is by supersizing the amount of luxury, market-rate housing they can build, and then attaching these smaller amounts of affordable housing to it.

It’s due to this approach that communities throughout New York City have opposed the mayor’s rezoning plans – both because they would destroy the scale and character of their neighborhoods, and because under the guise of introducing “affordable housing” (which in many cases is unaffordable to the residents of the neighborhood), vastly increased quantities of very expensive housing is built, which more than counteracts any good done by the relatively small amount of affordable housing created.

Take Greenwich Village and the East Village. These increasingly wealthy neighborhoods with decreasing affordable housing have been begging the mayor to support a zoning plan we have proposed that would allow modest increases in the allowable size of developments as a condition for creating or preserving affordable housing. The mayor has adamantly opposed the plan, saying he would only be willing to consider the kind of massive increases in the allowable size of residential development that would bump up against the current state cap, to say nothing of destroying the character of these human-scaled neighborhoods.

Don’t let the mayor or Big Real Estate fool you. The state cap on the size of New York City residential buildings is not limiting anything New Yorkers should be worried about. The only thing it’s limiting is the already astronomical profits of developers, and the ambitions of some politicians to increase them even further.