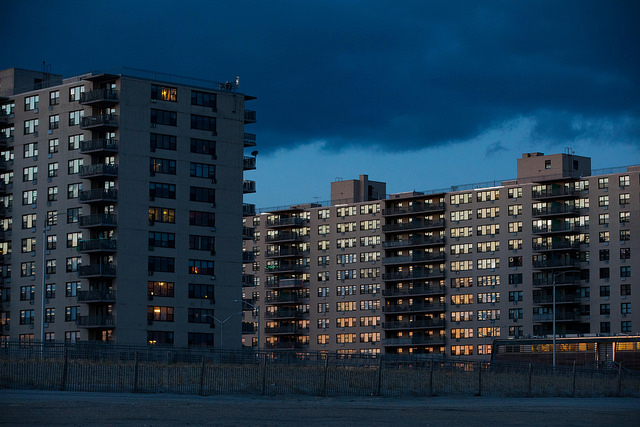 New York’s severe housing crisis can be traced to a simple fact—our city doesn’t have enough homes for the people who want to live here. The shortage has led to ever-increasing rents, the steady displacement of long-standing communities, and levels of homelessness not seen since the Great Depression. To put it bluntly, we need to build more homes. Lots of them. Affordable and market rate. Yesterday.

One senseless obstacle to new housing is a statewide cap on the density of new residential construction. Since 1961, New York has prohibited the construction of any residential building that has floor space greater than 12 times the size of its lot. This limit is ill-suited for New York City, which needs to allow larger residential buildings to house its growing population in neighborhoods with good transit and good schools. The Regional Plan Association, a respected and nonpartisan think tank, has called for the repeal of this cap, arguing that without more dense construction, displacement in gentrifying neighborhoods will accelerate and the City will choke on worsened congestion.

It is encouraging that Mayor de Blasio and the state Senate have signaled support for ending these restrictions. Unfortunately, Andrew Berman, Executive Director of The Greenwich Village Society for Historic Preservation (GVSHP), recently published an op-ed with Gotham Gazette that includes several misleading arguments in favor of the density cap. Berman argues that fighting against new housing will somehow result in a more affordable city. He is mistaken; while new highrises will not single-handedly fix New York’s affordability problem, they deserve to be recognized as a serious tool for addressing the housing crisis.

In a shortage, the rich, whether they be landlords, wealthy tenants, or homeowners, always win. In a housing glut, tenants win. Denser buildings would produce more housing units, a substantial portion of which would be permanently affordable through the Mandatory Inclusionary Housing law. Before leaving office in 2016, the Obama Administration published an analysis of the barriers to new construction of affordable housing, and the most destructive factor they identified were burdensome restrictions on the size and shape of new buildings, like those Mr. Berman endorses.

Many readers may be skeptical of the idea that new market-rate homes help keep rents low, but studies have shown that denser, market-rate apartments in in-demand neighborhoods relieve pressure on existing homes citywide. Recent construction has lowered median rents across Brooklyn, Manhattan, and Queens, not just the top of the market. And south of 96 Street, the most affordable neighborhoods also happen to be the densest—the Upper East Side and the Lower East Side—and not, tellingly, neighborhoods hemmed in by ‘historic’ zoning, like Mr. Berman’s Greenwich Village.

If we don't produce enough new market-rate units, the people who might move into a new condo building in Downtown Brooklyn might instead buy a converted brownstone In Crown Heights, displacing existing Crown Heights residents in the process. People who might want to live on the Upper West Side are priced out and move into West Harlem instead. Forbidding dense development in one neighborhood is a recipe for gentrification in the next one over. Members of my organization, Open New York, have experienced this first-hand. Some of us, priced out of neighborhoods like Kips Bay, have become reluctant gentrifiers of Bushwick or Bed-Stuy. Others, like myself in the East Village, worry about our rents rising and facing the same fate.

Although unscrupulous landlords or rapacious speculators hardly help matters, the unfortunate truth is that the city’s housing crisis and the displacement it has wrought are primarily caused by these kinds of restrictions. Wealthy and politically-connected residents in desirable neighborhoods consistently use these laws to thwart the construction of new housing under the guise of ‘preserving neighborhood character,’ keeping their communities exclusive and pushing both new residents and their communities’ most vulnerable residents into less well-off areas. The result is gentrification and skyrocketing rents. New York needs to consider another way.

Lifting the state density cap would not affect residents’ right to have a say in new development. Any changes to a neighborhood’s zoning would still have to go through the regular land-use process and be approved by the City Council, and the city’s Mandatory Inclusionary Housing law would still apply, ensuring any changes include a mix of affordable and market rate units. But eliminating the ban would give residents more flexibility to decide how to grow, whereas keeping it forces us to double down on the same failed policies of exclusion. Rather than looking to Greenwich Village—one of the most expensive neighborhoods in the city—as a model to emulate, we should be working to eliminate the barriers to affordable growth. Removing this counterproductive restriction on density is a good first step.

***
William Thomas is an East Village resident and a member of Open New York, an independent pro-housing advocacy group. On Twitter, @OpenNYForAll.