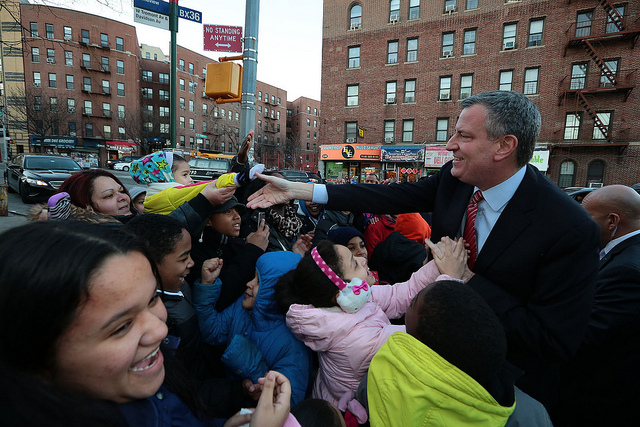 In the Fall of 2014, New York City took an important step forward with the rollout of universal after-school for all public middle school students. SONYC, or School’s Out NYC, provides 6th, 7th and 8th graders with a foundation for success by offering opportunities, beyond the traditional learning settings of a classroom, that allow them to explore their interests and abilities in sports and arts and youth leadership and more.

Mayor de Blasio said in his announcement at the time that “Middle school is often a make-or-break time in an adolescent's life—and we're determined to use all tools at our disposal to expand learning opportunities for the future shapers of our city."

In the first year of implementation, the SONYC after-school program offered a summer component, mirroring all after-school programs established during the Bloomberg administration. This was a positive step as research has proven summer camp programming is a critical component of child well-being and academic success. Among the tremendous benefits of summer programs, they help to close the achievement gap and aid with preventing “summer slide” learning losses. According to the National Summer Learning Association, summer learning loss accounts for two-thirds of the ninth-grade achievements gap in reading, and low-income youth lose two to three months of achievement each year.

However, since the summer of 2015, the de Blasio administration has annually threatened to cut more than $20 million for summer camp programming from the students enrolled in the after-school programs of the mayor’s creation. This money, or a portion of it, usually gets restored after negotiations with the City Council; however, this back-and-forth “budget dance” process leaves parents and programs scrambling at the last minute and anxiety-ridden until budget adoption. And as the budget is adopted in late June, these restorations naturally result in a smaller and smaller number of program slots, as ramping up a program, hiring staff, engaging parents, and enrolling students all takes time. The beginning of the summer is not the time to make these crucial funding decisions.

Once again, the de Blasio administration is planning to cut summer programs for over 34,000 middle-school students. Those most at risk of losing programming are the low-income working parents and families who are already facing many stressors in trying to make ends meet. Keeping their children safe during the summer months should not be one of them.

The proposed cut impacts children and families in every corner of the city but is particularly drastic in communities with the greatest needs. The community district of Brownsville is facing the biggest cut of nearly 1,600 slots despite having the highest child poverty rate in the city. Other hard-hit communities include East Harlem (1,281 slots), East New York (1,219 slots), the Rockaways (1,137 slots), East Tremont (1,097), Central Harlem (1,087 slots), and the Lower East Side (1,030 slots). Each slot represents a child who will not have an enriching and stable location to learn and grow this summer.

The budget dance for summer camp must come to an end! We must return to the original model that recognized that the families whose children engaged in after-school programming during the school year need summer camp opportunities that allow children to explore cultural and recreational interests and abilities and offer academic components that prevent summer learning loss.

We agree with Mayor de Blasio when he says New York City must become the fairest big city in America. Threatening to cut summer camp from 34,000 children, with a profound negative impact on the poorest communities of this city, is not fair! Playing the budget dance with funding for summer camp programs is not fair! Fairness demands that the de Blasio administration restore and baseline this funding - 34,000 children and their families are counting on it!

***
Jennifer March is executive director of Citizens’ Committee for Children of New York and a leader of the Campaign for Children. On Twitter @CCCNewYork.