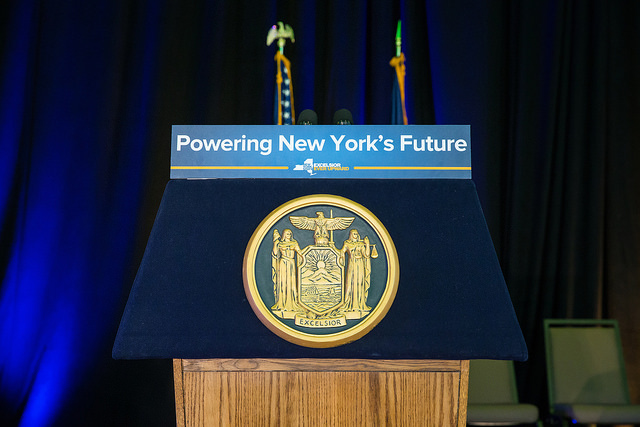 (Photo via the Governor's Office)

Across the country, nuclear plant owners are insisting states and the federal government approve billion-dollar subsidies to bail them out  -- even if they’re profitable. In its 2016 Clean Energy Standard (CES), the New York State Public Service Commission quietly authorized charging ratepayers up to $7.6 billion over 12 years on their electric bills to subsidize nuclear giant Exelon, so it would keep running upstate nuclear plants it threatened to close (FitzPatrick, Ginna, and Nine Mile Point). Since these surcharges kicked in last spring, New Yorkers have already handed over $656 million and counting to prop up these failing nuclear plants.

The nuclear subsidy scam started in New York, and it's getting exported. After they were imposed here, Exelon and other nuclear owners used the same playbook to obtain billions more in subsidies in Illinois ($2.4 billion), New Jersey ($3.6 billion), Connecticut (estimated up to $3 billion), and soon, Pennsylvania and other states. They did it by falsely claiming their nuclear plants are “clean energy” and “zero emissions,” and threatening to shutter them and terminate their workers if they don’t get the money, escalating their lobbying activity all the while.

To date, the fairness and legality of these subsidies have not been challenged and judged in court. But that’s about to change. A suit in New York State Supreme Court (Matter of Hudson River Sloop Clearwater v. NYS Public Service Commission, Albany County, 7242-16) is finally examining whether these subsidies are illegal or improper, if they violate the public trust and due process of law, and if PSC overstepped its authority by granting them without due process. The suit, of which I am a plaintiff, survived motions to dismiss, and hearings are pending which will have far-reaching implications.

New York is where the nuclear subsidy trend started. The PSC sold subsidies as a way to preserve jobs and “carbon-free” power as a kind of radioactive “bridge” to developing renewables. Now the New York State Supreme Court could be where those specious arguments unravel.

Dirty, obsolete nuclear plants are neither “clean energy” nor “zero emissions” and don’t deserve “zero emissions credits.” Subsidizing them squanders billions that won’t be invested in renewables or efficiency, the two best ways to lower greenhouse emissions and fight climate change. In its first year, New York’s Clean Energy Standard spent 99.5% of its money to subsidize nuclear plants, and just 0.5% on renewables.

Nuclear subsidies aren’t a public good, but a private wealth transfer, enriching wealthy nuclear owners at ratepayers’ expense. As Illinois subsidies kicked in this year, Exelon Generations’ earnings growth shot from 8% to a cork-popping 36%. In New Jersey, the Salem and Hope Creek nuclear plants obtained ratepayer subsidies, yet they’re profitable and will remain so at least through 2021. Nuclear owner PSEG’s CEO admitted to The Bergen Record the subsidy was calculated to guarantee an 18% profit -- almost double the average return for a regulated utility in New Jersey.

Could it be that behind such greedy profiteering is an enlightened desire on the part of nuclear owners to save us from climate change or preserve local jobs and tax bases? Is it unfair to accuse them of ratepayer money grabs?

Hardly. A March 2017 presentation by a former Exelon lobbyist that recently resurfaced brags about its nuclear subsidies representing a huge return on its “investment” in lobbying and political influence. One slide asked rhetorically, “Is Politics Profitable?,” and answers by comparing Exelon’s outlays in New York for the FitzPatrick plant, capital expenditures, and lobbying and PR campaigns to the $7.6 billion it got back in subsidies. It boasts that represented a “return on investment” of 750%. An image on the slide showed copious amounts of cash spiraling down a vortex.

That image is emblematic of what’s wrong with these subsidies: lobbying and politicking for profit, dumping billions in ratepayers’ money down the drain to enrich wealthy plant owners, instead of investing in renewables and efficiency. Those are the real issues, and as the New York State Supreme Court lawsuit goes to trial this year, they will finally get heard.

***
Tim Judson is the Executive Director of the Nuclear Information and Resource Service (NIRS), one of the plaintiffs in the New York lawsuit.