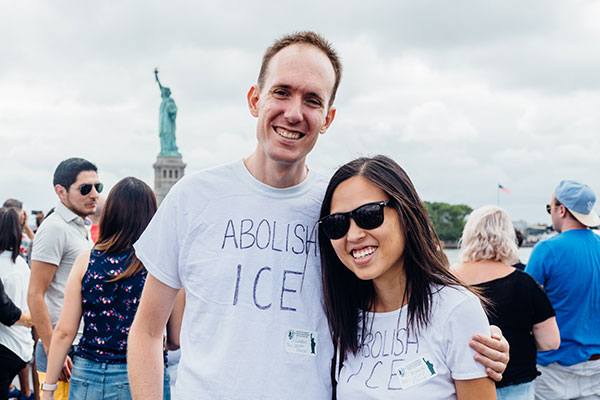 the author, Tiffany Huang, and her partner (photo: Sy Klipsch-Abudu of NYCLU)

Two months ago, my partner gifted me tickets for a Statue of Liberty tour. Despite growing up near New York and living in the city for the last two years, I had yet to visit the statue itself, and was excited to make the trip. For me and many others, the Statue of Liberty is a symbol of welcome to immigrants and refugees to the United States.

As our July tour date approached, however, the news roiled with ever-more-horrifying reports about family separation and child detention, brought about by the Trump administration’s “zero-tolerance” immigration policy. These horrors were fresh, but not altogether new. Although the United States has indeed served as a beacon of welcome and refuge for many immigrants over the centuries, it has not always lived up to that ideal. From the Chinese Exclusion Act of 1882, to the (anti-immigration) Immigration Act of 1924, to Operation Wetback in the 1950s, this country has at times enacted ugly, racist policies that excluded people from the U.S. on the basis of race and national origin.

We are in the midst of one of those periods. Under the Trump administration, Immigration and Customs Enforcement (ICE) has become an agent of toxic anti-immigrant action. Their “zero-tolerance” policy has led to human rights abuses that have horrified onlookers both in the U.S. and around the world. While the Trump administration has since ended the practice of family separation, more than 500 children remain separated from their families. ICE has deported 460 parents without their children. The trauma that these families have experienced will endure far past this moment.

When we were preparing to go on our Statue of Liberty tour, we felt compelled to raise attention to the contradiction between what the statue symbolizes and the reality of our present politics. We therefore chose to wear shirts that read “Abolish ICE.” For us, “Abolish ICE” is a call to acknowledge the abuses of current immigration policy, and to rebuild our broken immigration system.

When we arrived at the tour’s embarkation point, however, security personnel stopped us and demanded that we either change our shirts, or leave the tour. Although we insisted that we had no plans for disruptive action -- and indeed, we did not -- they held firm. We opted to leave the tour, but later contacted the New York Civil Liberties Union (NYCLU) about the incident. The National Park Service has since admitted that it was a mistake to bar us from the tour because of our shirts, which were simply and obviously an expression of free speech.

We are grateful that the U.S. Park Police has acknowledged its error. But to us, the bigger story is the injustice that the Trump administration continues to perpetrate on immigrant communities. As the Statue of Liberty stands in the New York Harbor, we as a nation must stand up for what she symbolizes.

***
Tiffany J. Huang is a graduate student at Columbia University. On Twitter @tiffjhuang.