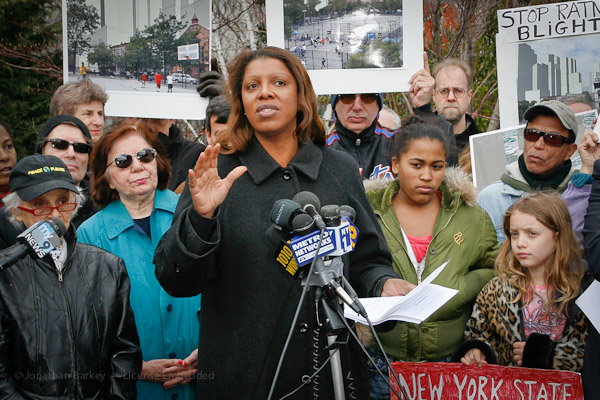 A May Politico profile of New York City Public Advocate Letitia (Tish) James, the front-runner in the upcoming election for state Attorney General, noted that “she has occasionally shown a flair for exaggeration, which has periodically raised questions about her credibility.” Cited were statements about her age and her claim of credit for a New York Times series on homelessness.

Indeed, I’ve witnessed such exaggeration. Perhaps it’s carelessness, coupled with confidence in her undeniable charisma. Perhaps it relates to James’ alternative career choice of the ministry (as she once told an interviewer), in which parable can trump precision. But as James moves up the professional ladder, such hyperbole gets more hazardous, especially as she asks voters to make her the state’s top legal officer.

So it was surprising and dismaying to hear James during two recent appearances inflate her significant and often brave record opposing the Atlantic Yards project, the arena-plus-towers development announced in 2003 when she was representing the 35th City Council District in Brooklyn.

As the project’s leading political opponent, she asked tough questions at City Council hearings, sponsored an alternative plan for the Vanderbilt Yard, and stood up for residents threatened by eminent domain or denied promised construction jobs. She doesn’t need to overstate her role challenging the political firmament. (Her campaign, informed of examples to be outlined in this column, declined to comment on the record.)

James’ new posture seems politically expedient, since, as I wrote in May 2016, James actually has taken a softer stand in recent years, willing to call a reporter after being nudged by the original project developer, the politically powerful Forest City Ratner. (The project was in 2014 renamed Pacific Park.)

Taking Atlantic Yards to the U.S. Supreme Court?
At the August 15 Democratic attorney general candidate forum sponsored by Indivisible Harlem (at about 55:20 remaining on this video) James responded to a question about the city’s investigation of yeshivas said to be offering an inadequate secular education and got on a riff that segued to Atlantic Yards.

“Lastly, let me just say that I’m the only individual on this stage that’s actually taken a major developer all the way to the United States Supreme Court, and almost bankrupted him, is Letitia James. We took a developer [who wanted] to build a basketball arena for the worst team in the NBA, and engaged in foreclosing upon homes. And I’ll always remember, as a City Council member who looked in the eyes of someone who was a Holocaust survivor”—

The moderator intervened, reminding James that the question concerned yeshivas.

Hold on. The federal eminent domain case, Goldstein v. Pataki, which James helped herald at an initial press conference, was rejected at the trial court and appellate court levels. Then the plaintiffs asked the Supreme Court to hear it; the Court refused, as it does most petitions. (A companion case was then filed in state court.)

So, while the case was brought to the Supreme Court, it wasn’t heard by the Supreme Court. More importantly, Council Member James as an individual played, at best, a supporting role. She was neither named plaintiff nor participating lawyer.

Also, neither Forest City Ratner nor Empire State Development, the state authority overseeing and shepherding the project, were "foreclosing on homes," or taking homes from borrowers in default. James would better have said that, with the threat of eminent domain, the developer was squeezing—and buying, with significant public dollars—people out of their homes.

A Holocaust story
What about that Holocaust survivor? James at least once has dubiously expanded that reference, as I wrote in September 2012, as the Barclays Center was opening, about a TV interview with James.

"The issue is really about standing up and advocating for your community...against the abuse of all is right,” she said. “This woman I know, and I'll always remember her, lived in footprint, she was a Holocaust survivor. She wanted to die in her home. She was 89 years old. She should've been allowed to die in her home and not suffer under the stress of being subject to eminent domain for a basketball arena."

Yes, an elderly woman in the footprint, Victoria Harmon, didn't want to move, and did end up dying at home, but she wasn’t a Holocaust survivor.

“I took that [eminent domain] case all the way to the Supreme Court," she said at one point, soon amending the claim to “We."

As I wrote on Twitter, James deserves credit for promoting or participating in several Atlantic Yards cases, such as the environmental review case (in the photo at top), but not the claim as stated.

She was a named plaintiff in two lawsuits: one challenging the Metropolitan Transportation Authority’s willingness to relax a deal with developer Forest City Ratner, and another challenging the state’s 2009 re-approval of the project, which ultimately led a judge to criticize Empire State Development, the state authority overseeing the project, and to order a new environmental review.

Was my criticism, as one James supporter tweeted, “strangely nitpicky”? I don’t think so, especially if it’s part of a pattern.

“So, we should not block the clock,” said James, referring to the widespread belief that the towers—one stretching 986 feet tall—would block views of the four-sided clock of the Williamsburgh Savings Bank tower, now known as One Hanson. (Neighborhood opponents say the clock will be blocked from the west; the environmental review says it won’t.)

Really? The landmarked tower rises 512 feet. You can’t see near it from the biggest clearing (the Longmeadow) inside Prospect Park; that intersection is just too far away. The places where one might be lost, even in decades past, would further scotch sightlines. (By the way, if you walk up Flatbush Avenue a few blocks today and look northwest toward the bank, the clock is already blocked by a tower flanking the Barclays Center, 461 Dean.)

James had ample reasons to be wary of 80 Flatbush, notably what Assemblymember Jo Anne Simon and state Senator Velmanette Montgomery have called the request for an “unprecedented” tripling of allowable density. But James went beyond criticism to fable.