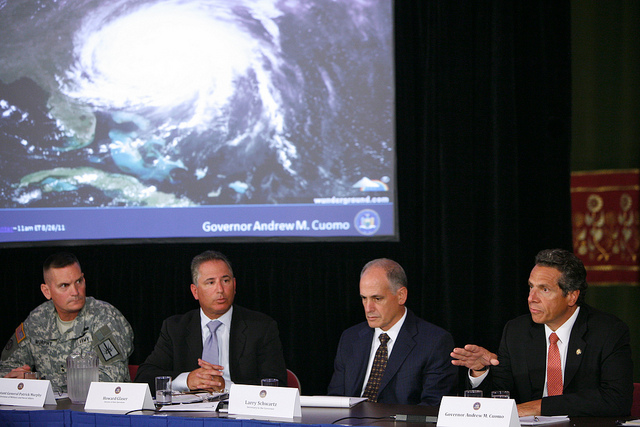 Findley Lake, in Chautauqua County, on the western edge of the state, is about as far as you can drive from the Bronx and still be in New York State. It’s as close to Cleveland, Ohio as eastern Suffolk County is to the Grand Concourse. Chautauqua is a big county, land-wise, 1,100 square miles -- about 25 times larger than the Bronx. People in Chautauqua are spread out among rolling farmlands and lakes, about 132 residents in a square mile. The Bronx crams 34,000 souls into the same mile. Chautauqua is also about as white as you can get, 94 percent, while the Bronx is New York’s most-black county, with 430 out of every 1,000 residents.

You could argue that there are not two places in the state more separated by geography, racial makeup, culture, and politics. Yet, in last week’s Democratic primary, one thing joined, however briefly, midwestern Chautauqua and urban Bronx: they both delivered overwhelming electoral victory to Andrew Cuomo.

The Bronx went for Cuomo by over 80 percent, his highest margin in the state. Chautauqua delivered 64 percent for Cuomo, not quite the stratospheric number of the Bronx but an even higher percentage than Cuomo’s otherwise crushing margins in Brooklyn and Manhattan.

You could conjure up pretty much any other divide from this diverse state and the result would be the same. Nassau, the state’s richest county (median or family income), just about matched the poorest county (Bronx again) with 77 percent for Cuomo. Union households and non-union households were on the same track, according to Siena’s polling. And voters under 34 were actually more likely to vote Cuomo than voters aged 35-54, confounding conventional wisdom about where newly energized young voters would go (Cuomo won decisively across all age groups).

It’s no secret that Cuomo was backed by New York’s real estate community. But he was equally backed by tenants -- 80 percent of Bronx households are renters. He won those fed up with high taxes in Suffolk in almost equal numbers with tax and spend Upper West Side liberals. He won minimum wage workers in New York City and dominated among small business owners in the North Country, where small businesses represent over 90 percent of total businesses.

All of this in as high turnout a primary election as New York has ever seen.

So what to make of this absolutely dominant showing by Cuomo?

Much of the post-primary press narrative went like this: "Cynthia Nixon lost but progressives won because she moved Cuomo to the left. Cuomo’s margin was due to Nixon being a flawed candidate and Cuomo’s significant outspending over Nixon.”

Those are nice and simple memes, but they don't explain the results in any way. The near run of the table by Cuomo suggests this: New Yorkers weren’t buying what Nixon was selling.

If anything, New York as a whole demonstrated that New Yorkers like their progressivism, but they like it tempered with fiscal reality, with experience, and the desire and ability to find common ground between Findley Lake and Pelham Bay. That’s not what Nixon was selling -- but its Cuomo’s whole brand.

Nixon’s poor showing can’t be explained by being outspent. Money counts most in elections when it’s used to define a lesser-known candidate or a barely-known opponent. The Cuomo-Nixon matchup was the polar opposite. Every primary voter knew exactly who Cuomo was and knew exactly who Nixon was. And Nixon’s campaign wasn’t exactly cash-strapped. Even in New York, $2 million is real money. Had she spent three times more and Cuomo spent a third of his final tally, the result wouldn’t have been significantly different. New York primary voters are as sophisticated as anywhere on the planet. To suggest that only 7 percent of African-Americans supported Nixon because they were duped by ads is insulting or worse. She got her message out and New Yorkers, across the board, rejected it.

Nor was she the ineffective campaigner that she’s widely been made out to be. Her performance in the debate was more than credible. She’s a gifted communicator who produced strong ads. And while her depth on specifics was clearly limited, she expressed a grasp of the issues that wasn’t significantly different from that of the average politician. Campaigns expose a candidate’s flaws, and this campaign was no different in showing both Nixon’s and Cuomo’s vulnerabilities. She made mistakes but nothing disqualifying, holding her own, especially for a novice campaigner. And New Yorkers still said ‘fuhgeddaboudit.’

But perhaps the biggest myth of the primary is the “Cynthia Effect,” the proposition that Nixon pushed Cuomo left. She won by losing, goes the logic, because the specter of Nixon rallying activist Democrats forced Cuomo to adopt more progressive positions than he otherwise would have. The problems with this bit of conventional wisdom are manifold.

First, the polling on Cuomo’s standing with the Democratic left has consistently shown this is his strongest base of support since he ran for governor in 2010. He didn’t need to move left to gain progressive support, progressives have been his for almost a decade. As Siena pollster Steve Greenberg told me in analyzing the post election results, “Liberals like him, they have always liked him, and they continue to like him.” So it’s not surprising Cuomo outperformed Nixon even among the most progressive wing of the party. Siena’s pre-primary poll gave Cuomo a commanding 65-24 lead among those Democrats who self-described as liberal. Cuomo polled identically with moderates, and only somewhat lower with conservative Democrats. In other words, a Cynthia Effect with no effect.

The argument that Cuomo’s support for progressive issues suddenly sprang out of nowhere only after Nixon announced her run is belied by the facts. Marriage equality in 2011, the gun restrictive SAFE Act in 2013, banning fracking in 2014, $15 minimum wage and paid family leave in 2016 — progressive touchstones brought home by Cuomo, all years before a Nixon candidacy was a gleam in the eye of the Working Families Party.

The outcome should also put to rest the internecine divide in the Democratic Party over the question of whether the path to victory for Democrats can rely alone on registering, rallying, and turning out progressives. The theory on the left has been that if the party focuses on turning progressives out in force, it can win without diluting purity of message by trying to win over moderates or, heaven forbid, conservatives. Thus, say some Democrats in the post-Clinton era, there’s really no need to reach out beyond the base, just turn out the base and sweet victory will ensue.

The Cuomo-Nixon primary is the highest profile race to blow that nonsense aside. Turnout in the primary was sky-high, shocking political pros from both ends of the party. Nixon, the “pure” progressive, scored a paltry share of that enhanced turnout. According to the Democratic left orthodoxy, those new voters we saw waxing enthusiastically in Brooklyn coffeehouses should have been enough to hand her a nomination. They weren’t, it wasn’t -- and it won’t ever be. Not in a state this diverse in political and cultural make-up. (And while typically a spike in turnout amid an influx of newly registered voters signals trouble for an incumbent, in this race it appeared to have only further bolstered Cuomo’s margins, another sign of Cuomo’s unusually broad coalition.)

By defining Nixon’s loss as purely a function of Cuomo’s political muscle or Nixon’s inexperience, members of the media, progressive leaders, and others take the wrong lesson from the results. No candidate from the Sanders/Warren/Nixon wing of the party has been able to equally appeal to black voters in Brooklyn, Latinos in the Bronx, moderates in the suburbs, blue collar whites in Buffalo, and farmers in Chautauqua. Without that ability, would-be progressive leaders are talking to themselves. They narrow their appeal while Cuomo, carrying a results-oriented progressive standard cabined by fiscal restraint, reached Democrats across the board.

It’s a big state where diversity of interests doesn’t end at the New York City border. The message for progressives out of this election is not to double down on talking to each other (hello, Twitter) but to talk to, listen to, and persuade the non-converted.

New Yorkers made a conscious choice to embrace Cuomo’s realpolitik progressivism and reject Nixon’s ‘progressivism only for progressives.’ Most importantly, you can’t win in New York, or for that matter in the nation, by utterly failing to win over black voters -- Nixon likely got less than one in ten African-American votes, a shameful showing. She likely picked up less than a third of women’s votes. These numbers should force some soul searching by progressive leaders. “Nixon won by losing” is a useful piece of self-delusion in the wake of utter repudiation. But it’s a complete misread of the lessons of Cuomo’s victory for a successful progressive coalition on a statewide -- or national -- basis.

***
Howard Glaser has served in executive positions in the public and private sectors for 35 years. He served as Director of State Operations in Governor Andrew Cuomo’s first term, and spent this past year teaching urban policy at Roosevelt House Public Policy Institute at Hunter College. On Twitter @hglaser1.