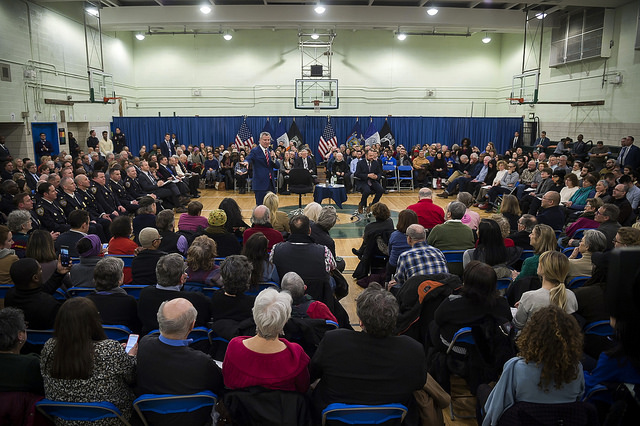 This May, Mayor Bill de Blasio and City Council Speaker Corey Johnson announced an advisory commission to recommend reforms to New York City’s property tax system. According to its website, the commission is charged with “developing proposals to make the system simpler, clearer, and fairer.” However, it has also been given the mandate to do so in a way that is revenue neutral -- a goal that is both counterproductive and unnecessary.

For eight years, I had the good fortune to serve as the Press Secretary for the New York City Department of Finance. Every year, between September and February, I would meet at least weekly with the team of senior assessors to try to understand how the market had changed over the past year, what new rules and laws had taken effect, what changes we were making internally, and how all of this would impact property owners. For every change made, some property owners benefitted and others did not.

“Revenue neutral” is a political term that implies that when the City makes a change to the system, it’s not being done to raise your property tax bill, even though it might. If it is unfair now, and the system is changed to be more equitable, virtually everyone will either have to pay more or pay less. When the impact is not neutral for anyone at the end of the day, saying it is just obscures the administration's stated intention that the City does not end up with less money to spend come budget season.

The commission will make its job a great deal easier if it does away with this artificial constraint. Without giving due consideration to the revenue side of reform, commissioners would be free to think about the issues that would result in real equity among property owners. They could explore the option of including owner-occupied co-ops and condos in Class 1 (along with 1-, 2-, and 3-family homes) and valuing them based on their sales price, where most experts have agreed they belong for the past 25 years, without worrying that the change would bankrupt the City. They could even consider more progressive ideas, like valuing investor-owned residential properties as the income producing properties they are.

For people who buy a home to live in, the value is in the sale price of their property. For people who buy a home to use as a rental or an Airbnb, the value is in income-producing capacity of the property. Because investors can capitalize on both, the revenue flows and the appreciation of a property’s market value, they are frequently willing to pay more than the average homebuyer. This, in turn, drives up market values in neighborhoods and makes it more difficult for current residents to buy a home.

Owning a home is the greatest wealth-building opportunity that residents in this country have, and we should make sure our system does not inadvertently inhibit the ability of New Yorkers to own their home just because they would use it differently from an investor.

Without the revenue neutral constraint, the Commission could also give real consideration to reforming the State-mandated tax caps that have created disparities between rich and poor neighborhoods, which are currently the basis for a lawsuit claiming the system is biased against low-income residents and people of color.

These are not the only ideas out there for making the system fair, and the Mayor and the City Council should be commended for creating a commission and for holding public hearings to gather New York City’s collective wisdom to consider for their final proposal. However, neither these, nor any other changes can be seriously considered through a revenue neutral lens.

That is not to say that the City cannot implement a revenue neutral change to the property tax, however.

Assessments are only one input into a property tax bill, and the City’s goal should be to make sure that those assessments are accurate and fair. The other major input into this equation is the tax rate, which can be raised or lowered by the Mayor and City Council as they see fit during the annual budget process. If the Mayor and City Council are serious about holding the line on property tax revenue, they already hold that power. No commission necessary.

***
Owen Stone is a government performance and innovation expert who served at the New York City Department of Finance from 2006 to 2014. On Twitter @owenstone.