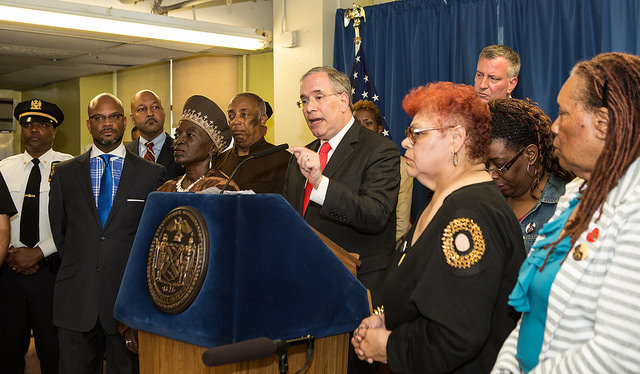 Comptroller Stringer, the author, at a press conference (photo: NYCHA)

What if I told you that moving your business to New York City could land you $3 billion in subsidies? Even better, what if getting those billions didn’t even require publicly disclosing key information required to qualify for the money in the first place?

If that sounds like a great deal to you, you’re in good company because Amazon is taking advantage of secrecy and subsidies baked into our outdated system of tax incentives. We all know the Amazon deal to place a “headquarters” in Long Island City was negotiated in the dark, circumventing a comprehensive public review process and leaving an entire community with more questions than answers. Meanwhile, as residents grapple with strained infrastructure and skyrocketing home prices, one of the largest and most profitable companies in the world will receive nothing short of a taxpayer-funded entitlement program.

The total package could approach nearly $3 billion when state and city benefits are included -- with an unprecedented $1.3 billion in city incentives alone. The Amazon deal has made it abundantly clear that many aspects of our current tax incentive programs – two in particular – need to be more closely scrutinized, changed or eliminated.

First, let’s take a look at the city’s Relocation and Employment Assistance Program, or REAP, which was originally designed to help attract employment outside of Manhattan’s business core. Amazon stands to receive some $900 million in tax credits for bringing its employees to Long Island City under REAP. To put this into perspective, REAP benefits totaled $32 million last year to 205 firms – but because there’s no cap on the program, Amazon alone stands to gain an unprecedented $75 million per year. In fact, REAP doesn’t just lower Amazon’s tax bill – because it’s a refundable tax credit, the city might actually have to cut a substantial refund check to Amazon.

Also, because REAP doesn’t require recipients to meet performance goals, Amazon can still receive benefits regardless of whether it eventually hires the 25,000 it promised, or just 25; or pays its employees an average of $150,000 as promised, or just $30,000.

Lost in the discussion is that our economy is already doing the work of REAP. Indeed, from 2007 to 2017, 83 percent of new jobs in New York City were outside of Manhattan, raising the question of whether the REAP program is needed in a city where businesses are already spreading across the five boroughs on their own.

Second, we need to pay close attention to the other benefit offered to Amazon, the Industrial and Commercial Abatement Program, or ICAP, which offers tax subsidies to companies that renovate or build on properties in boroughs outside of Manhattan to spur economic development. That may have sounded like a great idea when ICAP’s predecessor was originally launched in 1984, but today, at a time when Long Island City is booming, Amazon could benefit from nearly $400 million in property tax abatements for constructing its new “headquarters” in the neighborhood.

What’s worse, programs like REAP and ICAP are “as-of-right,” which means there’s no discretion in determining eligibility. If you check the boxes, you get the benefit – whether you’re a startup in need of help or Amazon, which is valued at $1 trillion.

The final insult in all of this is that there is little to no publicly available information on the particulars of these deals. In the absence of real detail, it’s impossible to do any serious evaluation of the effectiveness of these programs in the neighborhoods they are supposed to lift up. How can we determine if future incentives are a responsible investment if we do not know who received the benefit, how much they received, or if the subsidy even helped create new jobs? It’s a fiscal black hole.

We need legislation that answers these questions by requiring companies to waive their rights to privacy regarding the terms of deals in exchange for receiving benefits. It’s the right thing to do, and it’s not without precedent – the city’s Industrial Development Authority, which provides low-cost financing and other benefits, already requires this of its beneficiaries. And like those agreements, the details of REAP and ICAP deals should be reported annually.

Would Amazon have come to New York without the benefit of REAP and ICAP? Clearly, New York City was at the top of Amazon’s list, regardless of the subsidies. But we cannot allow Amazon to be the only winner amid such great need, whether it’s the residents of Queensbridge Houses, seniors struggling to stay in the neighborhood, or local kids yearning to gain the skills that Amazon professes to value.

It’s time we re-evaluate these programs and stop doling out billions of tax dollars without knowing what we’re getting in return. Instead we should focus our resources in ways that actually serve to improve the lives of the New Yorkers and not as a handout for wealthy corporations. Above all, New York City taxpayers deserve transparency and accountability for the use of their money, and it’s a price any employer – including Amazon – should be willing to pay to do business in New York.