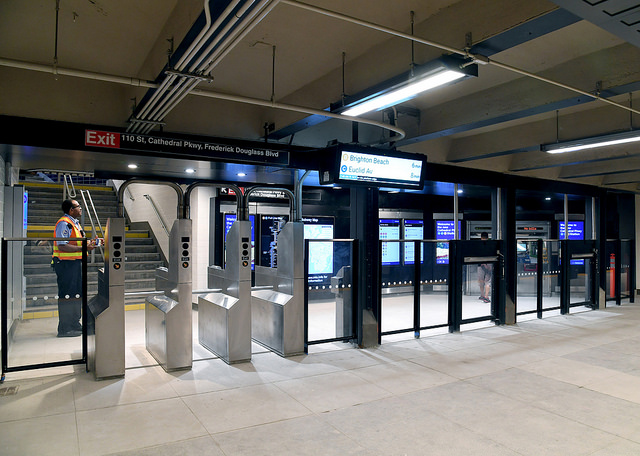 The MTA seems determined to blame New Yorkers for the mess it’s in.

The authority’s latest excuse is that poor people who jump turnstiles are responsible for the MTA’s financial woes. The MTA and the politicians and bureaucrats who control it should take responsibility for their own actions -- and inactions -- that have led to the city’s mass transit decline. Instead, the MTA seems to want to pit New Yorkers against each other.

The MTA and NYPD pledged last week to crack down on fare evaders. The MTA’s plan is to send agency executives and NYPD officers to subway stations and bus stops across the city. The executives will stand at subway turnstiles and on busses to create body blockades to bar anyone trying to get in without a Metrocard. More armed police officers at subway stations make an already harrowing commute for New Yorkers even more intolerable, and for many, will serve to add unnecessary fear into the way they start or end their day.

The billions of dollars at the MTA’s and the city’s disposal must be spent on fixing the actual causes of the crisis -- aging infrastructure -- not tangential issues like fare evasion, a distraction in the pursuit of solutions.

The MTA claims that fare evasion is robbing the agency of $215 million a year, though how it actually reached that number is lacking in clarity and validity. The transit authority appears determined to pin the blame for its precarious financial position on poor black and Latinx people who, history tells us, will suffer the most from any increase in fare evasion arrests.

And another population that both our mayor and governor have spoken passionately about protecting would stand to suffer greatly as a result of a new enforcement policy: immigrants. Immigrants who have even minor contact with the criminal justice system face far more drastic consequences. Under the Trump administration, an arrest for jumping a turnstile or even a criminal summons could result in deportation, family separation, and destroyed lives.

An analysis of New York Division of Criminal Justice Services data from the last four years by the Marshall Project shows that nearly 90 percent of people arrested for turnstile jumping were black or Hispanic. Given the NYPD’s history of targeting people of color for arrests and summonses for low-level offenses, let’s call the new proposal to crack down on fare evasion what it is: a plan that would funnel thousands more black and brown New Yorkers into the criminal justice system, and to scapegoat people of color for the decades of underfunding and mismanagement that are responsible for the MTA’s current problems.

Police resources must be spent on working with the community and identifying the types of behaviors that cause the most harm—not physically harmless fare evasion.

Years of grappling with the ripple effects of Broken Windows policing have shown us that arrests are not the way to deal with minor offenses, like riding your bike on the sidewalk, having an open container of alcohol, smoking marijuana, or jumping a turnstile. An uptick in enforcement would reverse the recent positive trend of fewer fare evasion arrests. Through October, police have made 5,236 arrests for fare evasion. That is still 5,236 arrests too many, but it represents a 66 percent drop compared to the same period last year.

DA Vance’s policy of not prosecuting turnstile jumpers represents real progress away from the dangerous and discredited Broken Windows theory of policing, which posits that if minor crimes are allowed to happen, then they will lead to more disorder and eventually to serious crime. In practice in New York, the theory is used as cover for discriminatory policing and harassment of communities of color, with no measurable impact on crime.

Poor black and brown people should not take the fall for the sins of politicians who have allowed the MTA to become a laughing stock. Arrests won’t solve the MTA’s problems, but they could devastate New Yorkers.

***
Donna Lieberman is Executive Director of the New York Civil Liberties Union and Marco Conner is Deputy Director of Transportation Alternatives. On Twitter @JustAskDonna with @NYCLU & @marco_conner with @TransAlt.