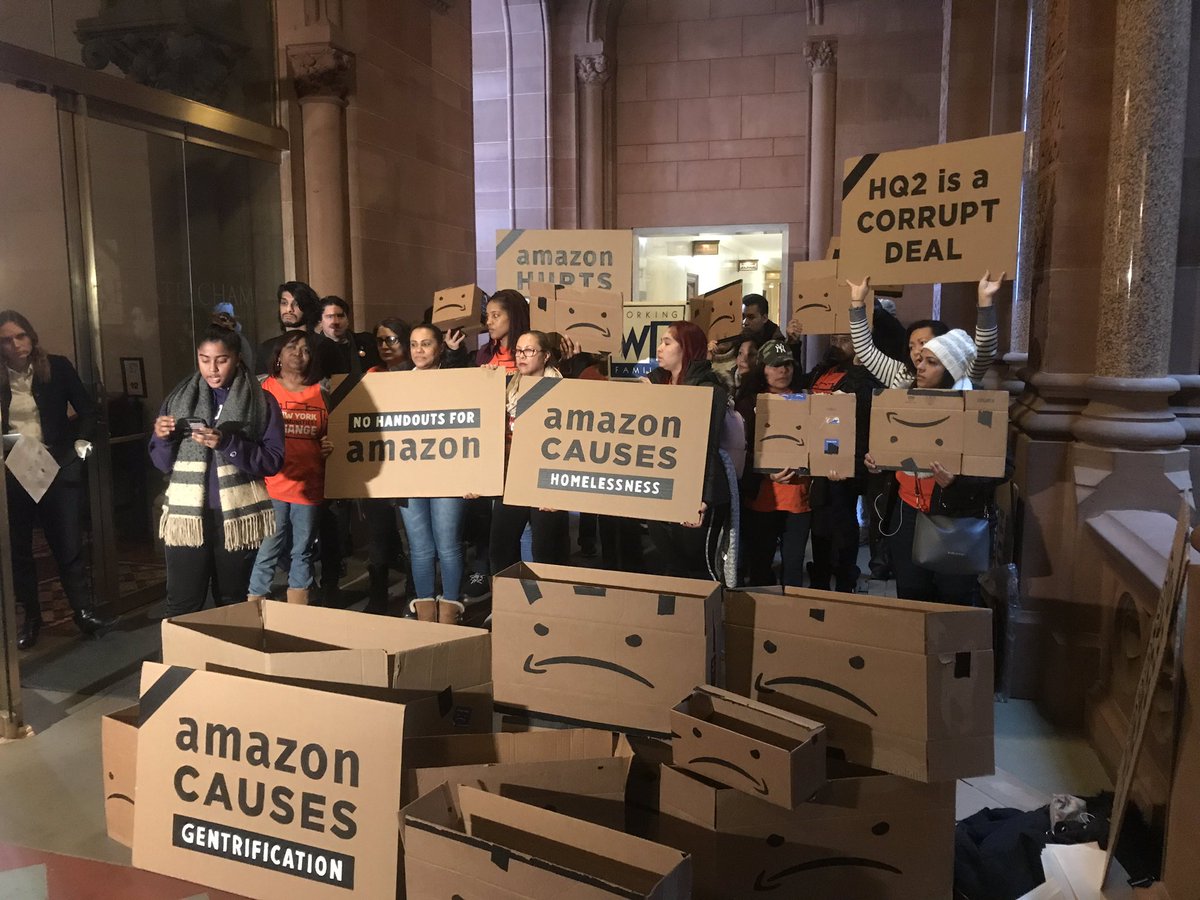 Amazon, Mayor de Blasio, and Governor Cuomo have recently gotten a first taste of how deep the backlash against the deal to bring the company to Queens is in New York City. They should be worried. First,Queens Neighborhoods United held an anti-Amazon rally in Astoria that drew hundreds of community members, another in a series of key actions against the deal. Then, members of the New York City Council peppered underprepared executives from Amazon while a raucous crowd booed and threw up signs. More actions are coming.

There is plenty of cynicism running through all three parties to the deal, so weathering some political grandstanding and protests was baked into the process. It’s why they went through a General Project Plan to bypass any public involvement or City Council review (which meant that the hearing was largely political theater — for the moment). No one seriously worried about the deal getting derailed.

But they are wrong and must know it by now. It seems clear that collectively they miscalculated on three factors:

One, Amazon’s terrible reputation as a neighbor and employer is more widely known than they expected.

Two, Americans, including New Yorkers, no longer buy that corporate giveaways are good for them

Three, New York City’s crumbling infrastructure has cost the mayor and the governor any credibility with New Yorkers.

These points are obvious to most people who don’t work for Amazon, the mayor, or the governor, but since no one outside of those three groups were involved in the deal, they were underestimated.

That’s easier to understand given the PR strategy, which became clear at the Council hearing. All three parties are banking on Amazon’s popularity with customers to see the deal through.

That’s potentially a sound, if deeply cynical, strategy. Amazon is really cheap and fast. Over 50% of Americans have an Amazon Prime account. Amazon is trusted more than Congress.

They have early evidence to support that in New York City. At the hearing, Amazon representatives and the city’s president of the Economic Development Corporation (EDC), James Patchett, cited a recent Quinnipiac poll saying that New Yorkers “overwhelmingly support” Amazon locating a second headquarters in Queens: 57% support it, while only 26% oppose it.

Look a bit closer and you’ll see that the result isn’t as strong as it seems. The primary question includes the statement “Amazon locating one of its new headquarters in Long Island City in Queens.” That’s innocuous language, but only 57% supported that?

It’s also a lot different than the reality of the deal. More accurate wording would be “Amazon, a $1 trillion company, getting $3 billion of public money as well as public and private land to build a new campus.”

Not surprisingly, when the poll referenced the “incentives” included, it tells a very different story: 46% of voters said they support the deal, while 44% was opposed.

While Quinnipiac has a sterling reputation and should, framing the $3 billion as “incentives” is doing a lot of heavy lifting. That may be technically accurate, but it is also accurate to call it “subsidies” or a “transfer of public funds” which would likely impact a respondent’s answer differently. Quinnipiac is using the language offered by the city and state, a choice that does involve accepting an ideological framing, which has consequences to the public discourse.

Since Amazon, the de Blasio administration, and the Cuomo administration are relying on the poll as vindication, it’s fair to say that they should be worried. Aside from the slightly generous wording of the poll, the simple fact is that most New Yorkers aren’t all that jazzed about HQ2, and the deal and company have barely seen the type of local scrutiny that is already starting.

Most New Yorkers can’t possibly be closely familiar with details of the deal. Even the City Council just found out about it — the MOU was only made public when the deal was announced.

The details around the $3 billion are worth examining (see a lot more about the incentives here and here), but the key points are troubling. All parties stress that the “incentives” are performance-based which is half-true, but how Amazon’s performance is measured is still intentionally vague. A lot of pubic money will be guaranteed, but Amazon has not made similarly detailed promises.

As more of this and other information about Amazon comes to light, I have a hard time believing that New Yorkers will support the deal. Community groups, the Democratic Socialists of America, elected officials, labor unions, and others are making sure more people hear about those details, through door-to-door canvassing, community meetings, and other efforts. Amazon will counter and spend a lot of money on consultants and hide behind the rushed-to-life community advisory board, but the deal stinks and people will see that for what it is.

The biggest question that Amazon, the mayor, and the governor have to answer is the most obvious: why does Amazon even need help to move to Long Island City?

The Amazon executives were shockingly flat-footed when they were asked this at the hearing. They claimed that talent was the main driver but that subsidies “mattered,” which more or less reveals the obvious: they were coming here anyway. They also tried to repeatedly say that the incentives are performance-based, but that does not answer why the company needs them. And, they had no good answer when directly asked if they would give the incentives for public use, but indicated the company would not.

Holding hundreds of cities over the barrel just to make sure that New York and Virginia (Crystal City) came up with incentives shows you how unethical Amazon is. Holding a gun to the city’s and state’s heads before moving in doesn’t make you a good neighbor. They aren’t and never will be, and that’s even before touching on their anti-union labor practices and what they do to local retail.

None of this is surprising to people who pay attention to Amazon’s history. They have bullied Seattle and small businesses and startups on their platform. They have exploited warehouse workers, third-party delivery services, and even white-collar employees. They have worked with ICE and the DOD. In the City Council hearing company representatives fell over themselves trying to say they aren’t a monopoly, but how else do you have the chutzpah to ask New York for $3 billion while insisting on a completely secretive process including non-disclosure agreements?

Maybe the mayor and the governor couldn’t “stop” Amazon from coming, but they could and should have done everything in their power to protect the many communities of New Yorkers who will be negatively impacted by Amazon (and already are). This deal doesn’t do that. Instead, they put aside their mutual disgust and saw “HQ2” as a legacy-defining victory.

But the political landscape in New York City and across the United States is changing. “Job creation” used to be enough for politicians to support a corporate giveaway, but people know those jobs aren’t good-paying or union-protected. “Spillover effect” used to be enough for technocrats to justify public wealth transfers, but people look around at crumbling subways, crowded schools, and overflowing sewers and wonder why there isn’t enough money to fix those directly.

Amazon, the mayor, and the governor are left hoping that people’s love of cheap goods delivered to their door quickly will save the “HQ2” deal. They think people are lazy and stupid, basically. The reality is, people are overworked and poor. Corporations like Amazon getting billions of what should be public money from politicians are a big reason why. Community groups and the DSA plan to keep knocking on doors throughout the city sharing that message.  Let’s see what the polls look like after that.