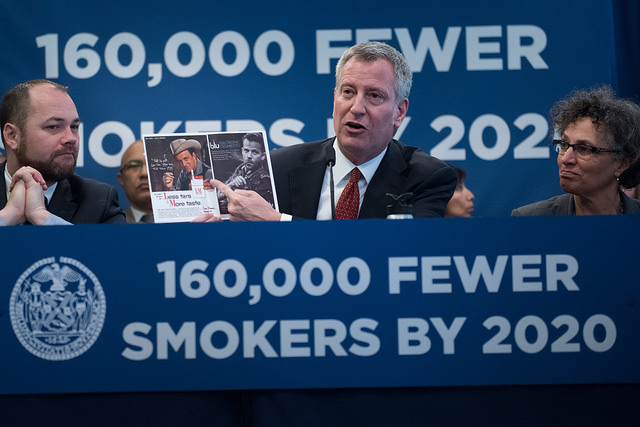 Shoppers at pharmacies are there to buy products that will make them healthier, whether that’s tissue boxes to help with colds or prescription medication for a chronic issue. Pharmacies shouldn’t be home to items that make people sick.

CVS recognized this in 2014 when it took the unprecedented step of stopping the sale of tobacco products in its stores. Many public health professionals thought this would be the beginning of a wave of pharmacies following CVS’ lead. That didn’t happen.

Until January 1 of this year New Yorkers could still buy tobacco products at 500 pharmacies throughout the city. That’s when a new law went into effect that banned New York City pharmacies from selling tobacco products. This rule was part of a package of legislation signed into law by Mayor de Blasio in August 2017 aimed at reducing the number of smokers in the city by 160,000 by 2020. More than 5 decades after the U.S. Surgeon General first warned against the dangers of smoking, more than 880,000 adults in New York City still smoke.

The ban on tobacco sales in pharmacies is another important step in the long fight against tobacco use in New York City. Despite many years of progress, that fight is far from over, and we’re now facing unprecedented challenges. Policymakers need to continue pushing for a healthier, smoke-free city by taking an even more restrictive approach to purchasing tobacco products and turning their attention more closely to the dangers of products that can act as a gateway to traditional cigarettes.

There are many ways to continue building on the anti-smoking momentum that has been accelerating since the passage of the Smoke Free Air Act in 2002.

Now that pharmacies no longer sell cigarettes, policymakers should turn their attention to where else New Yorkers are buying tobacco products. After it pulled tobacco products from its shelves, CVS found that 38 percent of people who exclusively bought cigarettes at their stores were more likely to stop buying them at all. Imagine the impact that can be made if access were further restricted at other stores that traditionally sell cigarettes, along with restricting access near places that young people frequent, including schools, houses of worship, playgrounds, and libraries. An aggressive campaign to reduce access – whether through halting sales altogether or continuing to increase prices – will pay dividends in public health and lower the number of smokers in New York City.

Looking beyond traditional cigarettes, one of the most pressing new challenges in public health is the rise of addictive e-cigarettes, which have exploded in popularity among youth. More than 20 percent of U.S. 12th-graders reported that they vaped nicotine in 2018. Alarmingly, a study found that teens that used e-cigarettes had three times the level of cancer-causing chemicals in a urine test than their non-using peers.

The New York CIty pharmacy ban includes e-cigarettes, but there are still too many avenues through which young people can buy these dangerous products. There is also a persistent, misleading narrative that e-cigarettes help people quit smoking, despite the blatant lack of evidence to support this assertion. Policymakers need to take comprehensive action to prevent the further spread of e-cigarettes by continuing to limit sales and launching comprehensive education programs, or we risk reversing decades of progress in curbing smoking.

While we celebrate the critical milestone achieved by this ban and its companion legislation, we must turn our attention to the next frontier in reducing the number of smokers and improving the health of all New Yorkers. There are still too many places to buy tobacco products, and the looming threat of e-cigarettes grows bigger every day. We’ve recognized the dangers of smoking for long enough, and it has only become clearer that increasingly firm action is critical to combatting this problem.