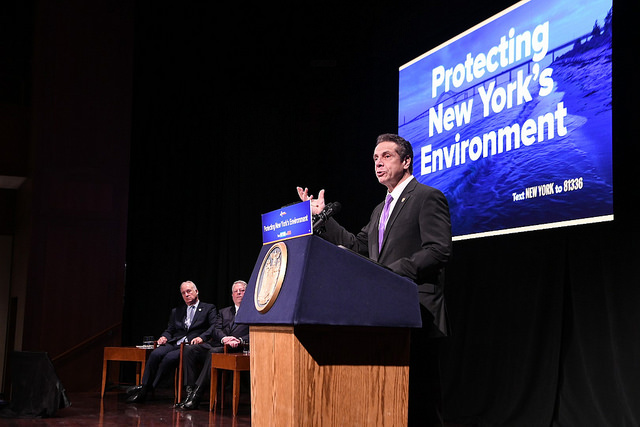 In outlining his agenda for the first 100 days of his third term, Governor Cuomo said in December he would launch a Green New Deal. I have been calling for a Green New Deal since 2010 in three Green Party gubernatorial campaigns against him.

Cuomo has already nominally adopted a number of my platform planks, including the fracking ban, marriage equality, a $15 minimum wage, tuition-free public college, paid family leave, and legalization of marijuana. Unfortunately, the implementation of some of these measures fall short of full realization and the same appears to be true for what will be Cuomo’s Green New Deal.

The Green Party’s Green New Deal would fulfill the full promise of the original New Deal as articulated by President Franklin Roosevelt in his last State of the Union address in 1944 when he called upon Congress to enact a second, economic bill of rights, including the rights to a job, an adequate income, decent housing, comprehensive health care, and a good education. What makes it a Green New Deal is that the rapid build out of a 100% clean energy system would provide the sustainable economic foundation for the realization of economic human rights for all.

The only specific measure Cuomo announced is a goal of 100% clean electricity by 2040. The reality is that electricity accounts for only about 20% of New York’s carbon emissions. We must also zero out the other 80% of greenhouse gas emissions in the transportation, buildings, industrial, commercial, and agricultural sectors. Cuomo’s Green New Deal thus falls far short of the reduction in carbon emissions that climate science indicates is needed to avert the tipping points of runaway global warming and a climate catastrophe of widespread extinctions, collapsing ecosystems, food and water shortages, generalized impoverishment, masses of climate refugees, and resource wars.

The recent International Panel on Climate Change report says net zero carbon emissions by 2050 across all sectors worldwide is needed in order to stay under a “safe” rise in global temperatures of 1.5 degrees Celsius (2.7 degrees Fahrenheit) above the pre-industrial temperature. The world already reached a rise of 1 degree Celsius (1.8 degrees Fahrenheit) in 2015. Because the UN’s IPPC reports have to be approved by the major petro-states and carbon emitters such as Saudi Arabia, Russia, China, Brazil, and the United States, their reports have consistently underestimated the pace of global warming and understated the measures needed to stem it. Independent studies by climate scientists such as NASA’s James Hansen and his colleagues conclude that global warming must be limited to 1 degree Celsius to avoid the tipping points of runaway warming, which requires carbon emissions to zero out in 15 years combined with drawing down existing atmospheric carbon through massive reforestation and rebuilding living soils through sustainable agriculture.

The good news is that a crash program for clean energy is economically and technically feasible. And make no mistake, this is an emergency that must be dealt with as such.

Following up on a 2009 study demonstrating the planetwide feasibility of 100% clean energy by 2030, Mark Jacobson and colleagues found in a 2013 study for New York that a 100% renewable energy system by 2030 was not only feasible, but would create an economic boom. It would create 4.5 million jobs construction and manufacturing jobs during the build out. It would improve public health (more than 3,000 New Yorkers die annually from air pollution) and lower electric rates up to 50% compared to the continued use of fossil and nuclear fuels.

A Green New Deal for New York should start with the NY Off Fossil Fuels Act (A5105A/S5908A), which halts all new fossil fuel infrastructure and creates a program for 100% clean energy by 2030.

The Off Fossil Fuels Act requires state, county, and local governments to adopt detailed, enforceable clean energy plans with two-year benchmarks, timelines, and reporting. It would require new buildings to have net zero carbon emissions by 2020 and new vehicles to be emissions free by 2025. It has strong environmental justice provisions for a “just transition” that ensures that low-income communities and communities of color, and communities dependent on fossil fuel and nuclear plants, are made whole in terms of jobs, wages, benefits, and tax revenues during the transition.

Governor Cuomo should use his authority under the Clean Water Act to deny permits to gas pipelines and power plants, which invariably negatively impact streams and watersheds. He should embrace the Renewable Heat Campaign to replace gas heating with ground- and air-source heat pumps. He should fix the existing Green Homes Green Jobs program to energy retrofit hundreds of thousands of homes for insulation, efficiency, and heat pumps. He should compel the DEC and NYSERDA to complete and report out their long-delayed study he asked for two years ago to plan a transition to 100% clean energy (a report we are now told will not be released).

Jacobson and colleagues put the capital cost for a 100% clean energy system at $460 billion. The $14 billion clean energy loan guarantee program of the 2009 Obama stimulus leveraged 47 times more in private investment. Using a conservative 10 to 1 leveraging ratio, a state investment of $46 billion would generate the $460 billion.

The money should come from a combination of taxes and lending. The pending bills for a progressive state carbon tax would generate at least $7 billion a year, more than enough to invest $4.6 billion a year over ten years. A carbon tax will enhance the leverage of public investments by creating predictable market signals for savings from private clean energy investments. A state public bank could extend the credit for private clean energy investments at lower cost than borrowing through Wall Street, with the interest and principal returning to the state for public purposes. Taking public ownership of all power utilities, and operating them at cost for public benefit instead of at cost-plus-profits for absentee owners, will enable us to plan the energy transition for lower cost and without obstruction from the vested interests of the incumbent utility, fossil fuel, and nuclear industries.

If these measures sound like democratic socialism, they are. The federal government nationalized 25% of U.S. manufacturing during World War II in order to turn industry on a dime to build the “arsenal of democracy” that defeated the Nazis. We need nothing less to defeat climate change.

***
Howie Hawkins is a three-time New York gubernatorial nominee of The Green Party and long-time climate activist. On Twitter @HowieHawkins.