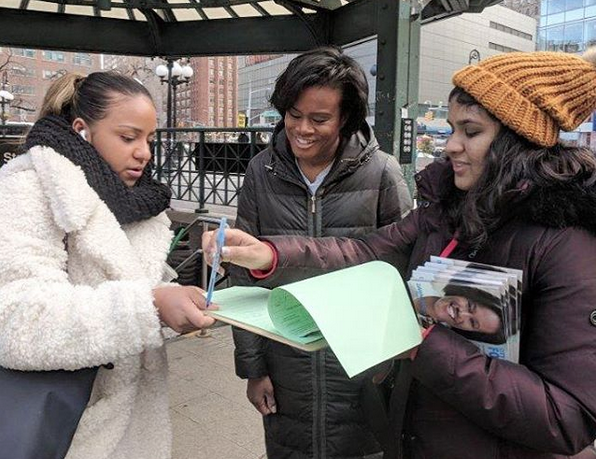 I say: no more delays.

New Yorkers have been placed in an impossible situation by government agencies and elected officials who seem to be at a standstill in providing them the services that are essential to daily life and in many cases are inefficient, antiquated - or straight up broken.

The subway that built this city and made it great is crumbling beneath our feet, affordable housing is not affordable for working families, the homeless crisis is increasing at alarming rates among women and children, and democracy reforms in New York have been woefully behind other states that are considered far less progressive.

Given the New York City Public Advocate’s mandate to serve as a watchdog, these issues require someone who is experienced in government agencies to break through the bureaucracy.

When I was Executive Secretary at the Federal Department of Health and Human Services I was part of the leadership team that made the Affordable Care Act a reality for millions of Americans. We were so proud to have passed this landmark legislation - but passing the law was only the first step. I often had to wade and ultimately break through the bureaucracy to deliver on our mission to provide affordable, comprehensive health care. I intend to bring the same focus to the Public Advocate’s office.

That’s why I’m running on the party line “No More Delays” on the February 26 ballot and focused on four key areas where we must make rapid progress.

Transit
New Yorkers cannot wait on the platform while the Mayor and Governor bicker over the subway.

The subway is the heart of the city; without it, the city cannot function. As a candidate I am advocating for fair fares, more and better buses, and full transparency and accountability as solutions are proposed by the Mayor and the Governor to get the system on track -- and I will continue to do so as the next Public Advocate. I will also call out any proposals that divert resources from the infrastructure improvements necessary to ensure the system can function.

I believe the Public Advocate has a responsibility to speak to any stakeholder that impacts the way services are provided to our communities. That includes the Governor and federal agencies that provide funding for city government. If the Mayor can go to Paris, the Public Advocate can go to Albany and D.C.

Housing
New Yorkers cannot spend another day searching for an affordable place to live while developer interests continue to be placed above community interests.

We cannot continue to allow working class New Yorkers who are the bedrock of this city to be forced out because they can’t afford to live here.

We need to ensure that commitments to build affordable housing really are affordable for the residents that currently live in the neighborhood. Housing stock needs to meet levels of deep affordability and developers need to be monitored and held accountable for the commitments they make toward affordable housing. Additionally, developers should be required to contribute to infrastructure in the neighborhoods where they build and investments in street repairs, schools or parks should be discussed and prioritized with input from the local community.

Homelessness
New Yorkers, especially women and children, cannot bear the instability of being shuffled from shelter to shelter.

We have to confront, head on, the remarkable number of families that are homeless in this city. There are more children under the age of six living in homeless shelters than adult men. Women and children living in shelters should be given preference to be placed in permanent housing.

As a mother of three who is living, working, and raising my children in this city, I am aware of the social and emotional needs of these young children and how the lack of a stable home affects their emotional wellbeing and development. To help children create much-needed routine stability in their lives, I’d advocate for ‘Children’s Advocates’ to help homeless and low-income families navigate the school system and other services that will help children feel safe and secure.

Voting
New Yorkers should not be waiting hours in lines wrapped around the block on election day due to antiquated systems and broken machines.

In New York City, just 12% of eligible voters showed up for the 2017 primary. This is shameful anywhere, but certainly for a place that puts itself forward as one of the most progressive in the nation.

I’ve managed tens of millions of dollars in grants at the Ford Foundation and the Open Society Foundation promoting community organizing, political reform, and civic engagement. Now that New York State is passing a slate of voting reforms, the Public Advocate will play a key role in making sure these new laws are implemented properly, and swiftly for New Yorkers.

I’m running to be New York City’s next Public Advocate because as an African-American, a woman, and a mother, I believe government is a force for good, and one of the most impactful ways to improve people’s lives -- but only if it works. I’ve spent my career as an advocate, carrying out the belief that no problem is too big to solve, and no amount of bureaucracy or infighting will stop me from getting a job done.

As a first-time candidate who is completely independent of the local power structure, I am uniquely qualified for the office of Public Advocate. I have the experience, the knowhow, and the wherewithal to bring New Yorkers what they deserve: a government that works and works to serve to serve them. I hope to earn your support in the election on February 26.

***
Dawn Smalls is an attorney and former foundation leader and member of the Clinton and Obama presidential administrations. She is a candidate for Public Advocate and on Twitter @DawnForNewYork.