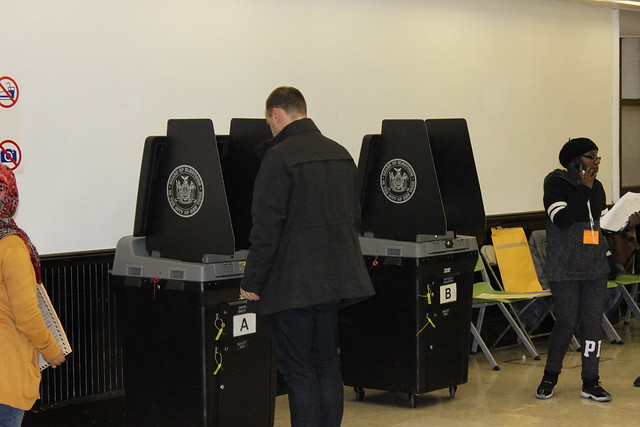 In the coming days, the Board of Elections will select a vendor to provide voting machines to serve nearly 5 million New York City voters as part of the early voting launch this year. Unfortunately, the entire process has become tainted by corruption and ought to raise deep concerns to anyone who cares about the integrity of our elections.

Over the past decade, New York City has paid $43 million to Elections Systems & Software (ES&S) for its poor quality ballot scanners and other voting machines. This is the same company that showered Board of Elections Executive Director Michael Ryan with perks including luxury travel and dining expenses in Las Vegas and other destinations.

Although Ryan was forced to step down from his advisory role at ES&S after his conflict of interest was exposed by NY1, he still brazenly lobbied the state for fast-track approval of the company’s touch screen voting machine – ExpressVote XL – that is less secure and twice as expensive as systems that print paper ballots. It is vulnerable to hacking, interference, and other glitches. Put simply, this may be one of the worst voting machines in the country.

Fortunately, the State Board of Elections rejected the City BOE’s request to bypass the certification process, but it did not close the door on approving this garbage machine for future elections. In the meantime, however, the City must select a new voting system for 2019 and beyond.

Ryan’s conduct illustrates that the Board of Elections cannot be trusted to make a decision that’s in the best interest of the public. There is no question that the mutual back scratching between election machine vendors and the agency is out of control.

But with a decision coming soon, what can we do to protect democracy?

For starters, Michael Ryan must be replaced. His mishandling of last year’s midterm elections, which were marred by endless lines, long waits, and machine malfunctions, is grounds for removal alone. Short of that, he must be recused from any decisions related to voting machine contracts. Any other members with ties to voting machine companies must be held accountable, and all commissioners should be disqualified from the Board if they do not approve voting technology that is secure and provides a paper record.

In the longer term, comprehensive Board of Elections reforms are needed, including a wholesale revamp of the oversight structure by lawmakers in Albany. At the absolute minimum, companies with business before the Board of Elections should be barred from lavishing perks on decision-makers, and local party bosses should not be handpicking the Board members.

This is an odd moment. Albany is finally taking action to improve access to the ballot box, while the New York City Board of Elections is moving deeper into the era of smoke filled rooms. While pay-to-play politics is nothing new in this state, we can’t become numb to corruption that undermines New Yorkers’ fundamental right to vote. There is still time to get this right. Through public pressure and support from reform-minded officials, we can force the city and state to protect voting rights, not shady voting machine companies.

***
Jonathan Westin is the executive director of New York Communities for Change. On Twitter @jwestin2 & @nycchange.