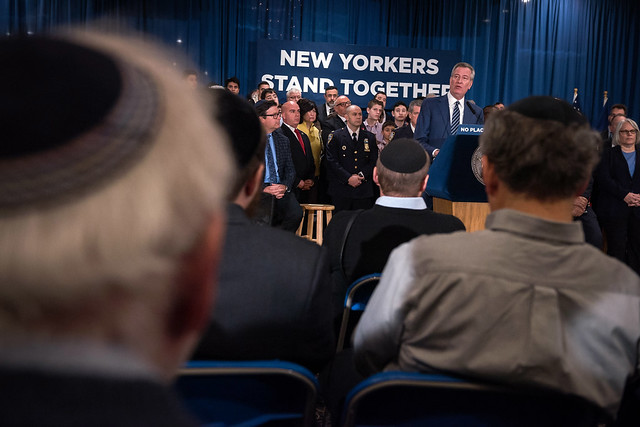 Like so many Jews, we are horrified and dismayed at the recent attacks on visibly Jewish people in New York City, in particular Hasidic and Haredi men. Anti-Semitic violence is on the upswing in the U.S. and in our city.

The NYPD reported 145 hate crimes between January and April; 82 of those incidents, 57%, were anti-Jewish. Hate crimes in general rose 67% in the first quarter of this year, and anti-Semitic hate crimes in particular increased by 82% over a similar period last year. White Christian nationalist violence, stoked by the election of Donald Trump, is on the rise — from New Zealand to New York.

This trend is unacceptable, but we can’t arrest or guard our way to real safety — the solution lies with communities.

Between attacks on Jewish people on the streets of New York, and the murders of Jews in our synagogues in Pittsburgh and Poway, we know that we need to address security concerns in a new way. So we understand why 39 members of the New York City Council, led by members of the Council’s Jewish Caucus, recently signed a letter urging Mayor de Blasio to use city funds to pay for armed, off-duty NYPD officers to guard houses of worship.

We all want to feel safe, especially in our churches, synagogues, and mosques, but city-funded armed police guards actually make some of us less safe, and cause many Jewish people of color, especially black Jews, to feel unwelcome in Jewish institutions. The truth is, policing cannot solve our problems — we will never arrest our way out of anti-Semitism.

As the city struggles to find money to deal with crises in homelessness, public housing, education, and more, paying cops to be security guards represents a back-door source of additional funding for the NYPD. This only escalates New York’s dramatic over-investment in the security state, instead of investing in our future.

We refuse to downplay the profound threat of anti-Semitic violence, or to dismiss the real fear and pain our community feels in this moment; yet we believe that there is a better way for the Jewish community to protect itself: by preventing hate violence in the first place. Armed guards are not a panacea — data show that the presence of police can actually attract shooters, and that, too often, police officers shoot bystanders in response to an attack, increasing the bloodshed rather than preventing it. In addition, arresting a suspect after an incident does not address the underlying tensions and ideologies that lead to hate violence; and increased penalties for hate crimes are unlikely to deter assailants from committing acts of violence.

Further, because communities of color are systematically overpoliced, a response to hate violence that emphasizes policing will inevitably have a negative impact on those communities, and reinforce the racist narrative that black people are more responsible for anti-Semitism than white Christians and other groups. (According to the NYPD’s own statistics, of the 69 anti-Jewish hate crimes in 2018 that resulted in an arrest, 40 of the alleged perpetrators were white, while 25 were black; nationally, from 2009–2018, 73% of all fatalities by violent extremists were caused by right wing actors.)

If we want to focus on prevention in New York City, the best approach is the Hate Violence Prevention Initiative that a coalition of Jewish, Arab, LGBTQ, and immigrant community organizations have presented to the New York City Council. The communities that these groups represent share a mutual interest in standing up to hate-motivated violence and white nationalism. All of us understand that hate violence and bias incidents can only be prevented in local communities, by local communities — not by police or prosecutors.

We need approaches that prevent violence through education and community-building, interrupt violence through community-based upstander/bystander trainings and rapid response at the local level, and repair damage through restorative justice, counseling, and peer-support. We oppose “zero tolerance” policies — an approach that is geared toward impressive sound bites, not effective hate violence reduction.

"As a Jew of color, the initiative's focus on restorative justice also works better to provide safety for my community and all Jews, not only white Jews. A police presence outside a house of worship puts black Jews in danger." —co-author Arielle Korman

If we are serious about confronting the rise in hate crimes, we need an approach led by organizations in affected communities that is designed to confront the white supremacist ideology and anti-Semitic ideas fueling those crimes, and to ease the intra-communal tensions that surface them.

Up until now, the city has profoundly under-funded this type of approach. The dominant response to all hate violence incidents has been to call for increased policing and the filing of hate-crimes charges. We can do better. The recent arrest of a 12-year-old for chalking swastikas on a school playground demonstrates just how far we are from a targeted and proportional response that is likely to reduce hate violence in the future.

We find the rise in attacks on Jews terrifying but we know we’re not alone. We are inspired by the outpouring of care and solidarity from our neighbors when incidents of hate violence occur, and we are proud of the ways that many Jews have shown up for others in these difficult times.

For better or for worse, many of New York’s communities have a stake in standing up to right-wing, white nationalist ideology and the violence that it inspires. We believe that the only effective response to hate violence is one that cuts these ideas off at the root, and that binds together all of the communities impacted by bigotry — not one that pits us against each other.

***
Martha A. Ackelsberg is the William R. Kenan Jr. Professor Emerita of Government and Professor Emerita of the Study of Women & Gender, an author, and a member leader at Jews For Racial & Economic Justice (JFREJ). Arielle Korman is a graduate student at Columbia University, a cultural organizer, a member leader at JFREJ, and a co-founder of JFREJ’s Jews of Color Torah Academy.