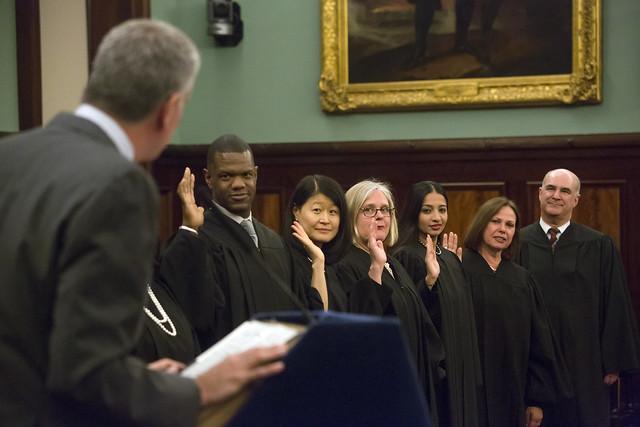 On June 25, Brooklyn Democrats will hold a primary to select the Democratic candidates for judges of the Civil Court and judge of the Surrogate Court.

New York has a convoluted system for selecting judges. Some are appointed by the Governor. Criminal and Family Court judges in New York City are appointed by the Mayor. Candidates for Supreme Court are nominated at a judicial nominating convention, while candidates for Civil Court and Surrogate Court are elected through a traditional primary election.

This convoluted system undermines the goal of a merit-based selection of judges, is almost entirely dominated by Democratic Party leaders, and lacks controls to prevent an unqualified candidate from becoming a judge.

Take, for example, this year’s primary for judge of the Surrogate Court. Judge Margarita Lopez Torres is running for reelection. She is an excellent judge who famously refused to give a patronage job at the direction of the then-Brooklyn Democratic Party boss, Clarence Norman, who would go on to serve a prison sentence for corruption.

As a result of her “defiance,” party leaders, who controlled the judicial nominating convention, blocked her from seeking election to the New York Supreme Court. She became the plaintiff in a lawsuit claiming the way New York elects Supreme Court judges was unconstitutional, which would eventually lose at the U.S. Supreme Court.

Her 14-year term now up, she faces a bitter primary from two opponents in her bid for reelection. Meredith Jones, while found qualified to be a judge of the Surrogate Court, is running at the behest of allies of the disgraced party boss whom Judge Lopez Torres spurned close to two decades ago and who are using the primary to seek retribution. The other primary opponent, Judge Elena Baron, is a sitting Civil Court judge elected only two years ago. After declining to appear before the New York City Bar Association for what she said are ethical concerns with the panel because the attorneys appear before judges that they rate, she was deemed "not approved." Her campaign is being run by a notorious political consultant who uses judicial elections as an opportunity to make money while “sticking it to the machine.” (I have endorsed Judge Lopez Torres in my capacity as an elected District Leader for Brooklyn's 44th Assembly District.*)

There are only two Surrogate Court judges in Brooklyn. They will decide thousands of sensitive cases dealing with complicated end-of-life issues. If Judge Baron were elected, 50% of cases would be heard a judge who should not be presiding over them. This does not “stick it to the machine.” It sticks it to the grieving Brooklynites going through the Surrogate Court to carry out the last wishes of their departed loved ones.

Likewise, the primary for Civil Court judge from the 6th Municipal District (where I live) features a candidate, Tehilah Berman, found not approved by both the Brooklyn Democratic Party screening panel and the New York City Bar Association.

Our legal system depends upon public confidence in the quality and integrity of the judges hearing our cases. Judge Berman's election to the Civil Court would be a mistake given her lack of relevant experience, including next to no litigation experience. When I recently confronted her about her lack of qualifications, her campaign manager sent me a message on Facebook threatening, “next time you will deal with me or one of my team members.”

It is time for New York to abolish judicial elections altogether in favor of a unitary merit-based appointive system. While appointment of judges is not without the potential for political influence, it would exponentially reduce the vice grip that the Democratic Party machine has on election of judges to the Supreme Court and significantly reduce the likelihood of an unqualified candidate becoming a judge of any court.

Likewise, there are highly-qualified attorneys who don’t seek judgeships because they refuse to play in the swamp of the current system, but would absolutely seek appointment in a merit-based system.

Finally, mechanisms can be implemented to reduce the influence of politics in the selection of judges. For example, under the current mayor, there is an open application process and the office responsible for political appointments plays no role in the evaluation and recommendation of applicants.

That said, the primary election is next week away and we have to vote in the system we currently have.

So, I ask all Brooklynites, before you vote, please do your research. Information about judicial candidates is often scant. But this year, many of the judges have Facebook pages and campaign websites. Visit them. New Kings Democrats have put out an excellent, much welcome and needed judicial election guide. Read it.

When unqualified judges get elected, two people win -- the unqualified judge and their campaign consultant. Hundreds of thousands of Brooklynites lose. These are real people, with real legal problems, who deserve to have their cases decided by real judges.

***
Doug Schneider is the Democratic District Leader for the 44th Assembly District covering parts of Park Slope, Windsor Terrace, Kensington, Boro Park, Midwood, and Ditmas. *He has endorsed candidates in three judicial races, two mentioned above (Judge Lopez Torres and Caroline Cohen for Civil Court from the 6th Judicial District, as well as D. Bernadette Neckles for Civil Court countywide). Although unofficial, for Supreme Court he has one of 42 votes in nominating Democratic candidates, a power he is advocating to end. On Twitter @DougSchneiderBK.

Note: this article has been corrected to remove characterization of Baron's recommendation from the NYC Bar Association as "unqualified." The recommendation was "not approved."