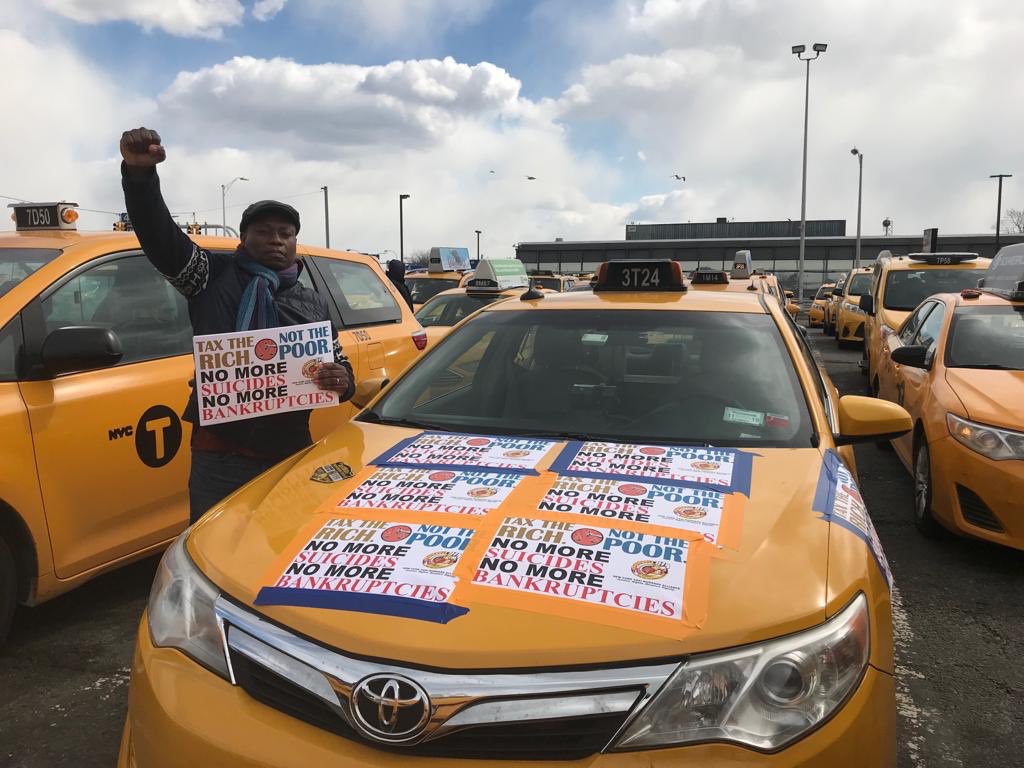 When financial bubbles burst, it’s almost always regular people whose lives are ruined. The fraudsters and scammers often avoid serious consequences. So it was with America’s mortgage crisis in 2008. And so it has been with New York City’s own home-grown mortgage meltdown: the collapse of yellow taxi medallion values since 2014, which has had a devastating impact on the lives of thousands of yellow taxi drivers.

New York City only allows a fixed number of the iconic yellow taxis on its streets--creating over the decades a consistent, recession-proof source of income for drivers. The medallion that taxis are required to affix to their hoods was an asset that commanded a steady, solid price. For countless immigrants, owning a medallion meant that the grueling work of a taxi driver could offer a path to the middle class.

Then in the early 2000s medallion prices began rising from their historically stable value of about $200,000, to a dizzying peak of over $1 million by 2014.

The medallion bubble was pumped up in part by the same forces that caused the housing mortgage crisis. Industry lenders and brokers exploited vulnerable borrowers. And thousands of owner-drivers ended up with monthly mortgage payments of as much as $4,500, an oppressive sum for workers whose earnings from fares and tips, after expenses, may only amount to $5,000 per month.

Then, in 2014, the bottom fell out. The value of medallions plummeted in the past five years, losing 80 percent off their peak. Drivers and their families who invested their life savings to purchase this asset now face financial ruin. For some the pressure has been unbearable. At least three yellow taxi drivers burdened by debt have taken their own lives.

There is no shortage of parties to blame for this debacle: overly aggressive lenders, lax financial regulators, shady loan brokers.

And then there’s New York City government -- which directly contributed to this crisis.

In 2004 the City began auctioning off new medallions to plug budget gaps. This gave the very people overseeing the industry an interest in pumping up valuations. And that’s exactly what they did.

Ads run by the City called the investments “better than the stock market,” implying medallion values would continue to rise. The City agency that regulates the taxi industry failed to act in the midst of glaring signs of financially questionable transactions and price collusion among major players.

And the City didn’t just pump up the bubble, it also inadvertently expedited its bursting, by failing to manage the explosive growth of Uber and Lyft, which flooded the streets with upwards of 80,000 new vehicles, and used their rich valuations to undercut the regulated taxi fares.

Along the way, the City made hundreds of millions of dollars in sales at medallion auctions, including a round as late as 2014 when it set the minimum medallion bid price at a staggering $850,000, despite the fact that it was already clear by then that these assets were poised to decline.

The City profited handsomely from the medallion bubble. Now we owe a moral debt to the thousands of New Yorkers whose lives have been ruined.

The City needs to consider dramatic plans for securing loan forgiveness for owner-drivers, so that medallion mortgage payments are capped at reasonable levels -- and no driver is ever again forced to live on $500 per month after expenses.

We need to create a retirement fund for drivers as well, so those struggling with medallion payments no longer need to keep driving into their 60s, 70s, and even 80s just to make payments. The hard-working drivers who have kept our city moving for decades deserve to be able to retire with dignity.

And we should do something impactful now that would help bring immediate relief: hire an attorney for each and every one of the driver-owners with underwater mortgages.

At present the vast majority of drivers going through foreclosure proceedings are doing so without representation by an attorney, putting them at a severe disadvantage. Likewise, most have no attorney to support them in the complicated process of mortgage renegotiation. The New York Taxi Workers Alliance has provided legal support to hundreds -- but there are thousands more still in need of help. We need a robust investment by the City to close this gap. Any cost for a legal assistance program will be miniscule relative to the $850 million windfall the City reaped from the sale of medallions during the bubble years.

Lenders will have to be pressured to sit down in good faith with drivers and their representatives. The City should not be afraid to publicly call out any banks, credit unions, and hedge funds that refuse to adjust loan terms. As was the case in the housing mortgage scandal, lenders are not immune to public shaming. Statements from federal and state regulators voicing support for renegotiation of the loans would also be extremely helpful.

One thing is clear: the City helped create the medallion crisis, and we have an obligation to help fix it.

We cannot undo the damage done to thousands of lives -- some of which have already been lost -- by this scandal. But we as a city can at least do everything in our power to ensure that, for once, regular people are not abandoned while the wealthy and powerful skate away unscathed.