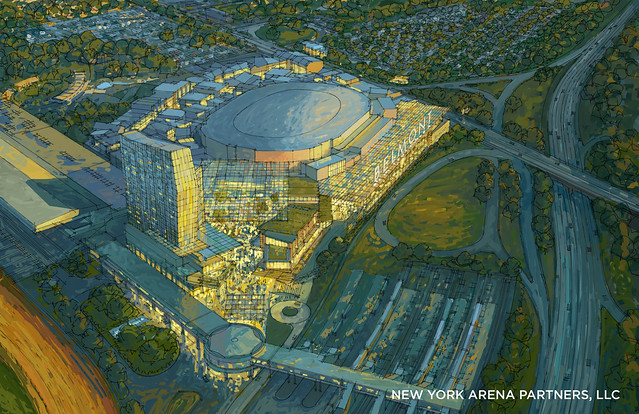 Three lessons from the long battle over Atlantic Yards/Pacific Park and the Barclays Center in Brooklyn are that promises of huge financial benefits deserve skepticism, that independent studies trump promotional ones, and that scenarios should be presented as a range of outcomes, rather than just the best case.

Unfortunately, those lessons have been ignored regarding the new sports-and-entertainment arena complex planned at Belmont Park in western Nassau County, with the New York Islanders as anchor tenant and Gov. Andrew Cuomo, surely anticipating a big ribbon-cutting in 2021, as the chief cheerleader.

The near-final step toward approval of “the transformational $1.26 billion Belmont Park Redevelopment Project” came in a Cuomo press release July 8 announcing that a new Long Island Rail Road station would help serve the project, which also includes a hotel and “luxury outlet stores.” (That retail, as I explain below, might be the priority for the Islanders’ owners.)

The press release came with a chorus of praise—the new station might lessen the likelihood of arena-related traffic chaos—but left seeds for doubt.

Unfortunately, as the project comment period ends August 1 and approval votes loom soon after, the Cuomo administration has obfuscated public assistance for the station and an overall deal that gives the developers the project land essentially rent-free, while presenting an economic benefits analysis with glaring gaps, and delaying the delivery of promised data.

Who’s paying for the station?
The estimated cost of the station is $105 million. According to the press release, “The arena developer will cover $97 million— 92 percent of the total cost — and the State will invest $8 million.” The developer is New York Arena Partners, or NYAP, involving Sterling Equities, the Scott Malkin Group (Islanders’ owners), Madison Square Garden, and the Oak View Group.

That scenario was belied by a “Fiscal and Economic Benefits” report attached to the Final Environmental Impact Statement (or Final EIS), which said NYAP would initially contribute $30 million for that new station, then pay $67 million over the course of 30 years.

By contrast, Neil deMause, writing in Gothamist, estimated that the financing offered a $33 million public bonus to the developers.

To me, it recalled the 2009 deal in which Forest City Ratner, which had bid $100 million for the right to build over the Metropolitan Transportation Authority’s Vanderbilt Yard in Brooklyn, negotiated relaxed terms: permission to put $20 million down (for the parcel necessary for the Barclays Center), then pay, over 21 years, the equivalent of $80 million in 2009 dollars: approximately $173 million, at an implied 6.5% interest rate.

Four days after Cuomo’s announcement, Newsday reported that NYAP was, in fact, getting the equivalent of interest-free financing for the station, and was essentially getting the entire 43-acre site in exchange for payments being reinvested into project infrastructure. One sports economist quoted in the story thought the rail deal was fair while another thought the deal might stimulate the economy, even if the land was a bargain.

New public revenue?
I have more doubts, and not just because of Cuomo’s record on transparency. Consider: the ESD board meeting July 8 to accept the Final EIS was scheduled with exactly one business day’s notice, a decision that provoked project opponents to protest to the Joint Commission on Public Ethics (JCOPE).

Sure, building on underutilized land adds significant jobs and tax revenues, especially from the retail, but Cuomo’s numbers deserve scrutiny rather than blind endorsement.

The state's fiscal estimates ignore the cost of additional public services and infrastructure, as well as the value of various tax exemptions. Unbiased agencies, like the New York City Independent Budget Office, typically weigh benefits and costs. The watchdog group Reinvent Albany has asked ESD for an analysis of Belmont subsidies, without results. (In Streetsblog, Reinvent Albany also raised several questions about the new train station, including operating costs and cost overruns.)

Moreover, the report by BJH Advisors performed for Cuomo doesn’t consider “whether the spending and jobs are moving from one site presently in New York State to the new project location.” That’s said to be reasonable, “given the type and unique nature of the retail uses and the newly generated demand for hotel and accommodation services.”

Maybe, but that excludes the nearby Nassau Coliseum, clearly an arena rival, as explained below.

The new luxury outlet mall
And if, as the state says, “there are currently no direct comparable development [sic] to Value Retail's luxury outlet product within the United States,” shouldn’t the developers of such high-end retail be paying for the land?

We haven’t heard much about Value Retail, founded by Islanders’ co-owner Malkin, but Belmont would represent the first United States example of a successful European chain, of which Bicester Village, not far from London, is now the United Kingdom’s second-busiest attraction and generates more sales per square foot than any retail outlet in the world.

No wonder Value Retail founder Malkin has let Islanders’ co-owner Jon Ledecky be the public face of the project.

Along with that initial $30 million payment for the station, NYAP will pay $20 million upfront for Project Site infrastructure. However, these payments fulfill the developer’s seemingly sweet land lease: announced at just $40 million to control 43 acres for 49 years.

So, instead of paying New York for the site, that money—plus an extra $10 million—goes back into the project.

What about the appraisal?
Is the land worth just $40 million (or even $50 million)? The annual payment, per acre, is but 10 percent of the cost paid for the right to build a “racino” at Aqueduct, another racetrack. In March 2018, ESD promised the Village Voice an appraisal would be done before “the conclusion of the environmental review in 2019.”

Apparently appraisals exist. ESD, in the Response to Comments Chapter of the Final EIS released July 8, said that “The transaction between ESD and the Applicant is a fair market transaction confirmed by appraisals received by ESD.”

However, ESD has not released them. Despite that July 8 statement, Newsday reported five days later that an appraisal would be complete “in the coming weeks”—just in time for the final approval votes.

The Belmont process suffers from opacity, as I’ve written. A rival bidder for the site withdrew in 2017, citing (to Long Island Business News) “extraordinary requirements, preconditions and reviews” that pointed to a wired deal for a hockey arena; LIBN’s editor opined that the state “only solicited proposals tailor-made for the Islanders and their well-heeled backers.”

Impact on the Coliseum
The claim that spending and jobs won’t move within the state has a huge blind spot: the county-owned Nassau Coliseum, less than ten miles away. The state review fudges the new arena’s likely devastating impact on the Islanders’ former (and now part-time) home, which, after being downsized and renovated, seats only 13,900 for hockey—too small for the National Hockey League—and up to 15,000 for concerts.

The new arena would seat 18,000 for hockey and up to 19,000 for concerts—and, of course, would contain many more luxury suites. Unlike Barclays, announced in 2012 as the Islanders’ new permanent home as of 2015 but making an awkward fit for the team, it would be built to accommodate hockey.

Asked in the public comment period about the need for another arena, the state responded, “The arena would meet the demand for larger events that cannot be hosted at smaller venues such as Nassau Coliseum.”

Well, it might meet the demand for Islanders games. But it’s dubious that the Coliseum couldn’t host “larger events.” Even at Barclays, which offers far better transit access and a denser population nearby, only a few supernova performers, like Jay-Z and Barbra Streisand, have consistently sold out, while concerts averaged between 9.711 and 11,944 over the first four years, as I reported. Even the Belmont Final EIS (Chapter 7) notes that non-sporting events at Barclays averaged 8,468.

“Assuming the above-described events were to sell out at the utilization levels indicated, attendance on arena event days would average approximately 15,000 patrons,” the document states. That’s extremely dubious. Even Madison Square Garden—the region’s premier event venue, in the heart of Manhattan—falls short, averaging 14,825 for non-sporting events, as acknowledged elsewhere in the Final EIS.

If the attendance estimates are overblown, that also lowers the expected number of jobs, and tax revenue from new spending, further undermining the projections.

Dancing around the damage
Another commenter during the environmental review asked how, if visitors to non-sporting events are expected—according to a previous project document—from “a catchment area of no more than a 20-30 minute drive to the arena,” Belmont would compete with the Coliseum.

The ESD response acknowledged that the arenas “would overlap significantly,” but asserted that “both venues attract visitors from throughout the entire MSA [Metropolitan Statistical Area], which is significantly large enough to absorb the additional supply of events and entertainment.”

That’s an astounding leap of logic. The MSA, while it contains 20 million people, extends to New Jersey and even Pennsylvania. How many people would travel long distances to attend shows at Belmont? Remember, many Islanders fans decided they had little interest in attending weeknight games at Barclays, the team’s temporary home, given the travel commitment. In other words, demand depends on logistics.

The response, however, continued in fantasyland: “One venue might focus on larger shows, both venues could host the same acts on different nights, or perhaps host events marketed at different audiences.”

Sure, events are marketed to different audiences. But most shows too big for the Coliseum don’t exist, as attendance figures show. As to hosting “the same acts on different nights,” that’s not just dubious business practice—why would an arena coordinate with a rival?—but also a logistical nightmare: why would an act that has loaded in equipment and sets move nearby for a second performance?

Where’s the audience?
The Final EIS Socioeconomic Conditions chapter claims that “the Nassau Coliseum would continue to focus on smaller-scale events than those hosted at the Barclays Center and the proposed [Belmont] arena.” When that passage appeared in the Draft EIS, I pointed out—in a January op-ed for the Daily News—that the Coliseum relies on family shows, which Belmont plans to pursue.

That contention remains un-rebutted. Instead, both the Draft and Final documents confidently assert, “Overall, the metro area is considered sufficiently large to comfortably absorb additional non-sporting events from the proposed arena without having a significant impact on the existing venues.”

***
Norman Oder is a Brooklyn journalist who writes the daily blog Atlantic Yards/Pacific Park Report and is working on a book about the project. On Twitter @AYReport.

Note: this piece has been updated: the original version referenced the 15,000 attendance estimate without including the Islanders' games, and didn't clarify that the MSG attendance figures were for non-sporting events.