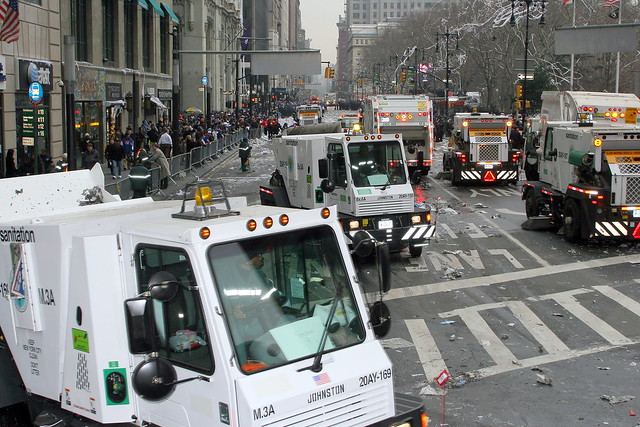 Environmental advocates and labor unions are dissatisfied with New York City’s system of collecting garbage from commercial establishments. Unlike waste from residences, including apartment buildings, which is collected by the city’s Department of Sanitation, waste from office buildings, retail businesses, and restaurants is collected by for-hire companies that charge their customers fees for the service.

Environmentalists decry the traffic and pollution caused by multiple different waste collection companies’ trucks driving all over the city on uncoordinated routes and schedules. Labor unions are concerned about the reliance of many of the smaller waste-haulers on non-unionized workers with low salaries, no benefits, and relatively little in the way of safety protections. These concerns were highlighted by fatal crashes that led to the shutdown of one waste hauling company.

My former organization, Citizens Budget Commission, has long been concerned about the high costs of New York City’s waste disposal practices; as CBC President I first testified about this issue before the City Council Committee on Sanitation and Solid Waste Management in October 2011.

We published a comprehensive analysis of city solid waste management in 2014. With respect to commercial waste collection, CBC noted that the high number of private carters (as many as 250 in 2014, including those that handle only special types of waste such as construction and medical) has kept collection prices low and minimized corruption, but a more efficient zoned system would minimize congestion and greenhouse gas emissions:

“...the City should shift from “open” competition to competitively awarded franchises for service in designated districts. The franchise should not be given exclusively to one carter but instead limited to a small number of firms. Such “non-exclusive” franchises allow for greater competition and provide greater opportunity for small and medium size businesses to compete…The franchise agreements should include standards for worker safety and vehicle environmental performance.”

In November 2018, after two years of study and consultation with stakeholders, the Department of Sanitation released a reform plan that largely reflects CBC’s recommendations. As the City Council appears close to movement on solid waste management reform, it would be wise to quickly adopt legislation that includes the key tenets of what CBC and Sanitation have put forward, so that an aggressive but careful multi-year implementation process can begin.

Sanitation proposes a Commercial Waste Zone (CWZ) program that would divide the city into 20 zones. Within each zone carters would compete to win city contracts to provide waste collection services. Three to five carters would be selected in each zone, depending on the density of commercial activity in the zone. Selected carters would have to specify a maximum price, offer recycling and organic collection at discounted rates, and comply with vehicle emission standards. The contracts would last 10 years and the first awards would be made in 2021 with the system to be phased in over the following two years, 2022-2023.

CWZs would be a dramatic change and all change meets resistance. Some carters are opposed to limiting the number of franchisees, fearing that they would not be able to compete and would go out of business. Businesses, especially large ones that are now able to drive a hard bargain, are concerned that collection fees will increase and they will have little leverage to control costs. They also want flexibility to be able to change trash haulers if they believe they can get a better deal or performance isn’t meeting expectations.

Environmentalists contend that there should be only one carter per zone to achieve the maximum reduction in greenhouse gas emissions. Labor unions want the better salary and benefits that union-only employees would receive and that only very large collection firms that have exclusive franchises can assure.

The City Council Sanitation Committee chair, Antonio Reynoso, has been a strong advocate of some environmentally–oriented waste management policies, like charging for single-use plastic bags and curbside collection of organic waste. Now, he has taken the lead on CWZs by introducing legislation to create franchise zones.

His bill provides for only one franchisee per zone. The enviro/labor groups are pleased, but the business community is very concerned about the prospect of dramatically increased waste collection fees and a loss of customer choice. They point to the recent experience in Los Angeles, which adopted single-vendor zones and prices for some companies quadrupled.  (The LA system is quite different and much larger and more expensive in that it applies to multi-family residential as well as commercial waste collection.)

As they say, the mark of a good compromise is that all stakeholders are somewhat dissatisfied. CWZs will require significant readjustments by the Department of Sanitation, the city’s Business Integrity Commission ( which licenses carters), the business community, and the waste collection industry; it would be wise to move resolutely but carefully.

Moving from what is essentially a free-for-all to a highly constrained and regulated system is probably too much to do all at once. The Department of Sanitation’s proposal to allow several franchisees per zone would give businesses some price and quality leverage to select among a few competitor vendors. It would enable some of the smaller waste haulers to remain in business while elevating the quality of equipment and safety of the industry citywide.

Studies indicate that as much as 85% of the greenhouse gas emission reductions to be gained from a CWZ system would be achieved by limiting franchisees to a small number. So while it may not be the more categorical result that some would prefer, let’s hope that the Council doesn’t let the perfect become the enemy of the very good.

The Sanitation Department’s proposal is a thoughtful balancing of interests and concerns. Hopefully some areas of compromise can be found so that the Council can adopt CWZ legislation in the fall and adjustments can be made, if needed, after the city has some experience with the new system. But the time to act is now.