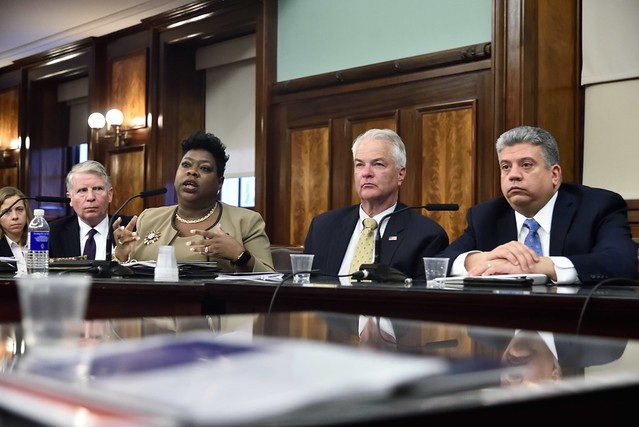 The new law fails to address the disparate impact of the pernicious enforcement of marijuana use as grounds for parole and probation violations, but thankfully will allow people already convicted of low-level marijuana possession to have those charges expunged from their criminal records.

This law is an important legislative step towards addressing the over-policing and over-prosecution of our communities, and brings about a statewide change that has already been successfully piloted in parts of New York City thanks to local prosecutors’ sound use of their discretionary power.

These efforts have been mirrored in other states as well. Baltimore District Attorney Marilyn Mosby rightly announced in February that “prosecuting [marijuana] cases ha[s] no public safety value, disproportionately impacts communities of color and erodes public trust, and is a costly and counterproductive use of limited resources.”

Prosecutors across the country should follow the example of these district attorneys. Using their powers, prosecutors don’t need to wait for state or federal marijuana decriminalization or legalization to provide justice.

Prosecutors use their discretion every day to tailor their recommendations on cases; the decision to decline to prosecute certain crimes that do not affect public safety is one way prosecutors should use that discretion to reduce the negative impact of the criminal justice system on communities of color, build trust with the communities they serve, and reduce interactions with the criminal justice system that may cause harm despite benign intent on the part of the system.

Regardless of the outcome of any particular case, contact with the criminal justice system can affect an individual’s employment, interrupt child care, and make community members feel unsafe due to unnecessary system pressure. For prosecutors managing offices with heavy caseloads, the decision to decline to prosecute cases that do not increase public safety is also a strategic one. By lowering caseloads, prosecutors are able to reallocate resources to finding

innovative, evidence-based, restorative responses to serious crimes that cause true harm to our communities.

Local prosecutors across the country have the potential to impact countless people through the thoughtful use of their discretion in ways that reflect local values while prioritizing the safety of all. As New York has demonstrated, prosecutors need not wait on state or national legislative solutions to enact policies that will help enable communities to thrive.

***
Lucy Lang is the Executive Director of the Institute for Innovation in Prosecution at John Jay College of Criminal Justice. On Twitter @LucyLangNYC.

Note: this column has been corrected to note that the Brooklyn DA office announced its policy in 2014 under then-DA Ken Thompson.