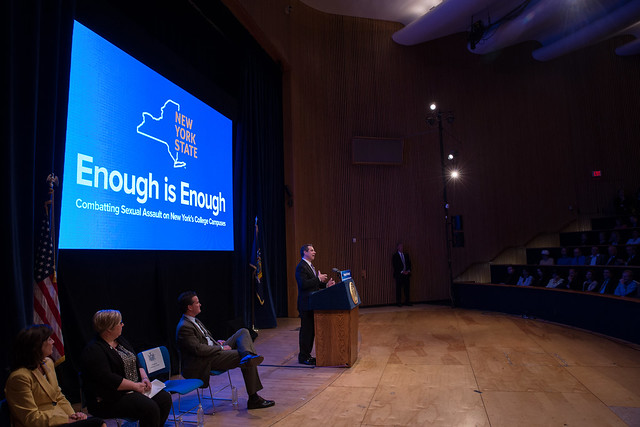 At the end of August, NBC New York ran a story about a young woman who was raped after going out to a Manhattan bar. Despite the fact that she came forward, wanting justice to be done, the Manhattan District Attorney refused to prosecute the case.

When a reporter questioned his decision not to pursue charges, DA Cyrus Vance’s staff shared a letter he wrote to Governor Andrew Cuomo insisting that he cannot bring forth rape charges in cases in which victims were voluntarily intoxicated. In other words, if you go out in Manhattan, get drunk, and end up being raped, there is nothing the Manhattan DA can do for you.

The idea that “prosecutors cannot bring sex crime charges in cases where the victim becomes voluntarily intoxicated and was unable to consent” is simply untrue. We know it’s untrue because the Manhattan DA himself brought charges in a similar case: People v. Johnson.

In that case the Manhattan DA secured a Rape 1 indictment where the victim was voluntarily intoxicated. The Appellate Court ultimately vacated the conviction, but only because DA Vance’s office botched the plea deal.

This is not the first time DA Vance has declined to press charges in a sexual assault investigation, and he’s not the only one with a follow-through problem. Time and time again, law enforcement fails survivors of sexual assault. It’s not a problem unique to DA Vance or New York City but a nationwide “epidemic of disbelief” as Atlantic writer Barbara Bradley Hagerty put it.

Survivors of rape are regularly met with skepticism. Though it’s the police who investigate and DAs who secure convictions, the state Legislature cannot be absolved of responsibility.

While the NYPD works to implement a “victim-centered” approach – a result of a scathing city Department of Investigation inquiry that found the Special Victims Division was undertrained and understaffed – the Legislature must do its part and pass the Rape is Rape bill in January, when the next legislative session begins.

And our work does not end there.

We must also elect District Attorneys who will be thoughtful in their prosecutions of sex crimes and take all rape cases seriously, not just the ones they think they can win.

It is especially important that we have DAs who understand that the Penal Code should not only be used to prosecute crimes, but to inform the public of what is acceptable behavior. When we call a rape—whether it is vaginal, oral, or anal—anything but rape, we delegitimize the crime and invalidate the survivor’s experience.

Perhaps the Me Too movement is the cultural awakening this country needs to take sexual violence seriously. That being said, these cultural changes will not happen overnight and in the meantime, we implore the NYPD, New York’s District Attorneys, and the state Legislature to do better.

Everywhere we look our institutions, designated to protect, serve, and deliver justice, are failing survivors. We must take responsibility for these failures and adopt survivor-centered policies while we work to change society.