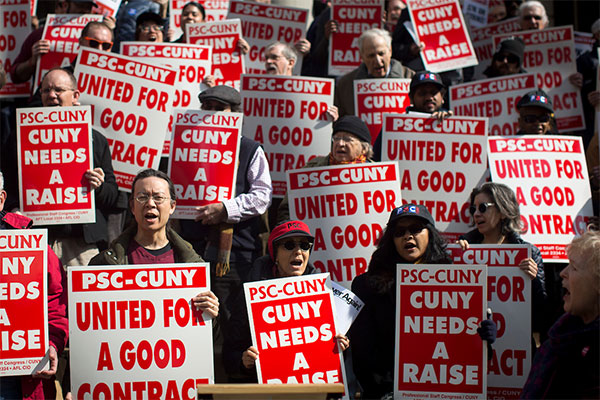 At 2 a.m. on Friday October 18, I walked out of the Manhattan headquarters of the City University of New York (CUNY) having helped to line-edit a labor contract memorandum of agreement (MOA) for the sixth time that day.

I sit on the bargaining team of the Professional Staff Congress, an American Federation of Teachers local that represents some 30,000 employees at CUNY. The bargaining unit includes adjunct and full-time faculty, professional staff, graduate employees, college laboratory technicians, and many others. More than half a million students, a majority working class and people of color, attend CUNY each year.

When I left the building, we had a deal that moved tens of millions of dollars to enhance pay for some 12,000 adjuncts, an accomplishment with national resonance for institutions of public higher education. On top of that, the tentative agreement included significant enhancements for a couple thousand graduate employees.

PSC Delegates are currently discussing the MOA, and will vote on recommending it to the membership on November 7. Assuming the contract is ratified, by Fall 2022, the bottom of the adjunct pay scale at CUNY will move from the current $3,222 per three-credit course to $5,500, for a three-credit course and a paid office hour, a 71% increase.

Adjuncts across the country have been organizing in recent years, at universities like Tufts, George Washington, and many more. They are fighting for better pay, job security, benefits, and other improvements to working conditions. Though adjuncts have long been organized at CUNY, they have faced an uphill battle as decades of austerity have been foisted on the country’s largest urban university by powerful political and financial forces. Yet this round of bargaining represents a significant reversal of the inequality between full- and part-time faculty that has characterized the work life of 12,000 CUNY adjuncts.

One piece of the raise comes from a traditional hourly increase, but the other comes from a so-called “office hour.” Adjunct faculty at CUNY are as dedicated as any to the students they teach. They have long held offices hours and met with students as much as those students need, but mostly without compensation. This new hour of pay for every course begins to recognize the many hundreds of thousands of hours of uncompensated labor that CUNY adjuncts perform every semester.

This wage increase is a moral victory. It will matter in the lives of the 12,000 adjuncts who labor at CUNY, many at the very bottom of the pay scale. But it is also a structural victory that I hope will be repeated throughout the country.

There is not a president, provost, or department chair at our university who will fail to do some basic math and realize that converting adjuncts to lecturers – CUNY’s title for college instructors who have full-time work, job security, and strong benefits, but who do not have a research obligation – will become a much more rational choice with this contract. In this sense, this outcome may mean the beginning of the end of adjunctification at CUNY.

But there is also a host of gains for graduate employees, the group that I (and many others!) have spent the past six years cohering into a political force at CUNY. When we started organizing, membership rates for Graduate Assistants – the title of many though not all graduate employees – were at just 22%. Today, the chapter is vibrant, and membership has increased three-fold. The gains from this round did not come from magic, but rather from the power that comes from dozens and then hundreds and then thousands engaging in union activity.

Starting next semester, those employed at CUNY in their sixth and seventh years of doctoral study will no longer pay tuition if they are New York residents, and will have their tuition reduced by some $2,700 annually if they are not. Gone are the days of getting tagged for exorbitant fees, just as we are trying to finish our dissertations!

The outcome that I am most proud of, though, is the huge step we have made toward eliminating an entire tier of doctoral students – so-called “tuition-only fellows,” who lack stable funding and access to health insurance. CUNY has committed the money to provide health insurance for this entire group, and we will work with the Graduate Center to construct an employment system that will allow them consistent access to these funds. This will require some work – and organizing – in committee, but when we are done, this highly exploited class of graduate sometimes-employees will be eliminated.

There is yet another way to understand the combination of graduate employee and adjunct demands the tentative agreement represents: at the end of this contract, doctoral students who have a standard five-year funding package (which includes a stipend) and who adjunct for their full workload will bring in approximately $50,000 annually.

On the one hand, I do not want to overstate this. As many know, living in New York on even this much money is not easy, and the full workload is a lot. But I don’t want to understate it either. This amount of money enables those from working class backgrounds to obtain a PhD without accruing debt. It is a substantial improvement over current conditions, and we achieved it even while making a huge step toward eliminating altogether the bottom tier of graduate employees.

Union contracts are, in the end, a measure of power. The many good, even transformative, gains in the proposed PSC-CUNY contract are a precise reflection of the power that we have built as members and as an organization. But we did not win everything. Adjunct faculty deserve yet higher wages; we have more work to do to drive home the win for tuition-only doctoral fellows; and a more fundamental political project remains substantially unaddressed: will the city and state directly and fully fund CUNY the way it was when the working class of New York was whiter than it is today?

This is of course a fight – a political project – that extends well beyond CUNY. Institutions of public higher education are under attack everywhere. Our local fights are fundamentally national ones.

Members of the PSC have a lot to be excited about in this proposed new contract. Many of us are taking a moment to celebrate. But tomorrow – later tonight, even – the work continues.

***
Luke Elliott-Negri is a non-teaching adjunct at the School of Labor and Urban Studies and a doctoral candidate at the CUNY Graduate Center, where he is the PSC chapter chair. He serves on the PSC Bargaining Committee, the PSC Pension Committee, and the Working Families Party State Committee.

Note: this column has been updated to clarify information around covered doctoral students.