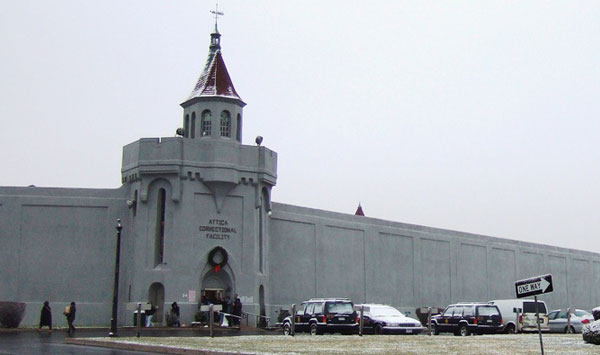 As the heated debate over the movement to close the Rikers Island jail complex rages on despite or because of the New York City Council’s vote to build four new jails and close Rikers by 2026, where is the corresponding clarion call to close Attica, Auburn, Clinton Dannemora, or any number of New York State’s brutal and archaic prisons?

In 2017, when Mayor de Blasio and the Lippman Commission released reports laying out proposals to close Rikers, there were about 10,000 people in New York City jails.  The mayor said that reducing the jail population to under 5,000 was a precondition to shuttering Rikers. Today, there are about 7,000 people held in city jails. The proposal approved by the City Council projects a city jail population of 3,300 by 2026. As the number of people held in cages at Rikers continues to fall, where is the equivalent pressure and effort to reduce the New York State prison population from its present 46,000?

Several rationales were used to support the movement to close Rikers. Most of those same justifications apply with even greater force to New York’s patchwork of 52 state prisons that hold almost seven times the number of people at Rikers.

Close Rikers advocates pointed out that the Rikers jails, which first opened in 1935, were decrepit and dangerous. Rikers is young in comparison to several of New York’s notorious state prisons like Auburn (1818) or Clinton Dannemora (1845). Even Attica (1931) predates Rikers.  These antiquated and dilapidated state institutions struggle to provide heat in the winter and to cool down in the summer. One can easily imagine the layers of asbestos and other environmental hazards that afflict everyone inside.

Stories of the prevalent brutality at Rikers are legion as it earned labels like Torture Island and Gladiator School, but there is also abundant evidence of violence and corruption in New York’s state prisons, including homicides at the hands of prison guards. The frequency of brutality compelled the United States Attorney’s office to charge five corrections officers with civil rights violations, with then-United States Attorney Preet Bharara declaring that “excessive use of force in prisons...has reached crisis proportions in New York State.”

The racial disparities at Rikers Island are reflected as well in the state prisons as black and Latino people make up 73% of the prison population, nearly double their numbers in the general population. The undeniable link from slavery to incarceration is nowhere more evident than in prisons in northern and western New York, where an almost exclusively black and brown prison population is overseen by an enclave of almost exclusively white correction officers as the local prison is the primary source of employment.

Visits to Rikers Island are notoriously exhausting and humiliating, but visits to state prisons add another layer of torment – many are hidden in remote corners of the state, some near Canada, even though most state prisoners are from New York City. Visits are necessarily infrequent, and families are decimated.

Vast financial resources are poured into city and state corrections budgets. The fiscal 2020 preliminary budget for the New York City Department of Correction was $1.4 billion. The state prison budget is seemingly ever expanding. From 1999-2015, the budget grew to almost $3 billion even as the number of incarcerated people dropped. Estimated spending for the New York State Department of Corrections and Community Supervision for 2019-20 is $3,248,250.

The average stay on Rikers is 61 days. People are harmed physically, emotionally, spiritually, and in other concrete ways such as lost jobs, housing, etc. The average minimum stay in New York state prison is more than 10 years. The devastation caused is incalculable.

The initial call to close Rikers focused on the brutality of life at Rikers. That long overdue recognition led to revelations about who was held inside. The Close Rikers movement gathered steam when it became common knowledge that most people held at Rikers -- upwards of 70% -- are pretrial detainees, people not convicted and presumed innocent. That realization was coupled with the awareness that countless of those pretrial detainees were in jail simply because they couldn’t afford to post bail, often in amounts under $2,500.

In short order, the close Rikers refrain was coupled with statements from advocates and elected officials alike that freedom should not depend on the size of your bank account. Soon added to the mix was the awareness that many people were on Rikers for minor parole violations such as missing curfew or being late for appointments with a parole officer. Now the movement was less about closing an old, vicious jail, and more about getting people out of jail altogether.

So why hasn’t the movement to close Rikers carried over to New York’s state prisons? Most likely, it has to do with perceptions of who is held in city jails versus state prisons. State prisoners are not incarcerated because they are too poor to post bail or because of technical parole violations. For the most part, they are serving sentences after having been convicted of violent crime. Yet an examination of who is being held inside state prisons should lead to the same result as with Rikers – the prison population can, should, and must be dramatically reduced.

New York State is notoriously punitive, as prosecutors have routinely asked for maximum sentences and judges have been happy to oblige. According to the Sentencing Project, New York is one of eight states where the proportion of prisoners serving life or “virtual life” (50 years or more) sentences is at least one in five. Almost 10,000 people in New York prisons are serving life sentences or its functional equivalent, a number topped only in Texas, Louisiana, Florida, and California.

As a result, New York State prisons are filled with a rapidly aging population even as studies reveal that people “age out” of criminal activity. There are more than 10,000 people over the age of 50 inside state prison. Almost 3,000 are over 60. According to the Department of Corrections and Community Supervision, the average age of death of those who died from natural causes inside New York state prison was 57. The vast number of people who are largely condemned to die in prison is unjustifiable and barbaric.

Thousands of New York prisoners have served their time, often several decades, remarkably.  There are countless stories of transformation, redemption, and profound change. Yet these men and women languish in prison for no reason other than to satisfy a seemingly unquenchable thirst for interminable punishment.

New York can in several ways decarcerate its state prisons, with no threat to public safety and with an enormous gain in talent and contributions to society. The notoriously unforgiving parole system must be overhauled. Parole Board members must be people steeped in clinical and therapeutic services who recognize and value the capacity for rehabilitation.

Passage of the Fair and Timely Parole Bill (S497A) can transform the process by dictating a forward-looking approach that examines evidence-based risk assessment scores and the individual’s institutional record, as opposed to looking backward and focusing exclusively on the crime of conviction, a factor the individual can never change.

The discretionary power to grant clemency is enshrined in the New York State constitution that vests the Governor with the power “to grant reprieves, commutations and pardons after convictions, for all offenses except treason and cases of impeachment, upon such conditions and with such restrictions and limitations, as he may think proper.” To date, Governor Cuomo has commuted the sentences of only 18 people. Thousands of meritorious clemency applications are pending. The governor, with the stroke of a pen, could send those men and women home.

The punitive sentences of the past 40 years must be corrected. The American Law Institute (ALI) sought to address the decades of punitiveness that led to the current state of mass incarceration, made more shameful by the racial disparities in American jails and prisons. ALI now calls for state legislatures to enact “second look” mechanisms that reexamine a person’s sentence after fifteen years no matter the crime of conviction or how long the original sentence.

In similar fashion, the Elder Parole Bill (S2144) that gathered momentum in last year’s legislative session in Albany provides that anyone who is over 55 years old and has served at least 15 years would have the opportunity to appear before the Parole Board.

Brooklyn District Attorney Eric Gonzalez is advocating for legislation that would permit resentencing where prosecutors deem it appropriate in the interests of justice after a person has served 20 years for the most serious crimes. There are similar calls for prosecutors to establish sentencing review units to reevaluate the cases of all people serving lengthy prison terms.

The Supreme Court now recognizes the mitigating qualities of youth and, relying on growing scientific awareness of adolescent brain development, concluded that youth are less culpable than adults and have greater capacity for rehabilitation. As a result, judges must now consider youth and its attendant traits before sentencing young people to die in prison. There are nearly 1,200 people in New York State prison serving life sentences for acts committed when they were teenagers. Each of those cases now demands reconsideration.

Important questions remain since the City Council’s vote to close the Rikers jails, but there is one thing on which everyone should agree -- the movement to get people out of jail and close Rikers Island should be applied with equal force to New York’s state prisons.