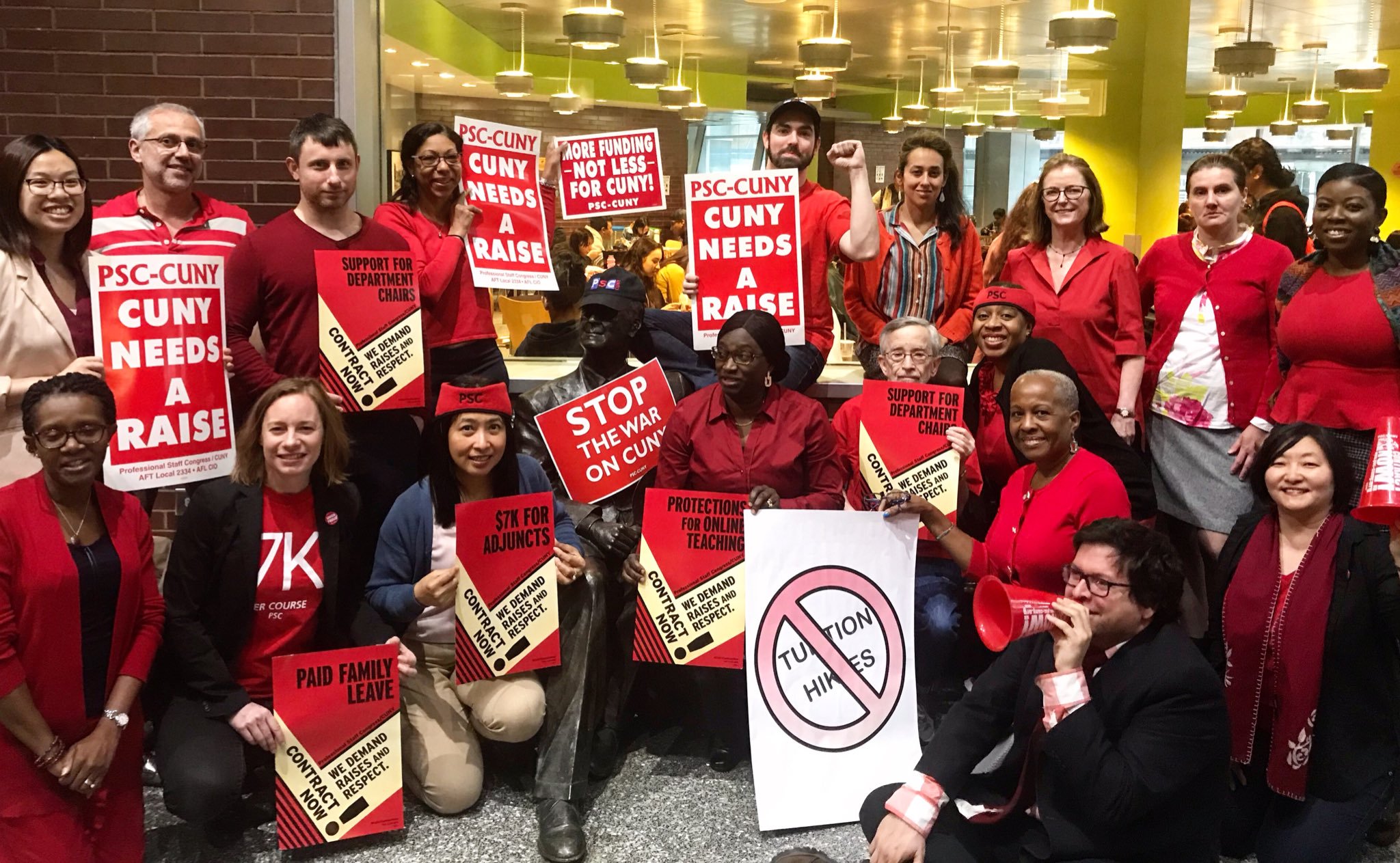 PSC CUNY rally, with the author center back (photo: @PeteHarrisonNYC)

After over two years of negotiations, the Professional Staff Congress of the City University of New York (PSC-CUNY) and the university have reached a tentative deal on a new contract for the 30,000 faculty, adjuncts, librarians, and professional staff in our union.

The leadership of PSC-CUNY has hailed the contract as a historic deal and part of a larger stand against austerity. In particular, they sight the pay gains for adjuncts, which will increase by 71% by 2022.

As an adjunct lecturer at Baruch College, I would stand to gain from these increases, so even though I was skeptical of the contract campaign (and have participated in #7korstrike actions), I was open-minded and eager to hear my colleagues out. It’s tough to take a position against a pay raise because of my own financial insecurity. I also think the agreement secures legitimate gains. I have no doubt that they weren’t easy to get and that the executive committee worked extremely hard, creatively, and thoroughly.

But as I listened to the (at times heated) debate last Thursday night at the Delegate Assembly, I made up my mind to vote “no” on the contract.

My decision is based less on the technical merits of the contract (here’s analysis for and against) and more about the process that got us here and what it says about union power in New York City today. To me it says that it is time for generational change in union leadership.

People that I respect at the meeting and on other occasions say that our leadership has been fighting austiery and leading strikes against it in education for over 20 years; that this contract campaign is part of a longer-term strategy to defeat it. That tax cuts to billionaires makes it hard to fight.

I agree. Our leadership has been fighting for a very long time under ever tighter budgets and tougher political climates. No contract negotiation is going to result in 100% of our demands. Billionaires are making it really hard to fight back.

But the strategy simply isn’t working. Just in my case, the gains adjuncts will see fall short of our goal of $7,000 per course, which is still short of a livable wage in New York City. The overall increases for everyone won’t keep up with inflation. And it is clear that some of the new money will come from higher tuition and fewer courses for students.

To the union leadership’s credit, they acknowledge the shortfalls and vow to fight on for more in the next contract. I believe them. But it is clear that so many years of fighting against corporate power has diminished the sense of what is possible for many of our leaders. For all the rhetoric of standing against austerity, they have accepted it in practice. What’s more, they’ve done so at a time of immense opportunity for organizing in education.

Just as teachers across the country are striking and winning improvements, the leadership didn’t support a strike authorization (someone even dismissed the success of the Chicago teachers strike compared to this contract campaign). Just as a new level of energy and base-building has emerged among staff and students, the leadership claims that the membership isn’t motivated enough for mass action. Just as the left in America is finding new confidence, allies, and roads to power, PSC leadership has seemingly worked to protect establishment relationships.

I deeply value the years of experience our leadership has in this fight and the knowledge they have about the contract process. There’s no question that they know more than I do about how things work.

But I, and many members and students know that “how things work” isn’t working. The strategy to make change isn’t working. We live it everyday with higher rents, longer commutes, more work, and lower wages.

Just as importantly, I and many others believe that there are better strategies to make things work. We don’t have the time to wait around for incrementalism. We need to elevate new leaders in these spaces to carry on the fight for the future.

Fighting austerity will take mass mobilization of the working class, and not just in education or the public sector. It means building solidarity with gig economy contractors, service industry workers, and tech workers, among others. It means supporting fights for undocumented workers, sex workers, and the victims of mass incarcertaion who sit in jails or can’t find work. All of the pieces are in place and all of the parts are moving. Educators should lead the way.

Voting “no” on this contract and voting instead for a strike authorization should be the spark that unites a general strike against austerity and the billionaire class that thinks they beat another generation of workers. They are wrong.