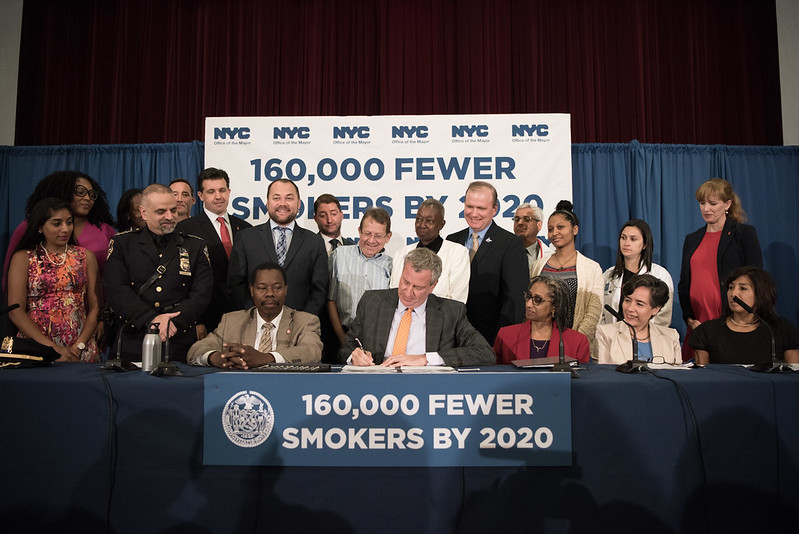 The New York City Council recently voted to ban flavored e-cigarettes. Mayor Bill de Blasio will reportedly either sign the bill or let it pass into law. The City Council also considered a bill banning menthol-flavored traditional cigarettes but did not vote on the measure.

Still, energized by their legislative victory, anti-smoking activists continue to push for the menthol ban. Yet by banning all of these products, policymakers would both remove a legal alternative to menthol cigarettes and increase the likelihood of significant black market activity.

To be sure, smoking is terrible for you and has claimed an astounding number of lives. The motivation behind the ban proposals is thus both noble and understandable. But ban advocates have committed a fundamental error in reasoning: They assume that a ban will magically end all sales of menthols and flavored e-cigarettes. However, both economic reasoning and history suggest that bans often shift sales to an illicit market.

The reality is that people with strong consumer preferences tend to seek out certain products regardless of their legal status. And plenty of research shows that menthol smokers don’t find other cigarettes to be substitutable alternatives. Worse still, areas attempting to ban menthols — usually larger urban hubs — tend to have strong pre-existing infrastructure for illicit cigarette markets. In fact, New York is the “smuggled cigarettes capital” of the country. This suggests that if a menthol ban were imposed, a black market in menthols would spring up quickly and be difficult to eradicate.

Ban proponents respond by pointing to a survey in which 40 percent of menthol smokers indicated they would try to quit if a ban were instituted. But a study from a menthol ban in Ontario showed that while just under 30 percent attempted to quit in response to the ban, only 7 percent were successful.

The good news is that smoking rates have been trending downward for decades. And with the rising popularity of e-cigarettes, this trend could continue. Vaping products like e-cigarettes often serve as an alternative for menthol smokers looking to quit combustibles (traditional cigarettes that are burnt and smoked, not vaped). This is good for public health: Evidence suggests that these products are safer than combustible cigarettes.

Unfortunately, menthol ban advocates like those in New York often push just as strongly for bans on flavored vape products as they do for menthol bans. But in prohibiting the sale of both menthol cigarettes and flavored vaping or e-cigarette products, policymakers remove a healthier, legal alternative for menthol smokers looking to quit and thereby increase in the likelihood they will turn to the black market to obtain menthols.

Of course, there are no close substitutes for e-cigarettes either, so those consumers will likely choose illicit products as well. In a twist of tragic irony, the vaping black market is actually what has led to the recent outbreak of lung illnesses — not flavored products or even vaping itself. Former Food and Drug Administration head Scott Gottlieb acknowledged this fact when he said, “It appears that many of these acute lung injuries are being driven by illegal products that have oils in them.”

Illicit markets do more than just endanger consumers; their revenues often end up in the accounts of criminal syndicates and gangs. And to the extent any ban is effective, it will require police to stamp out illegal transactions. This puts both law enforcement and the communities they protect in tense situations, which tends to increase levels of mistrust. And neither group nor the larger society is served by a thriving black market.

Bans on vaping products and menthol cigarettes will not make communities safer. Rather than saving people from themselves, budding black markets could instead expose them to other harmful substances. Even as Governor Cuomo lists instituting and enforcing these bans as part of his 2020 agenda and as the New York City Council considers further  prohibition, both the governor and the city’s leaders should acknowledge the possibility that waving a legislative wand does not make smoking disappear. Instead, by banning both products, they would be inviting a black market that endangers smokers, vapers, the police and the communities they protect.