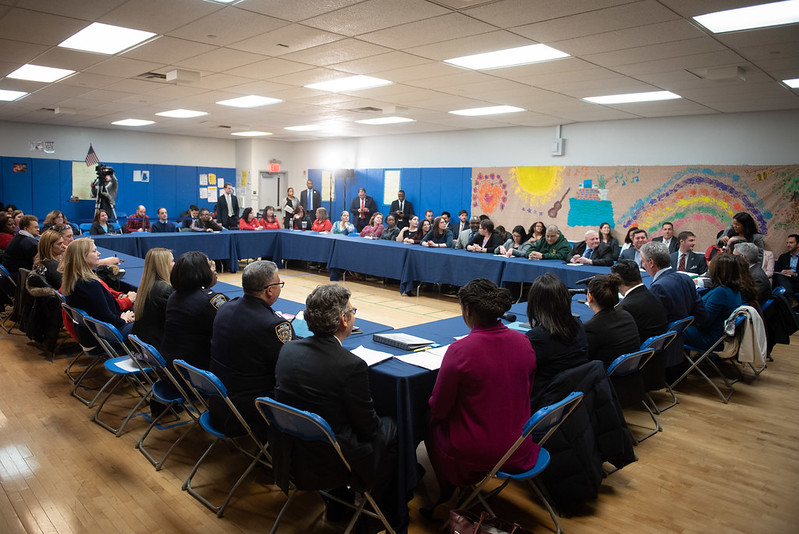 How can neighborhoods defend themselves against displacement, gentrification, and disempowerment in an age of corporate domination? How can communities fend off rezoning, upzoning, and the usurping of neighborhood identity? Most people agree that Community Benefits Agreements (CBAs) don’t work for communities facing dislocation. Historically, these agreements have been tools used by developers to attenuate neighborhood opposition to mega-projects like stadiums, shopping malls, and corporate hubs. Though they come in different forms – jobs, contributions to community nonprofits, free tickets – CBAs are all the same. They are handouts used to cool community opposition to a developer’s project.

For decades, community groups, community boards, and public advocates have been victimized by the CBA strategy. These agreements force community leaders to jockey for ‘their’ benefits and to ignore the development of the community as a whole. But, the CBA model is ill-fitted to the contemporary development landscape of impact investors, opportunity zones, and a renewed sense of community empowerment. CBAs are unenforceable by the community, and to the developer, they are nothing more than the cost of doing business.

I am proposing a new model for communities facing off with developers: the Neighborhood Equity Ownership Plan (NEOP), modeled on the employee stock ownership plans in the private sector where one out of every five workers owns stock or stock options in the business.

This new strategy can help communities compete with a developer’s hired guns -- lobbyists, public relations professionals, and community liaisons. As lobbyists strive for zoning variances, publicists attempt to create a development narrative and as liaisons try to co-opt indigenous leaders, neighbors can promote partnership and avoid being derided as NIMBYs.

The logic is simple. Developers want control and a return on their investment that is economically viable. But they need government and community partners. For developers, the government provides necessary infrastructure investments, regulatory oversight, permits, and zoning variances. For these expenditures it is entitled to an ownership slice. The host neighborhood will absorb the impact of construction marked by truck traffic, noise and air pollution. Residents and employees will suffer from the loss of public space. Businesses will likely experience a decline in foot traffic. Nonprofits will confront increased social disruption. Stock ownership will serve as a repayment for these and other disruptions to daily life.

Neighborhood equity options would be divided among residents, employees, business owners, property owners, and nonprofits. Here the distributions would allocate 5 percent of the stock to each shareholder category. Residents and employees would be entitled to purchase shares of the corporation based on the longevity of their ‘investment’ in the neighborhood. People who have lived or worked in the community for 20 years or more, for example, would be entitled to purchase twice as many shares as those who have ten years invested in the district. Business and property owners would receive shares according to their annual revenues or assessed value. And, finally, nonprofits would be ‘gifted’ 5 percent of the shares of the corporation based on the number of students, seniors, or clients served.

The proposal for a soccer stadium in the Bronx provides a great example of the benefits that could be derived for the community from a neighborhood ownership plan.

A River Avenue Stadium Corporation would be created with equity shares available as indicated above. When naming rights are sold, when broadcast fees are collected, when merchandising agreements are made, or when sponsorships and suites are sold, revenue would pour into the corporation and be distributed as dividends accordingly.

As it stands currently, the benefits of these revenue streams would bypass those most impacted by a home for a private corporation owned by the world's third wealthiest person, China, the Yankees, and Silver Lake Management, a private equity firm.

More than 30 million Americans already own part of their employer company through stock or stock options. They derive dividends, vote for directors, and profit from the business’ success. This formula, if applied to a changing neighborhood, could reinvigorate corporate-community relations. It could refocus developers towards a more expansive definition of profit. It would convert stakeholders to shareholders. With the government and the neighborhood as shareholders, the needs of the community can be safeguarded.

***
Dr. Cary Goodman holds a post-doctoral certificate in development from The United Nations and is the executive director of the 161st Street BID.