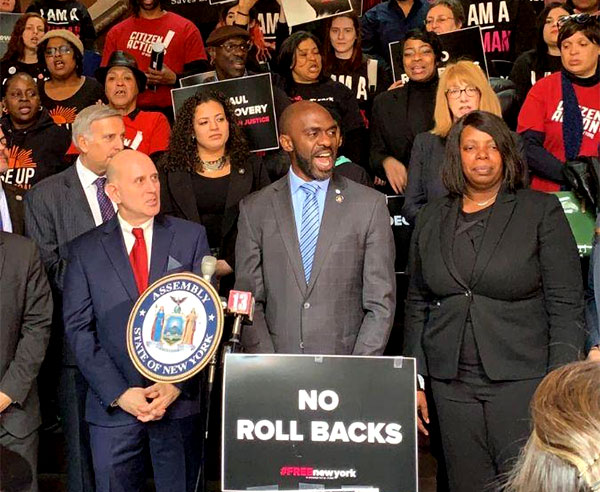 Assemblymember Blake, one of the authors, at a recent rally

On January 1, as New York took a considerable step towards a more just and equitable criminal justice system, we heard the all-too-predictable objections to bail reform. Now, along with the chorus that tried to shout down reforms in the last legislative session, we hear some of those who supported these reforms wanting to undo a policy that takes seriously the rights of low-income New Yorkers and communities of color—because of a tragic incident in Monsey that has nothing to do with bail or reform.

As a black state legislator who represents Latino, African, African-American, and white residents in a Bronx district whose citizens have long borne the brunt of inequitable and unjust bail policies, and as a Jewish nonprofit leader whose organization is headquartered in the same district and has worked in jails and prisons for decades, we are appalled that the bitter pain of racism and a resurgence of anti-Semitism are being used to divide us rather than bring us together.

Let’s look at the facts. The purpose of money bail is to ensure that defendants—people who are only accused of a crime and thus are legally presumed innocent—will appear in court. It is not meant to be a punishment or a fee. Yet for many people, it represents an insurmountable financial barrier to release that carries dire and life-altering consequences. We have many examples of individuals like Kalief Browder and thousands of others who were arrested and held not because they were a flight risk, but simply because they or their families could not afford bail. Kalief experienced such violence and torture while detained that he took his own life after release. Layleen Polanco never made it home and died while detained on $500 bail.

We cannot ignore the historic and systemic racism, sexism, and ageism at the root of many criminal justice policies, nor can we pretend that bail does not criminalize poverty and perpetuate injustice, and we must recognize that pretrial detention actually diminishes public safety.

How could this be? After just a few days of detention, people may lose their jobs, miss rent payments, or have their children taken away. After a month, these consequences become even more pronounced and threaten community ties that are crucial to stability and wellbeing. To make matters worse, people who are detained awaiting trial are far more likely to accept plea agreements, even when innocent, because they want to go home — see the exonerated Central Park Five — or be convicted of a crime than similar defendants who are not subjected to conditions that damage their wellbeing.

Contrary to the rhetoric of many critics, our reformed bail law does not encourage prosecutors or judges to let “dangerous people walk free.” New York has never permitted preventive detention based on a prediction of future “dangerousness.” Prosecutors and judges have long worked within a system that asked them to consider only whether a person was likely to return to court and provides many options to support people in returning to court that do not depend on financial capacity.

The truth is that most of the benefits of cash bail went to private insurance companies in the bail bond business, and that we are terrible at predicting future behavior. We should not allow the present fear-mongering to create more punitive and harmful bail and detention policies than those we reformed during the last legislative session in Albany.

We stand together for bail reform and all policies that address the underlying inequities and biases in our legal system. It is time to give bail reform a fair chance and not allow this thoughtfully-constructed law to be undone under the pretense of fighting anti-Semitism.

Yes, there is more to do. We must continue to implement programs that increase public safety while addressing inequity. New York City has been working to ensure that people who are released from court or jail are offered needed social services, an approach that should be supported by those who claim to be so concerned about releasing people who were previously being held for ransom they could not pay.

We look forward to a productive and progressive 2020 legislative session that builds on last session’s reforms and continues to shift New York towards a more just and equitable legal system.

***
Assemblymember Michael Blake represents the 79th District in the Bronx. Elizabeth Gaynes is President and CEO of The Osborne Association. On Twitter @MrMikeBlake & @OsborneNY.