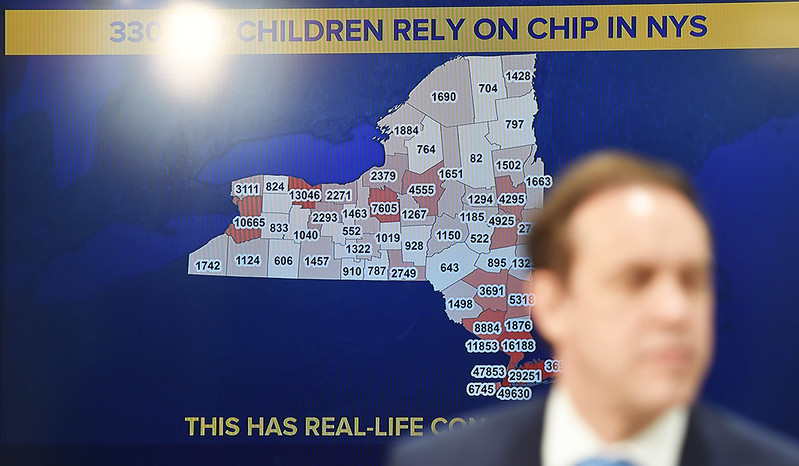 With Medicaid being blamed for the roughly $6 billion deficit our state is facing, most politicians see only two possible solutions: raise taxes or cut services.

Yet a far better third option exists: get rid of the for-profit insurers getting rich off our tax dollars, and recoup those funds for actual patient services.

Payments to private insurers are the silent bloat in New York's Medicaid budget, driving up our cost more than any other state in the nation.

Medicaid is a federal program that provides health insurance to people who can’t afford it. In New York, that’s one-third of us -- one out of every three neighbors, children, workers, seniors, and taxpayers.

Federal funds from taxpayers pay half and in most places across the country, the state pays the other half. But here in New York, Albany sends part of the bill to county taxpayers, to raise through regressive property taxes.

The feds let each state decide how to deliver Medicaid. And while there’s a big debate over single-payer universal healthcare (which I support), ignored in that debate is that Medicaid itself is not single-payer in New York.

Instead, we send our tax dollars to for-profit “Managed Care Organizations” (MCOs), like United Healthcare and WellCare.

The point of being in business is to make a profit, but the purpose of a taxpayer-funded program like Medicaid is supposed to be health care. Instead of blaming corporations for making a profit, I blame a government system that hands it over without question.

To top it off, these payments aren’t efficient. New York spends more per enrollee than 42 other states. When we hear that, some might think that means patients in New York get more out of Medicaid than patients in other states. But that’s not true.

Of the 38 states that use MCOs for Medicaid, New York is among the most expensive. In other words, not only is New York paying for-profit corporations with Medicaid funds, we are paying those corporations more than most states. New York State Comptroller Tom DiNapoli’s audit of our Medicaid budget just found almost $800 million in fat that can be trimmed off tax dollars funneled through Medicaid to Big Insurance and Big Pharma. With a projected 2020 state budget deficit of around $6 billion, that’s a good start - but as long as profit is the motive, costs will always go up.

The current system is bolstered by the steady stream of campaign contributions by those same private insurers to Albany politicians. In 2018, UnitedHealthcare PAC donated $40,000 to Democratic Governor Andrew Cuomo and $44,000 to the Republican Senate Campaign Committee. That’s just the tip of the iceberg.

Usually, politicians in Albany keep us bickering among ourselves about whether to raise taxes or cut services, while they soak up these campaign contributions from Big Insurance.