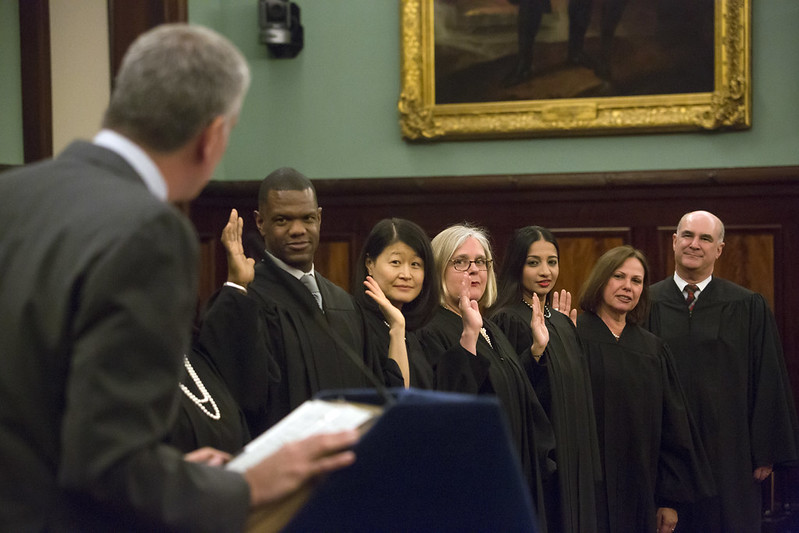 As law enforcement and elected officials scream for a do-over regarding bail reform, they urge that judges should be given the discretion to remand people they believe to be dangerous. NYPD Commissioner Dermot Shea in a New York Times op-ed wrote, “We can trust New York State’s judges to use this discretion wisely and only for individuals who pose a real threat to the public or who continuously flout the justice system.” Shea’s boss, New York City Mayor Bill de Blasio, has been calling for giving judges discretion to decide a person’s dangerousness for years.

But the call for judicial discretion as a solution in search of a problem reveals that proponents are either ill-informed, naïve, or simply intent on returning to the racist and biased previous approach to bail.

By now, even those who argue for reforming bail reform agree that the system that had been in place for decades unconstitutionally and immorally punished people based on wealth. Governor Andrew Cuomo, as he signals a willingness to re-evaluate bail reforms, has said that “the system we had was discriminatory and biased.” That “system” was actually made up of individual judges.

Prior to January 1, 2020, it was common practice for judges of New York’s Criminal Courts to set bail that people without bank accounts couldn’t make. Stories are legion of people, almost exclusively people of color, held pretrial on Rikers Island, often on minor charges, because they lacked $500 or $1,000 to pay their way to freedom.

Judges were not required to set that bail. There was no law that mandated that kind of bail. Judges chose to do it.

In fact, 50 years ago the New York State Legislature reformed the bail laws to allow for other, less restrictive, forms of bail than cold hard cash. Alternative forms of bail like unsecured bonds that do not require any upfront cash payment have been on the books since 1970, but judges have steadfastly refused to utilize these statutorily authorized mechanisms despite repeated trainings, encouragement, and pleading.

Instead, in the exercise of their discretion, judges have chosen to incarcerate people based on wealth by using the harshest option available -- cash or insurance company bail bond – as a way of incarcerating poor people of color who are, after all, supposed to be presumed innocent. It is precisely this exercise of judicial discretion that had to be legislated out of existence.

While some law enforcement and elected officials warn of a bail reform apocalypse, it is critical to note that the judiciary, too, is clinging to the idea that money bail is sacrosanct. The revelations about the millions of people sent to Rikers Island because they couldn’t afford to pay their way to freedom are beyond dispute. There are countless stories of lost jobs, missed school, violence, and untold impact on physical and emotional well-being. Yet while there hasn’t even been any kind of publicly stated judicial remorse, let alone any mea culpas over the damage they inflicted, there are judges who bemoan bail reform and are trying desperately to return to the ways of the past.

Two judges, one from Nassau County and one from Albany County, chose to exercise their discretion by intentionally flouting the new law and setting cash bail that is now expressly forbidden by statute.

So, pardon those who cringe and rebel at the notion that bail reform needs a judicial discretion fix. If such a change is made and past is prologue, there will be an awful lot of people of color in pretrial detention after having been deemed to be “dangerous.” As the saying goes, fool me once, shame on thee; fool me twice, shame on me.