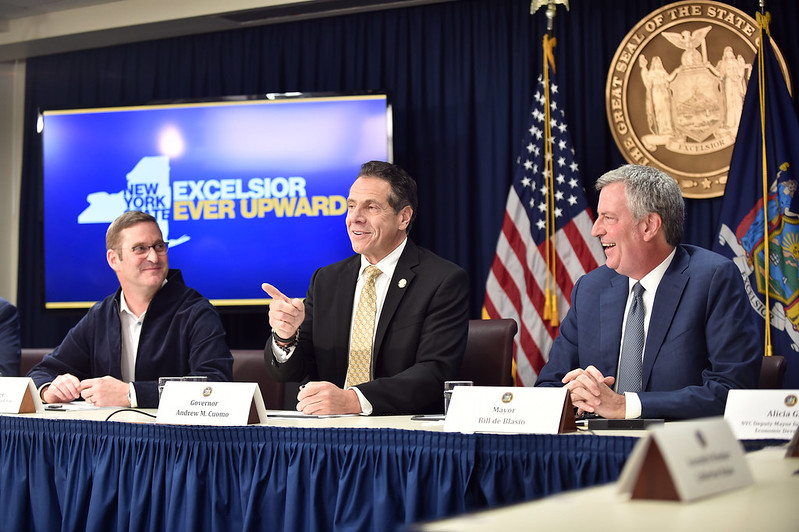 This week marks the one-year anniversary of the cancellation of the Amazon ‘HQ2’ Queens deal, which presents an opportunity for New Yorkers to reflect. That these types of destructive corporate welfare deals are still possible and that Amazon is still coming to New York City, albeit in a smaller footprint with fewer public subsidies involved, shows there is a lot still to be discussed around what - and who - our government prioritizes.

With the quick success last year of community groups, unions, and local elected officials assembled to fight the deal, opponents didn’t get the chance to make the bigger argument against the failed economic development ideas ‘HQ2’ represents.

The ‘HQ2’ deal was bad for New York City. Amazon dangled the promise of 25,000 jobs -- without committing to it -- in order to get what it wanted, which was public land quickly, cheaply, and with minimal public oversight. Why would our elected officials give well over $3 billion in subsidies and land to one of the largest, most profitable corporations on earth for an office they were already going to build and could easily afford, without requiring Amazon to make tangible commitments to the public good?

Simply by asking this question, opponents were labeled as naive anti-development radicals. Nevermind that we are backed by 40 years of research linking runaway economic and social inequality in America to neoliberal policies that shower public wealth on corporations, fail to deliver promised public benefits, and take money away from investing in public services. Economists across the political spectrum from the American Prospect to the Cato Institute all oppose corporate welfare.

However, the establishment’s consensus on economic development limited the ‘HQ2’ debate to the terms of the deal after the fact, not whether the deal should be made in the first place. Many Democratic officials still lazily point to decontextualized polls that claim to show that ‘HQ2’ was “popular” as though they came close to explaining its consequences.

This mindset has been disastrous for our city. While HQ2 failed, Atlantic Yards, Hudson Yards (where Amazon is heading), and even Ground Zero have all followed the same neoliberal model -- give away public wealth to private profiteers in exchange for vanishingly small public benefits.

As glass towers, a new sports stadium, or a mall disguised as a transit hub rise around our city, critical public institutions like NYCHA, CUNY, and the MTA crumble. Yet the media largely gives cover to the establishment by treating these as separate universes divorced from the interconnected decisions that they make about where to invest our public wealth.

No one in our political establishment is called “radical” for giving billions of dollars of public money and land to developers, corporations, and billionaires while over 90,000 New Yorkers are unhoused. No one is called “naive” for still arguing, despite all empirical data, that subsidizing luxury development will trickle down. No one has paid a political price for when these expected public benefits don’t materialize.

Opponents of the Amazon ‘HQ2’ deal were also falsely accused of not having an alternative vision for growth. The real issue is what value “growth” has in the late capitalism era of rising income inequality, racial injustice, and climate disaster. Given these challenges, we must rethink our economic priorities. If the 2010s can be summed up as “move fast and break things” the 2020s should be “slow down and fix things.” The practical solution is obvious: public investment in public infrastructure.

We’ve done this successfully in the past. Look no further than Amazon’s decision to open an office in New York City without public assistance. It wasn’t attracted to New York City because of tax incentives (though it will benefit from the incentives Hudson Yards received). It was attracted because of generations of public investment -- the city’s density, lubricated by public transportation; its workforce, nurtured by public education and housing; and its amenities, grounded around public parks, libraries, and the arts. These upfront investments created the shared public wealth that attracts individual ambition and innovation.

Instead of investing our wealth in growing these public institutions, the political establishment has been co-opted by big developers, corporate monopolies, and extremist billionaires that funnel it out of our city into offshore bank accounts. Instead of fighting against economic inequality, racial injustice, and climate disaster, this system fuels all three. We can no longer tolerate this.

Amazon has exploited this system skillfully and ruthlessly, which is why many of us still protest its presence in our city a year later. I’m running for Congress -- to represent the district Amazon ‘HQ2’ was going to call home until we stopped it -- because we have the chance to hold this failed system up to public scrutiny and to hold our elected leaders responsible for giving away our public wealth for nothing. We might not be able to kick Amazon out of New York City altogether, but we can rid ourselves of this system along with the establishment that defends it, and replace it with one that works for every New Yorker.