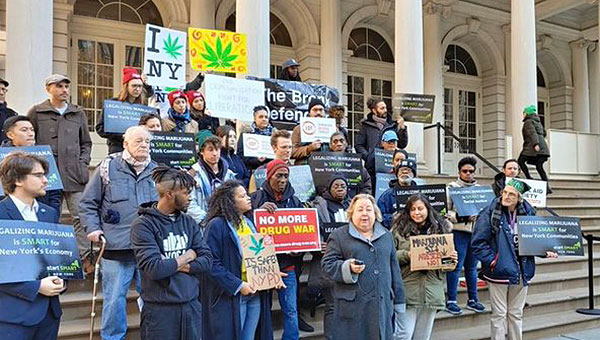 Rally to call for legalization of adult marijuana use (photo: @equityorg)

Governor Cuomo's rollout of a reworked Cannabis Regulation and Taxation Act means this may finally be the year New Yorkers get access to legal weed. And while a similar legalization push floundered in the statehouse last year, many are optimistic about its odds during the 2020 legislative session. Not only are the vast majority of New Yorkers in favor of adult-use sales, but legislators staring down the barrel of a $6 billion budget hole will be hard-pressed to turn down an estimated $300 million in annual tax revenue.

As for the New York lawmakers who haven't yet succumbed to the siren song of legal marijuana? Their colleagues may soon force their hand. Massachusetts currently allows for adult-use sales — and Connecticut, Rhode Island, and New Jersey are all aggressively eyeing legalization. Cuomo has even helped convene neighboring leaders to coordinate a regional approach to the effort. If the other states' proposals pass, New York will be forced to choose whether to follow their lead or risk watching those potential tax dollars pad the budgets of neighboring states — plenty of New Yorkers are already heading to Massachusetts to get legal cannabis.

Still, legalization is far from a done deal. Like last year, we're sure to see a showdown between Cuomo and the Legislature when it comes to the issue of 'social equity.' Many Democractic lawmakers want a guarantee that a percentage of New York's cannabis tax revenues will help fund programs and policies that serve the communities hit hardest by decades of marijuana arrests. Cuomo would prefer to put the money in the state's general fund, where he can distribute it as he sees fit.

As recent news reminds us, the past half-century of cannabis criminalization has had devastating consequences in low-income communities of color, in New York City and others around the state. And while legal marijuana may be minting a new class of cannabis industry millionaires, the spoils of the "Green Rush" are almost exclusively flowing to a small group of wealthy, well-connected, and disproportionately white players. This is unacceptable in any industry, but it's particularly infuriating given the fact the low-income, rural, and/or minority communities being shut out of the sector are the same people who've borne the brunt of our prohibitionist policies in the first place.

So yes, I agree with many of the Legislature's leaders — it's only right we use some of this revenue to repair the harms of the War on Drugs. That said, if the Legislature doesn't act more strategically, we'll end up wasting this unique opportunity to create a diverse, equitable, and sustainable new industry in New York State.

Social equity funding may be the biggest difference between the dueling marijuana legalization efforts, but that disagreement pales in comparison to the macro-problems found in both proposals. Our legislators would be smart to look into the issues that have plagued other states post-legalization.

Despite having an extensive cultivation network, a glut of pro-legalization politicians, and the country's largest population of cannabis consumers, California is seeing its legal marijuana market implode. Prohibitively high taxes and exceptionally burdensome regulations have driven prices so high that patients and consumers are left with no choice but to buy products from unlicensed sources. As a result, experts estimate 85-90% of California's cannabis sales are made in the unregulated market. This shift has bankrupted smaller marijunana outfits and forced larger cannabis companies to constrict and consolidate. If California's problems continue to go unaddressed, they could very well work to increase organized crime's influence in the industry.

It's difficult to shed a tear when you learn about the troubles of shady operators like MedMen. That said, both Cuomo's Cannabis Regulation and Taxation Act and the Legislature's Marijuana Regulation and Taxation Act create a taxation and regulatory structure that would make it nearly impossible for even the most well-capitalized cannabis corporation to survive, let alone a small, rural, and/or minority-owned business.

We can't forget that a non-functional legal sector means no money for social equity initiatives. If we want these programs to thrive, we'd be wise to look to the regulatory environment in cannabis markets like Colorado — a place where the state's $2 billion in annual cannabis tax revenue can actually help fund social services. To his credit, Cuomo recently announced he'll be heading to other legal states to learn more about what strategies have and haven't worked in their marijuana markets.

Another knock on New York's legalization bills? The lack of nuance. Even if the Legislature manages to secure social equity funding, what's its plan for steering that money into the communities it's meant to serve? Given state-run programs are floundering across the country, the how is an increasingly important — and often underlooked — question.

Why are so many social equity initiatives struggling? One reason is the fact they focus (almost exclusively) on creating licensing processes that prioritize businesses run by individuals that have been disproportionately impacted by cannabis prohibition. Facilitating entrepreneurship in rural and minority communities is a laudable goal, no doubt, but even if those programs help businesses navigate the byzantine patchwork of local and state regulations, they don't help them access the capital (a couple million dollars, at least) required to get a cannabis company up and running.

For argument's sake, let's just say New York's social equity-focused licensing program—as written—is successful (an outcome that's eluded other legal states). The bill mainly focuses on prioritized business licenses—a critical issue of course, but still an effort that would impact a relatively small number of people. While I recognize legislators are looking for their ribbon-cutting moment, wouldn't it also be smart to put as much effort into building wealth via workforce development programs? Or create a more concrete plan for reinvesting tax revenues directly into underserved communities?

Given the sordid history and devastating consequences of marijuna prohibition, it's clear New York has a once-in-a-lifetime opportunity—as well as a moral imperative—to create a diverse, equitable and sustainable legal cannabis industry. At the same time, as we evaluate social equity initiatives across the country, it's also quite apparent we need to come up with smarter, more impactful ways to start "righting the wrongs of the War on Drugs."

***
Natalie Papillion is the Founder and CEO of The Equity Organization, a nonprofit focused on creating a diverse and equitable legal cannabis industry. On Twitter @npapillion & @Equityorg.