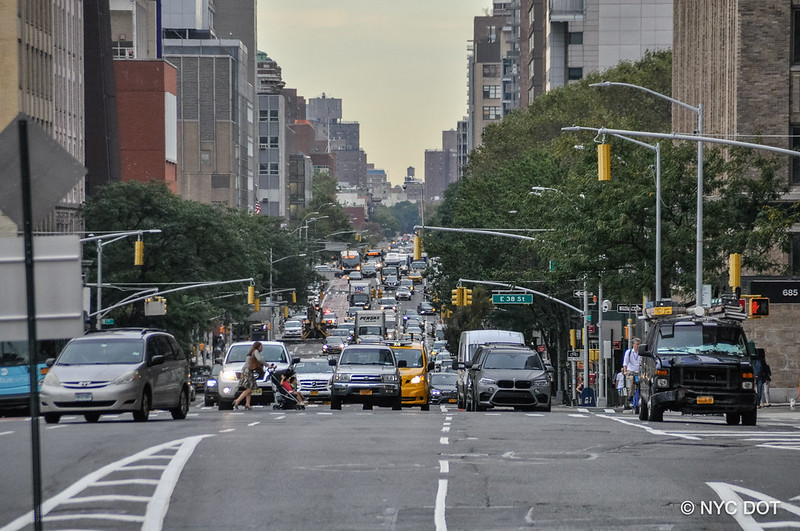 Automotive traffic congestion is a major societal problem. Its human cost is measured in jobs lost because of buses that never seem to run on time, daycare late fees straining family budgets, and dinners reheated in the microwave. Traffic also slows commerce, with truckloads of e-commerce parcels and industry inputs sitting in the same roadway backlogs as drivers and passengers. In short, state and local governments are working to improve traffic conditions every day for good reason.

One primary cause of traffic is “cruising” behavior — the act of driving around searching for someone or something on the street. The oft-repeated statistic from leading parking professor Donald Shoup is that about 30 percent of urban traffic consists of cruising, although the observed range can vary significantly among cities.

The New York for-hire vehicle proposal would target one form of cruising by one subset of road users in its effort to improve traffic congestion. TNC drivers certainly drive around alone, waiting for a fare to cause their phones to ping. But they’re not alone; many other people are doing a version of the same thing.

Taxis cruise around in search of hailing pedestrians on the streets. Food delivery drivers look for somewhere to idle while they pick up orders. And most commonly of all, individual drivers in personal vehicles wander the streets, intent on finding an empty parking spot beside a city-owned curb. Any political change that seeks to address traffic caused by cruising must reckon with the fact that cruising is a ubiquitous driving behavior that’s carried out by almost all drivers, not just those that move others around for a fee.

But that would be a far more challenging change to implement than shunting the burden onto a fraction of drivers. While this fraction spends a lot of time on the road, non-TNC drivers still make up the majority of traffic, and dealing with cruising by this majority would do far more for congestion than regulating TNC drivers alone.

If direct, widespread limits on cruising aren’t politically viable or technologically reliable, it may be better to view cruising as more of a symptom of poor transportation policy decisions than a disease in and of itself — and to treat the underlying causes instead. As professor Shoup has explained for decades, misaligned parking and road prices are what encourage wasteful traffic behaviors that include cruising.

Policymakers who want to get at the root cause of this issue are better off shifting their energies toward the political lift of raising the price of street parking to ensure spaces regularly change hands. Higher rates should be universal across the city such that residents who drive can expect to pay everywhere, preventing the incentive to cruise for free parking before it happens.

Unwinding parking subsidies remains a challenging political issue, but one that stands to improve urban traffic wherever changes are made. Unfortunately, New York’s cruising reform proposal misses this entirely. One would hope traffic-reforming politicians in the city and elsewhere will opt for a more complete policy response.

***
Nick Zaiac is a resident fellow in transportation and infrastructure at the R Street Institute. On Twitter @NickZaiac & @RSI.