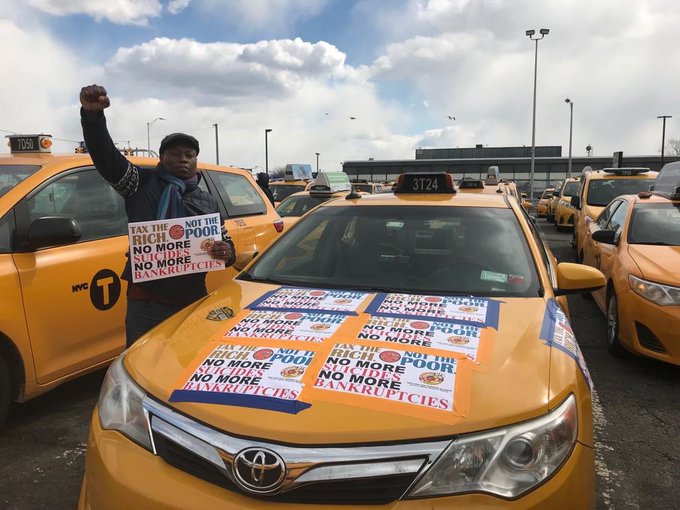 In the past month, the coronavirus pandemic has brought our world to a standstill, causing emotional and financial hardships for Americans around the country. As schools, restaurants, and retailers across New York shutter indefinitely, it is clear that no industry, or worker, will go unaffected.

Among those hit hardest, however, will be New York’s over 21,000 yellow and green taxi drivers, who have already been struggling to survive in the wake of the financial ruin of the medallion debt crisis.

Just weeks into unprecedented travel restrictions, event cancellations, and shelter-in-place policies, taxi workers are already feeling the crushing weight of lost business worse than most. Recent reports describe drivers searching for hours without being able to pick up a single fare, to say nothing of the heightened risk they face of catching the virus if they are even lucky enough to get a few fares during a shift.

For New York’s taxi drivers, the coronavirus pandemic has exponentially exacerbated the financial problems they faced before the outbreak, with no end in sight. As the coronavirus outbreak worsens, however, it doesn’t need to be so devastating for taxi drivers. In fact, it could be what finally brings about needed, lasting change to the industry.

As has come to light in recent years, the value of taxi medallions was recklessly and artificially raised by powerful industry insiders and city government for nearly a decade. The resulting bubble was frighteningly identical to the housing market crash that set off the Great Recession in 2008, trapping thousands of low- to middle-income owner-drivers, many of them immigrants, into sub-prime loans. Only instead of losing their homes, taxi workers lost their businesses and livelihoods.

Both city government and the lending industry share blame for where the taxi industry is today. While the city’s Taxi and Limousine Commission made over $800 million off medallion sales between 2004 and 2014 alone, it is the predatory lenders who nefariously created unfavorable contracts with paralyzing interest rates and conditions. The predictable result was countless taxi owner-drivers saddled with hundreds of thousands of dollars in debt on an investment they were falsely promised could never fail.

Now it is time to act.

While New York rolls out programs to support small business owners and gig workers alike during this unprecedented public health and economic crisis, the city cannot and must not again fail the taxi drivers it failed to protect once before. Mayor de Blasio has already announced his administration will offer zero interest loans to small businesses that have experienced a loss of revenue because of the coronavirus fallout. A similar program should be created for taxi drivers, whose medallion-licensed taxis are themselves small businesses. It’s encouraging that a new temporary program will give TLC licensed drivers jobs delivering food to senior citizens who can't leave home during the shelter-in-place order.

But these programs are simply stopgaps that will make conditions for taxi workers more tolerable during this crisis. What taxi workers truly need is a path away from the debt that weighs them down and towards a more sustainable, financially sound future.

Just weeks before the coronavirus outbreak began, a City Council-created commission produced a report outlining how the City could steer the city’s taxi owner-drivers out of their debt struggles and into a successful future. Core to the proposal was leveraging public-private partnerships in which mission-driven firms such as ours work with taxi drivers to provide the necessary structural and technological changes they need to be competitive with the likes of Uber and Lyft.

Though it should have been done years ago, the city must now heed the call to action by Bhairavi Desai and the Taxi Workers Alliance to cancel all medallion owner debt over $150,000, while also guaranteeing them paid sick leave.

While coronavirus has exposed just how vulnerable New York’s taxi drivers are, the city is now facing the perfect moment to take bold action that could help so many hard-working drivers, including many immigrants, and save the yellow taxi industry that is deeply embedded in the fabric of our city. Taking action on the commission’s plan immediately is the only way to truly answer the calls of the Taxi Workers Alliance and their members, and the timing could not be more prudent.

New York left these drivers behind once before. It’s well past time for our city to not only give them a fighting chance to survive this pandemic, but an opportunity to rebuild their business so they can thrive for decades to come.

***
Zahid Biviji and Mihir Dange are the Co-Founders of Wapanda, a mission-driven transportation infrastructure technology platform. On Twitter @Wapandaco.