An altered image from one of Gov. Cuomo's briefings (by Aaron Carr, the author)

I regret to inform you that the heart and soul of New York City is under attack. And not just by COVID-19, which, as of April 27, has taken the lives of an astonishing 16,936 New York City residents, but by fictional statements made by our own governor, Andrew Cuomo, who has deceptively blamed the spread of this infectious, vicious, and deadly disease primarily on our city's population density.

The governor deserves commendation for often being a voice of reason in this crisis, but he deserves condemnation for failing to acknowledge his own mistakes and for attempting to distract from them by scapegoating.

Before a national audience of millions, the governor accuses our city’s density of being “dangerous” and “destructive.” But he’s wrong. Density is not dangerous and destructive –– a failure to plan, a failure to prepare, and a failure to act early is what has allowed COVID-19 to wreak devastation on New York. (Unfortunately, Mayor de Blasio has also relied heavily on this argument)

It is certainly fair to ask, “Isn’t density a factor?” And of course density is a factor, it’s just not the factor, and in no, way, shape, or form the most important factor.

California, for example, has many densely populated cities, yet responded much quicker than New York to the novel coronavirus. Governor Gavin Newsom’s stay-at-home order (the first in the country) was implemented on March 19 when California had just 1,006 confirmed cases. Governor Cuomo, on the other hand, delayed implementing such a decision until March 22 when New York had a whopping 15,168 confirmed cases.

Just consider for a moment the millions of New Yorkers who likely came in contact with each other during those few days — going to work, walking on crowded sidewalks, riding a packed subway car, rubbing shoulders, coughing, touching common surfaces, and all the while transmitting this highly infectious and contagious disease.

In an interview with the New York Times, Dr. Thomas R. Frieden, the former head of the Centers for Disease Control and Prevention and former commissioner of the city’s Health Department, said “if the state and city had adopted widespread social-distancing measures a week or two earlier, including closing schools, stores and restaurants, then the estimated death toll from the outbreak might have been reduced by 50-80 percent.”

So, it should come as no surprise that, despite accounting for just 2.5% –– one-fortieth –– of America’s population, New York City represents nearly one-third of America’s COVID-19 fatalities. 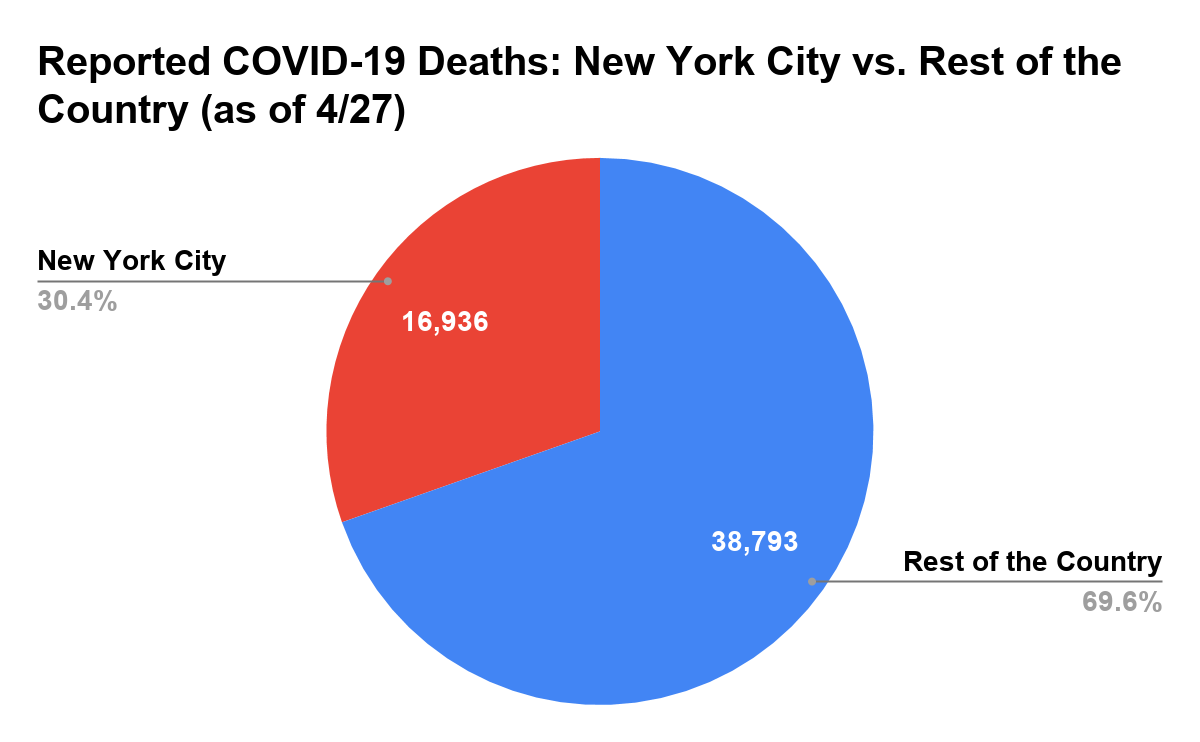 Yet, instead of taking responsibility for his slow response, Governor Cuomo has launched a scapegoat campaign, blaming New York City’s natural identity -- our density -- as the source of the problem.

But the data, while correlational, strongly suggests that the governor is wrong:

If density is so destructive, there should be a strong positive correlation between the density of the five boroughs and number of COVID-19 fatalities and cases -- particularly in Manhattan, which is not just the densest part of New York City, but of America. 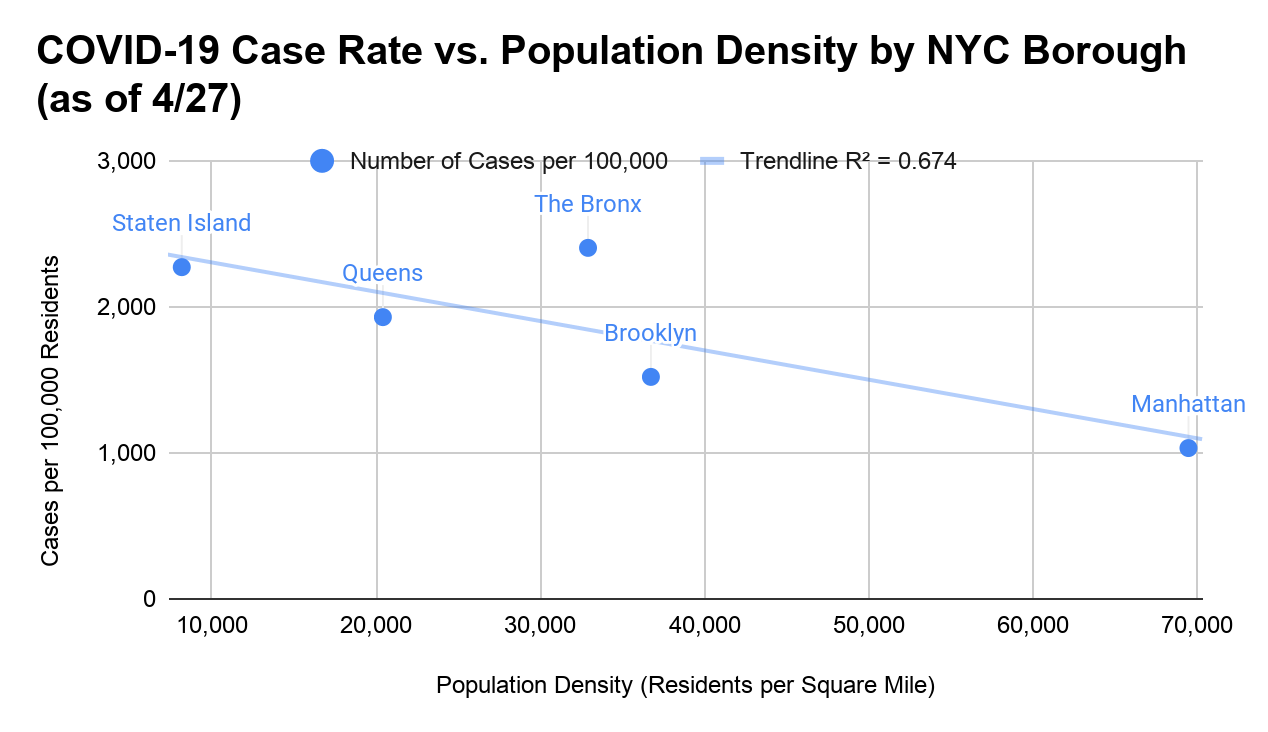 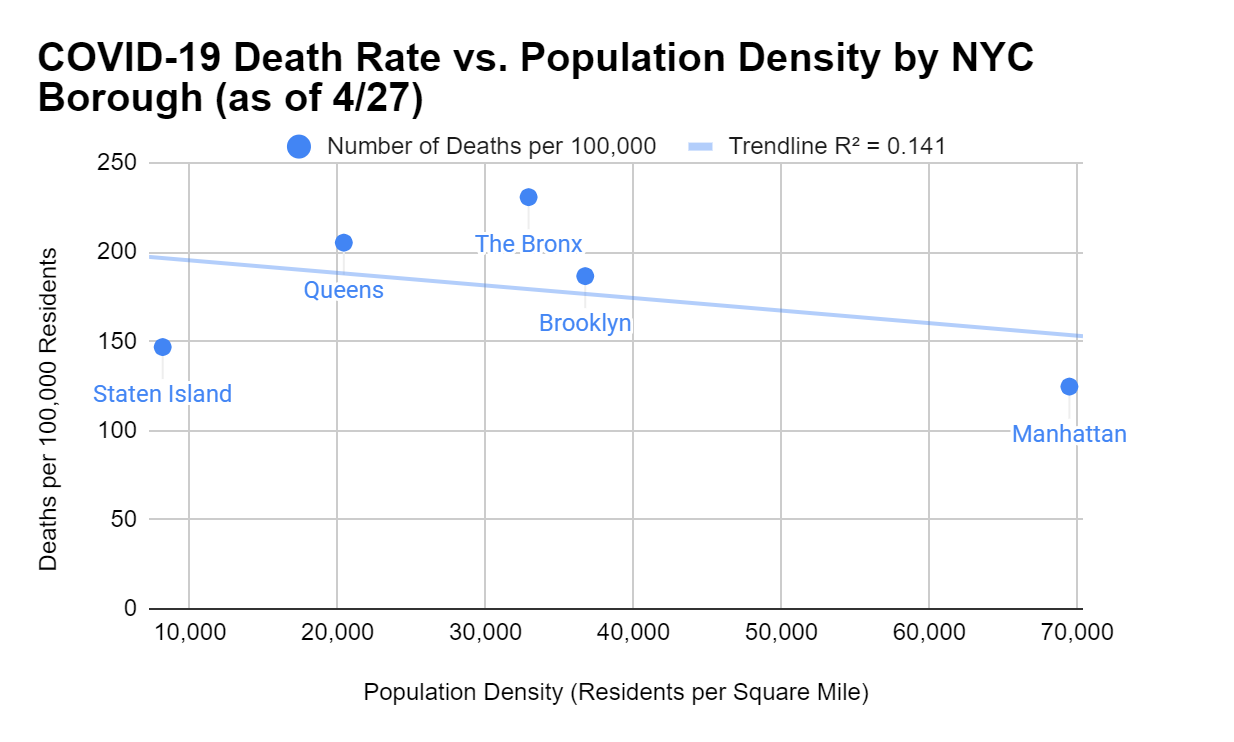 If density is so destructive, New York City should not have 770 times the fatalities of San Francisco -- the second-densest large city in the United States -- despite having only 10 times the population. 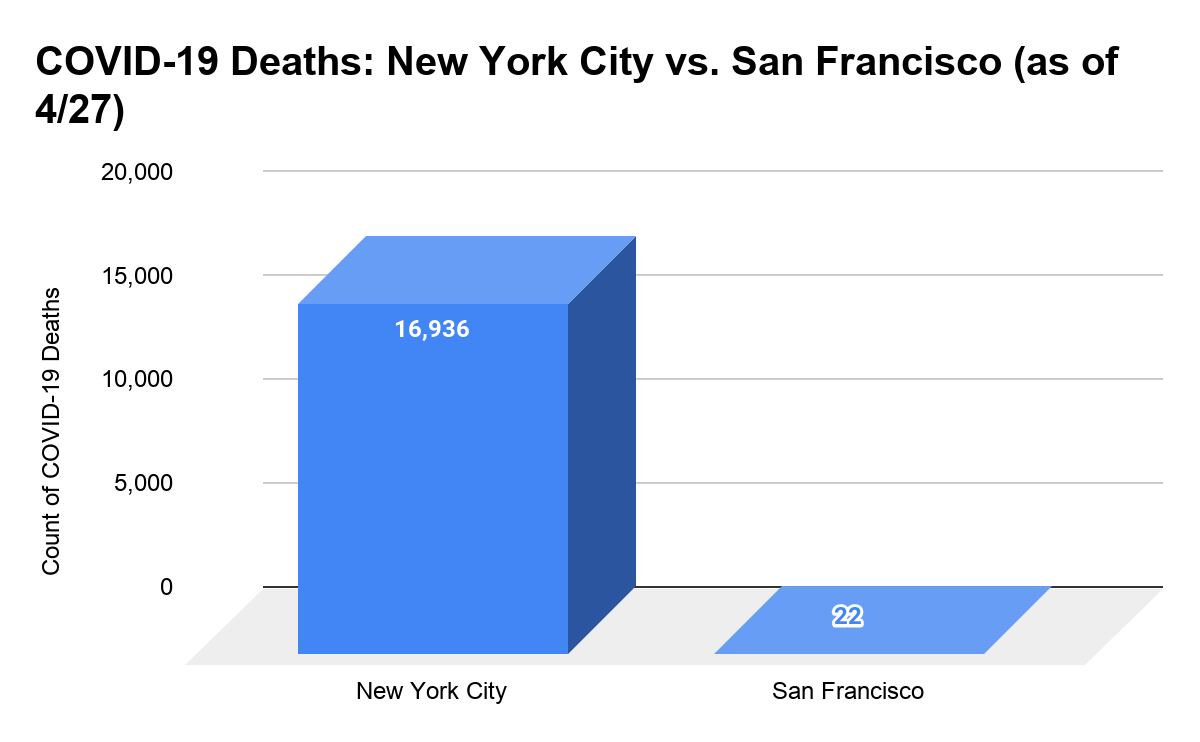 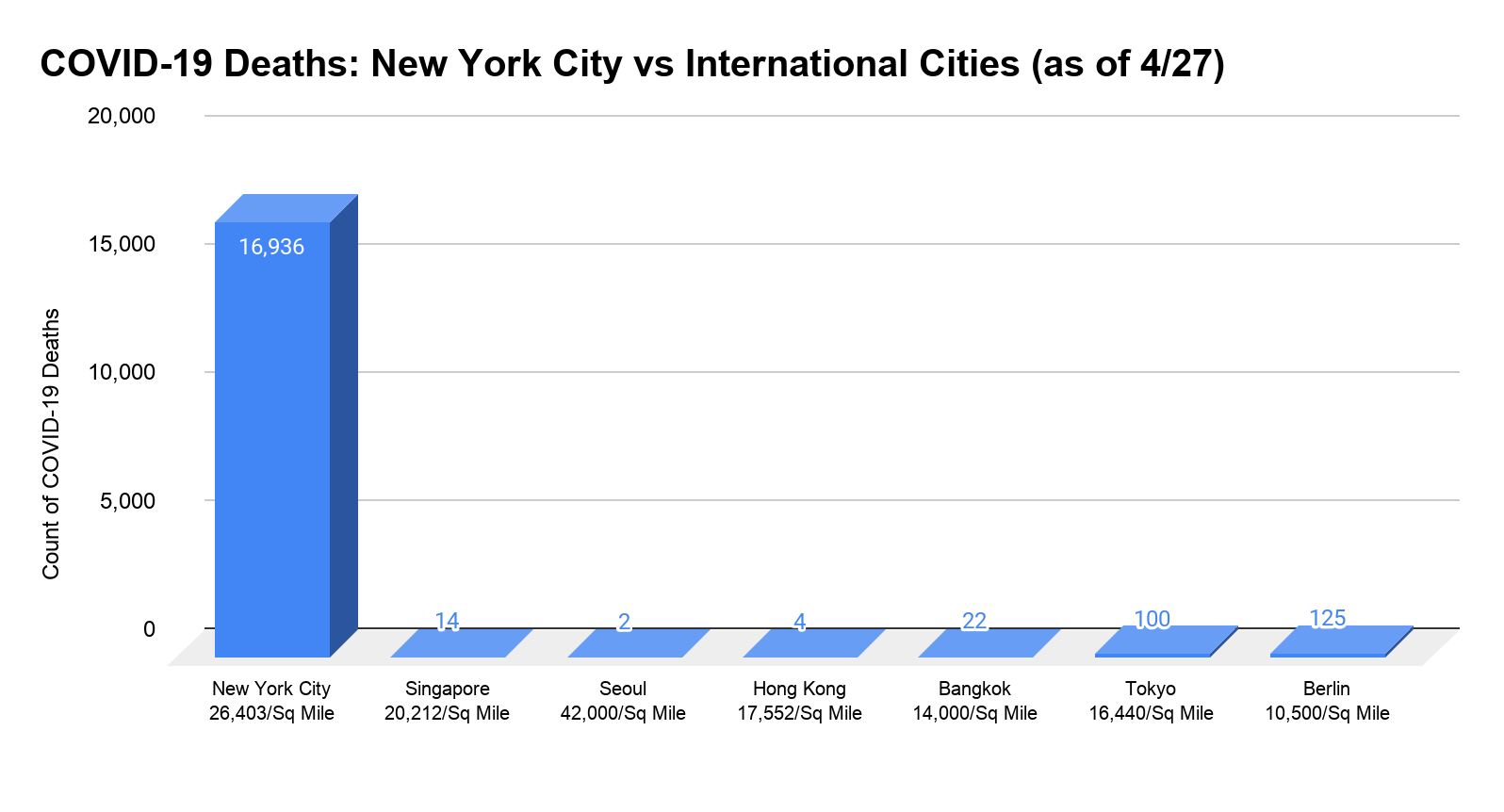 If density is so destructive, a single senior center in Cobble Hill, Brooklyn, wouldn’t have had more deaths than entire cities and countries. But it has. 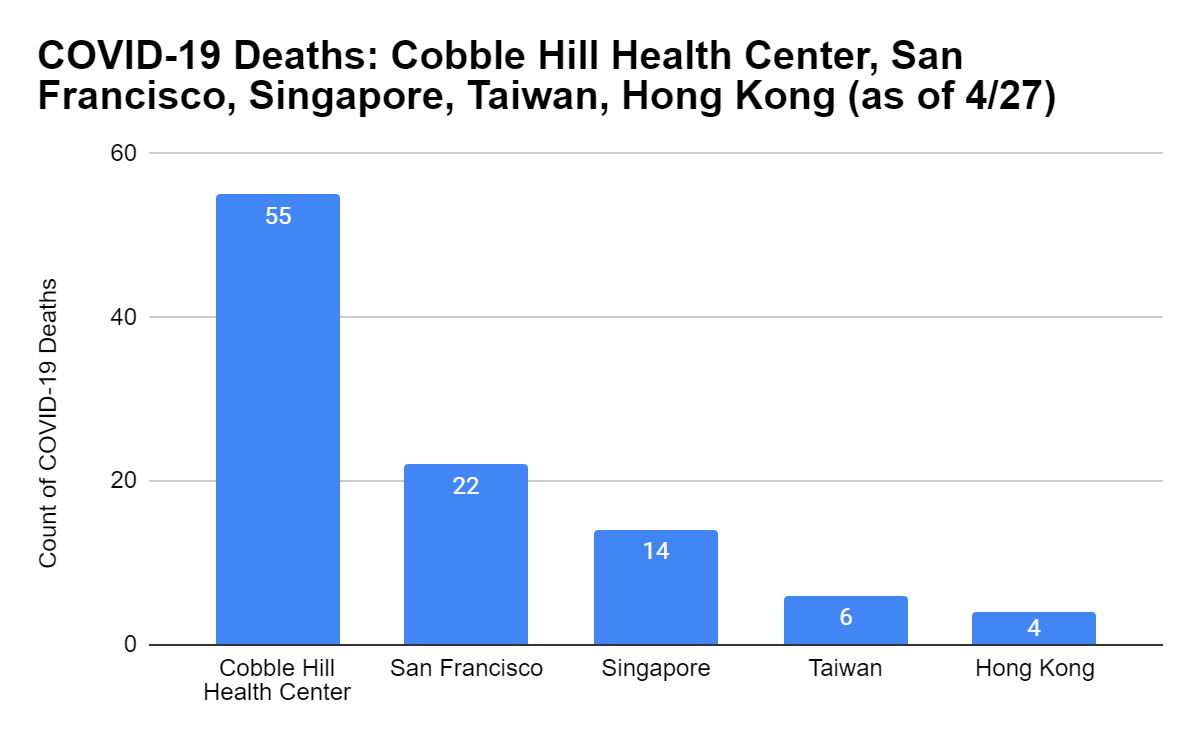 If density is so destructive, why does New York City have 9,621 more deaths than Japan, South Korea, Australia, Thailand, Taiwan, Germany, Hong Kong, Singapore, New Zealand, and Austria combined, while all these countries are home to dense cities and a total population of 400 million people. 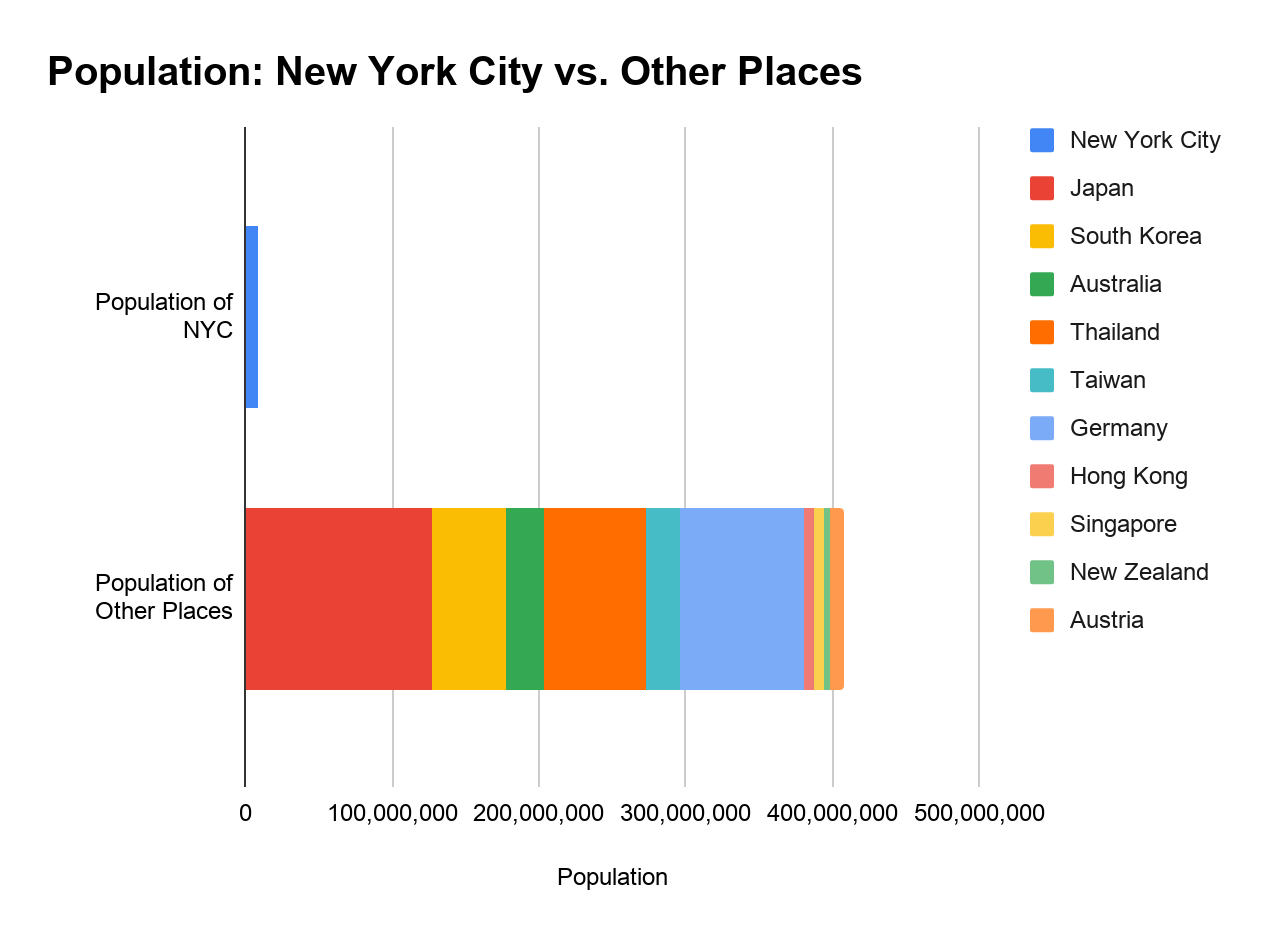 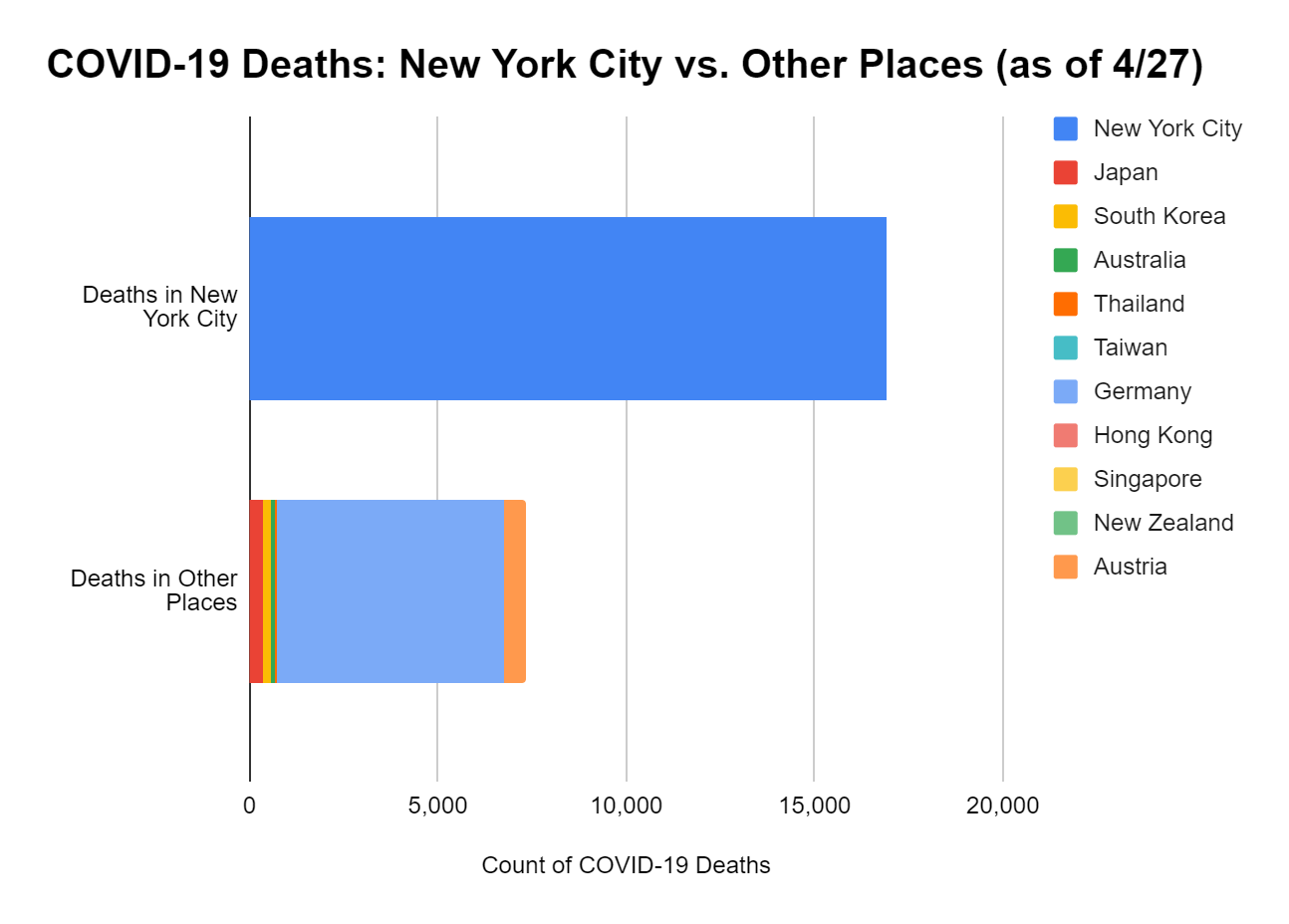 Here’s the rub: Cuomo’s attack on density actually has little to do with density and everything to do with politics. Cuomo is a master politician, and like any master politician, he is a master of words. And, Cuomo -- always choreographed and calculated -- chooses his words with precision. In this case, by intentionally conflating the word “density” with “crowding,” which are two very different things. Density refers to the number of people per square mile of land. Crowding is when a large group of people convene together in a small space.

In a pandemic, it’s crowding -- not density -- that’s destiny.

Take for instance, the Smithfield Foods pork plant in Sioux Falls, South Dakota. More cases have been linked to this one plant than all of Seoul, South Korea, a city with 9.7 million people, in a country that at one point had the second most COVID-19 cases in the world. 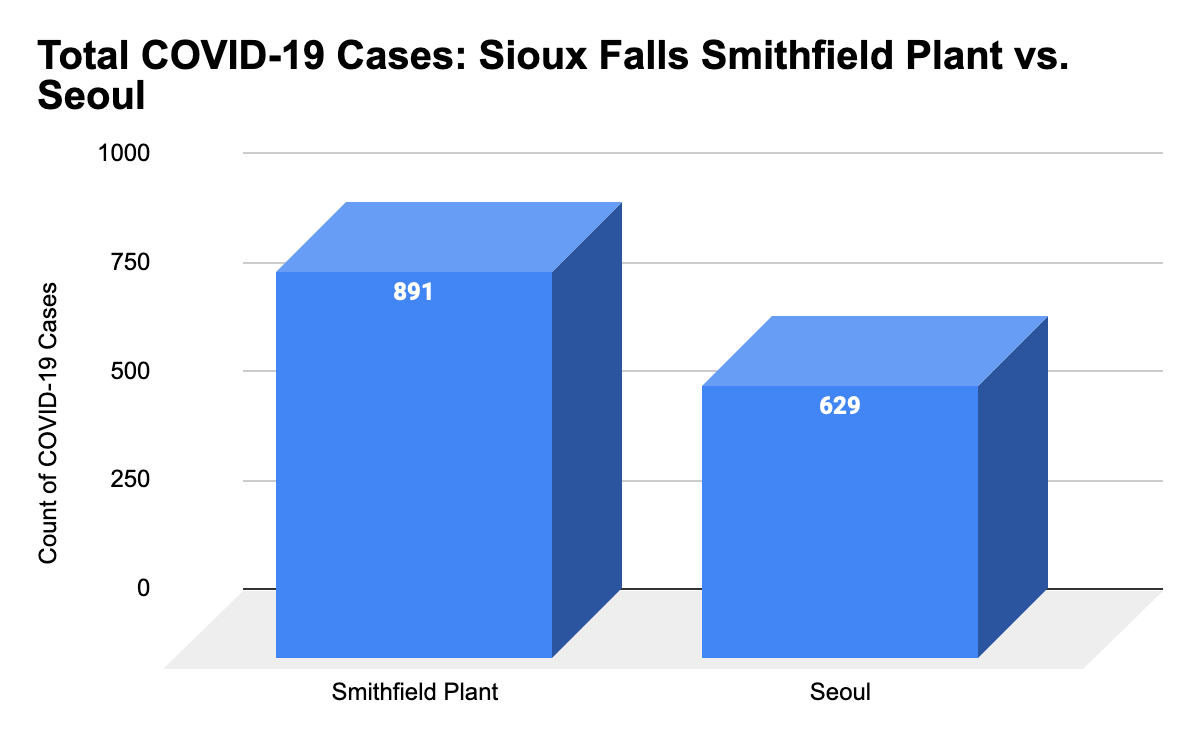 The problem at the Smithfield Plant wasn’t density, it was crowding. And the same rule applies to cities in general.

San Francisco, for example, did not become a model for the country by reducing density, but by reducing crowding -- through aggressive, decisive, early action.

The reason Cuomo is putting his eggs in the density basket is because, unlike crowding, he can’t control density and therefore he can’t be blamed for the outcome. But knowing that he could control crowding early, and didn’t, the question then becomes, “why did Cuomo delay?,” and that is the last question Cuomo wants to answer.

To be sure, the majority of the blame falls on the incompetence, ineptitude, and callousness of the Trump administration, for, among other things, ignoring multiple warnings from his intelligence agencies and failing to provide states like ours with the support so desperately needed. History will not be kind to the president.

But in our decentralized system, it is governors that have jurisdiction over stay-at-home orders and the power to enforce them. Furthermore, the scientific literature demonstrates that early social distancing can be crucial in combating infectious disease.

There is no doubt that Governor Cuomo deserves praise for the exceptional job he has done keeping the public at ease and our city, state, and nation informed. But if we are going to learn lessons from COVID-19 and be better prepared for the future, we need an honest assessment of what went wrong. One that leads to a simple question of why 16,936 people have died in New York City, when only 22 have died in San Francisco, 4 in Hong Kong, and 2 in Seoul, South Korea.

The answer is not density -- it’s planning, preparation, and early action.