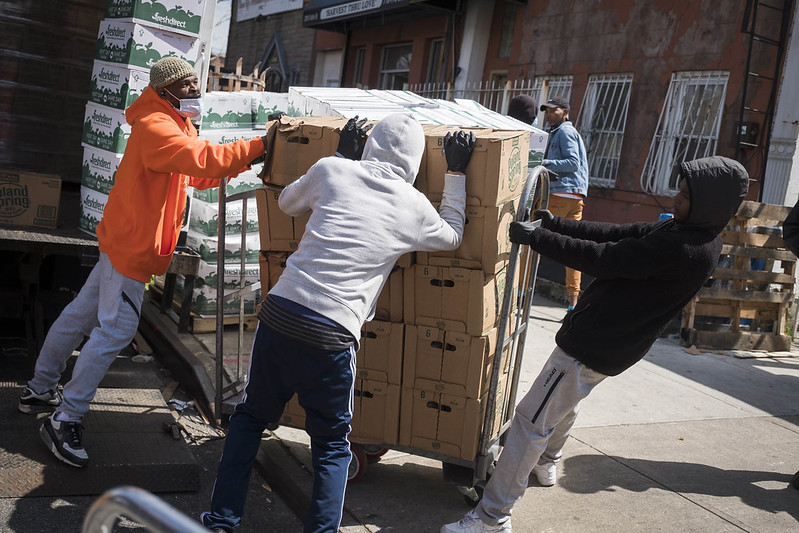 Every day, New Yorkers are faced with the realities of the COVID-19 pandemic, an unprecedented public health and economic crisis ravaging our city. As the federal government continues to recklessly shirk responsibility, state and city governments strain to support hospitals and those impacted by the pandemic with their depleted budgets, leaving low-income and marginalized communities more vulnerable than ever.

In their wake, mutual aid and nonprofit organizations are expanding the critical work they do in their communities in an effort to make up the difference. In fact, when New York is faced with crisis, it is often our community-based organizations that respond most quickly to deliver aid and emergency services in neighborhoods across all five boroughs. These organizations are often unfortunately doing this crucial work without coordination, which as we’ve seen in our public and private hospital systems, can result in duplicitous efforts and competition for the same resources to serve the same people.

When faced with an emergency, where organizational leaders cannot attend each other’s planning meetings or digital town halls to coordinate efforts, we must ensure that mutual aid groups and nonprofits are working together to deliver the most good to the greatest number of New Yorkers.

New York City government has a responsibility to step in and assist these efforts. We are calling for legislation that would require the city to create a framework to support and aid in the creation of emergency community response groups, arming every neighborhood with an established means of coordination among community-based organizations when disaster strikes. In the spirit of continuity and improvement, we must learn from our response to this and previous disasters and prioritize funding for preparedness groups and Voluntary Organizations Active in Disaster, otherwise known as VOADs.

Such legislation could be modeled on creating more standing coalitions such as LES Ready! - a grassroots coalition of community organizations across the Lower East Side and Chinatown that was developed in response to Superstorm Sandy, to ensure there is an active and coordinated community-based emergency response.

Thanks to LES Ready!, the efforts of our existing community-based organizations, mutual aid groups, and nonprofits in our neighborhood have been streamlined and effective in ensuring that vulnerable community members are receiving the food, medical attention, and emergency resources they need. Every group in LES Ready! is part of a larger communications structure that knows what the others are doing and ensures an exchange of critical information. The coalition also has a direct line to the city’s Office of Emergency Management both during non-emergency periods and in the midst of crises.

These community networks are needed even more for the COVID-19 pandemic, which is proving even more devastating to our communities city-wide than Superstorm Sandy or the September 11, 2001 attacks. A survey conducted by the New York Federal Reserve found that the pandemic could wipe out about one-fifth of the city’s small businesses. While the federal government has allocated billions of dollars in funding to bolster the economy, distribution efforts have been chaotic at best. Overwhelming demand, shifting borrowing rules, regulations that favored big corporations over small minority-owned businesses, and a lack of infrastructure have all combined to create a bureaucratic nightmare for businesses on the brink.

By contrast, our local groups have responded quickly to the challenge. For example, AAFE, a long-time community lender, was able to establish an emergency loan fund repurposing existing loan capital and private bank fundraising by mid-March. The first loan was processed less than a week after the fund was announced.

AAFE and its fellow local community-based organizations, mutual aid groups, and nonprofits are able to be so nimble because of the coordination made possible through local grassroots networks and routine communication with agencies and officials. With a similar framework supported, funded, and implemented in every neighborhood across all five boroughs, the response efforts of all community-based organizations could be just as effective in delivering crucial support where it’s needed as quickly as possible.

And as part of this focus on community-led approaches to planning for and recovering from disaster, we must also establish a civilian advisory board with the capability to evaluate the city’s disaster response efforts. This board would oversee how the city is spending its resources and fostering communication with the groups on the front lines to help ensure, when the time comes, that direct public emergency services are getting to where they are most needed.

The COVID-19 pandemic has revealed so many gaping holes in local and national government systems and structures. In this period of crisis it feels impossible to look beyond the next week, or even the next day, but we must do so to ensure we are applying the lessons of today to the tests of the future.

New York will overcome this crisis. Let’s be sure we’re best prepared to overcome the next one, too.