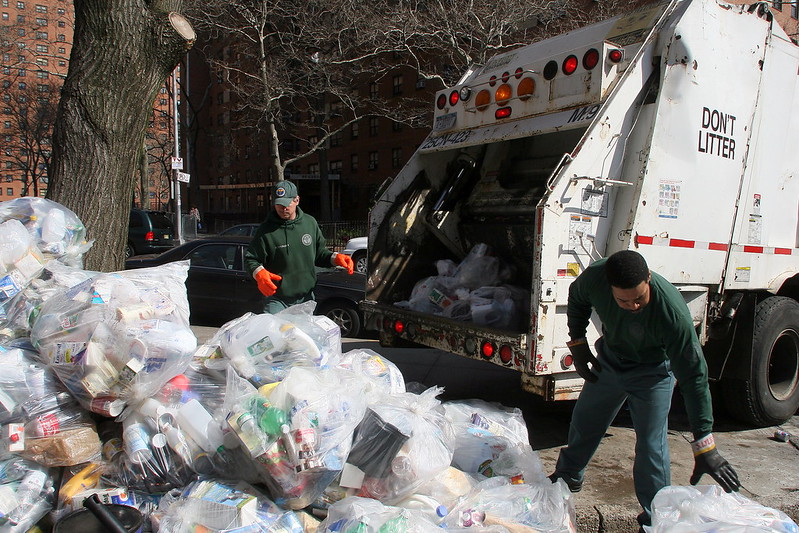 The authors begin their piece:

“While is it is no secret that the city’s curbside organics collection program doesn’t pay for itself, that’s only half the story.  It is true that the program currently generates a small amount of revenue, about $50,000.  However, if properly executed, the program has the potential to generate millions of dollars in revenue for the city.”

The first fallacy once again raises the belief that a recycling-related program can one day generate sufficient revenues to significantly offset or eliminate the cost of its operation. Second, and perhaps more significant, is the belief that the organics collection program as currently conceived and executed should be further expanded.

To justify the above speculations the authors quote from an “analysis” performed by the Independent Budget Office estimating $22.5 million in possible future revenues from composting. This analysis is based upon an If, Then series of hypotheses untethered from current programmatic realities. The authors go on to further speculate that “realizing the increased revenue from organics recycling is dependent upon expansion.”

In the midst of a pandemic and the resulting financial crisis, it is irresponsible for elected officials to call for the expansion of a program that is clearly not working. Successful recycling collection programs are evaluated on a number of factors. In the case of an organics collection program, these most critical factors are: 1) A program design that overcomes participants’ inherent revulsion to decaying organic waste; 2) Maintaining sustained and consistent levels of participation by the generator (container set-out). Without robust participation by all parties targeted by the program, neither collection nor processing can be efficient and sustainable; 3) The three basic means by which to drive participation: regular public education, tangible enforcement, and differential charging for refuse versus recycling services. The latter two options for increasing participation have typically been strongly opposed by most local elected officials and to date there has been very limited investment in the first option.

In recycling programs, participation drives all of the other operational factors like collection efficiency and the successful processing of what is ultimately collected.   There are many other challenges that can contribute to the success or failure of collection and processing but without sustained and adequate participation, organics programs fail. Based solely on the participation levels of the current organics program it is unsustainable and expansion is unjustified.

The authors next invoke the historical decision in 2002, following the recession brought about by the events of 9/11, to temporarily suspend the collection of plastics and glass as justification for why organics should not now be suspended. They argue that once restored in stages over the next two years following 2002, the recycling program never regained the same participation rates it experienced prior to this suspension. While it is true that the gross diversion rates of recyclables did not go back to the exact same levels as prior to 2002, there are a number of reasons for this change in diversion that are related to the suspension but unrelated to the speculations of the authors.

Chief among those was that post-suspension sanitation workers were better trained to no longer pick up what was essentially garbage in a recycling can or bag, but instead leave it for garbage collections.  The recycling diversion rate (simply the weight of what was formerly trash, diverted to collection by recycling trucks) was in fact higher prior to suspension but so was the post-collection residue rate -- the rate of what the processors had to throw out as non-recyclables (garbage) received along with recyclables.

What the recession following 9/11 allowed was for a suspension of business-as-usual thinking, both political and operational, which then provided an opportunity to redesign the metal, glass, and plastics collection and processing program.

A little more history
Going back to the 1990s and the recession during the Dinkins administration, the city had decided to abandon investment in recycling processing infrastructure and to instead rely solely upon the private sector for the processing of recyclables. City contracts were based upon the lowest bid or lowest net cost to the Department of Sanitation for the processing of those recyclables; contracts that ultimately placed the entire risk of post-consumer commodity market price fluctuation upon the contractors.

While this arrangement worked for well over a decade, following 9/11 and the experience all New York City-contracted recyclers had shipping recyclables out of the Port of Newark for many months, those same recyclers decided it was time to assume far less of the risk associated with processing and marketing the city’s recyclables. In addition, when Sanitation released its rebid of the same processing in contracts in mid-2002 it decided in an unstable marketplace to reduce the risks to its contractors by assuming the market risk instead of the contractor, rather than sharing revenues the sanitation department would be the recipient of most of the revenues, both good and bad, and the contractor would bid a straight processing fee per ton, which would include the contractor’s overhead and profit.

The market instability plus the new contract structure resulted in what appeared to many as far higher prices, when in fact the prices after revenue offsets would have likely been similar. However, in the rush for cost-cutting following 9/11, one of the proposed cuts by the then-commissioner was to eliminate the entire metal, glass, and plastics collection program.

After much back-and-forth between the administration and the City Council leading up to the 2002 fiscal year budget, a compromise was made to temporarily suspend the collection of plastics and glass while continuing to collect just metal under a straightforward revenue-only contract the recycling bureau had in place. The former metal, glass, and plastics collection program was then scheduled through political compromise, and memorialized into law, for full restoration approximately two years later.

At the time the city already had long-term, 20-plus-year revenue contracts with private firms for the acceptance and processing of paper but lacked anything similar with metal, glass, and plastics. Because of the limited revenue-generating potential of the metal, glass, and plastics recycling stream, combined with the added cost of processing the same complex heterogeneous stream, unlike with paper, it was incumbent upon the city to make the needed investment to ensure the proper infrastructure to accept, process, and market the materials collected.

The political and operational rethinking provided by this opportunity resulted in the release by the recycling office of a request-for-proposals for a public-private partnership to process the city’s metal, glass, and plastics for the next 20-40 years on a piece of land provided by the city.

Without this opportunity, it is likely that the metal, glass, and plastics collection program, if it still existed, would have experienced many more ups and downs between 2004 and now, as it had since its inception. Instead of looking to expand an organics program that is currently purely voluntary and with a participation rate that dooms it to failure, it would be far better to use this opportunity to suspend the program and rethink all aspects of it to ensure that if and when it is restored, it is designed to succeed rather than fail.

Presently the organics program relies almost entirely upon a private-sector jury-rigged infrastructure for receiving, processing, and marketing the organics it collects.  An infrastructure like that used for originally processing the metal, glass, and plastics stream, designed for another purpose and a wholly different quality stream but modified to a limited degree to answer the current call and secure a contract.

Times of crisis provide opportunities, if seized, to abandon conventional thinking and instead be creative. Rather than elected officials attempting to satisfy politically powerful constituencies such as the Natural Resources Defense Council by calling for restitution of a failing program, they should use the present crisis as an opportunity to call for the redesign of the program for operational success rather than political success.