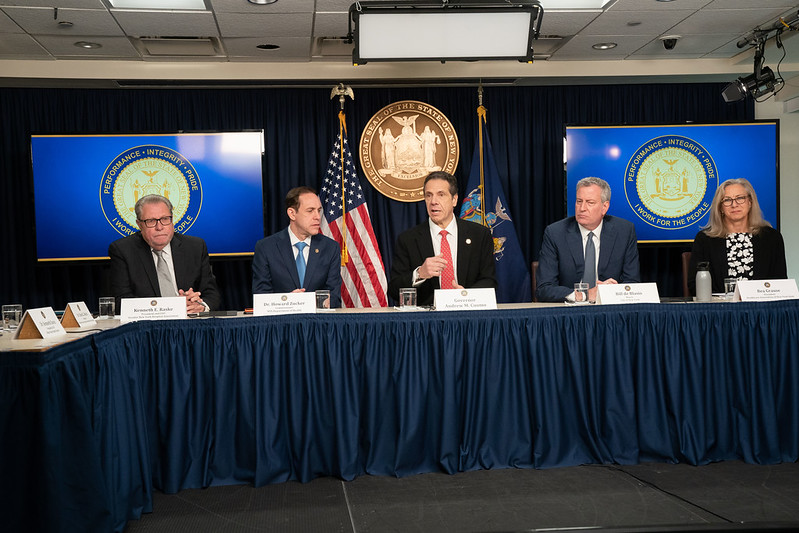 When it became clear to Jan-Erik Olsson that he wouldn’t be able to flee the bank he was attempting to rob, he decided to take hostages. For six days in August of 1973, the four hostages and their captor got to know each other, and once rescued, the hostages not only refused to testify against Jan-Erik, they actually raised money for his defense. This bizarre phenomenon, where “hostages develop a psychological alliance with their captors” is now known as Stockholm Syndrome.

As coronavirus lockdown begins to lift in New York City and residents begin to resume their lives in the “new normal,” the signs of Stockholm Syndrome are all around us.

Despite overseeing what is objectively the world’s least effective response to coronavirus in the entire world, resulting in the deaths of a staggering 0.2% of the city’s population, Governor Andrew Cuomo and Mayor Bill de Blasio had, as of May 6, unfathomably high approval ratings of 81% and 63%, respectively.

It’s natural, of course, for people to support their political leaders in a time of chaos and crisis. The media took it to a new level, though. During the peak of the crisis in early April, Rolling Stone published Andrew Cuomo Takes Charge, a glowing piece of journalistic pomp; a prominent local politics magazine showcased Cuomo as “the most popular man in America” and ”the nation’s most eligible bachelor”; and another publication called him “America’s Governor” while he made friendly interview appearances all over cable news and those stations also carried his daily briefings live for weeks, growing his allure. Trevor Noah and Ellen DeGeneres came out as #CuomoSexual at the same time over 500 New York City residents were dying a day -- the most of any city in the world.

And what’s responsible for New York City’s death count, now at over 17,000 confirmed and probable COVID-19 fatalities? Not leadership failure of course, but “density!” -- Cuomo, de Blasio, and even media outlets pointed to density, completely ignoring that Seoul, Tokyo, Taipei, Hong Kong, and Singapore, each as dense as New York City and with a combined population of over 40 million, lost fewer people over the entire crisis than New York City was losing every day during the first half of April.

During a crisis of this magnitude, it’s normal for the public to rally behind its leaders and for the media to act “responsibly” and amplify the public health messages coming from elected officials. But as a new phase of this crisis came into focus -- a “new normal” -- thoughtful media sources have begun to look beyond Cuomo’s charming press conferences and softball CNN interviews -- often with his own brother -- and at the cold, hard facts. The conclusions they’re coming to are not pretty: New York’s political leaders are to blame for tens of thousands of unnecessary deaths.

“Seattle’s Leaders Let Scientists Take the Lead. New York’s Did Not,” writes The New Yorker. “Two Coasts. One Virus. How New York Suffered Nearly 10 Times the Number of Deaths as California,” writes ProPublica, explaining how an efficient partnership between San Francisco and California leaders enabled them to effectively manage the crisis while the dysfunctional relationship between de Blasio and Cuomo doomed our city and state to become the epicenter of this preventable crisis.

“Lockdown Delays Cost at Least 36,000 Lives, Data Show,” writes The New York Times, indicating some 14,000 New Yorkers who died could be alive if New York City was locked down a week earlier than it was, when many parts of California closed up.

As this new reality began to sink into the public’s consciousness, Cuomo’s approval ratings began to “come back down to Earth.” Then: George Floyd’s murder at the hands of Minnesota police rocketed our city out of its obsessive focus on COVID-19 and into mass protest and the spectre of genuine civil unrest. Despite the very different circumstance of this new crisis, the response was remarkably similar to COVID-19: our government’s lack of preparedness led to high-profile failures, Cuomo called de Blasio’s leadership into question, and then they implemented unwise policies (a curfew that west coast cities quickly abandoned after seeing evidence other strategies would be more effective).

Before we can even take stock of the government’s response to the latest round of Black Lives Matter protests, the next crisis is already teed up: city residents refusing to comply with ongoing shutdown, social distancing, and mask-wearing orders.

This weekend, thousands of people all over the city took their “to go” drinks from the bar and, predictably, into the streets. A viral video of the festivities in the East Village resulted in Cuomo once again threatening an invasion of New York City.

Then on Monday, angry parents and elected officials in one of New York’s most conservative neighborhoods broke open a gate to a closed playground -- publicly defying the mayor in what is likely the opening salvo in a summer-long battle between New Yorkers who want the city to reopen and authorities who do not.

Between progressives mobilizing massive protests for police reform, apolitical crowds blatantly defying social distancing orders and open container laws, and conservatives engaging in direct action to open up public facilities and normalize city life -- is it fair to say we’re on the verge of a general uprising against our political leadership?

Maybe. But what can we do? The Democratic Party is in firm control of the city. Attempts to reform the party from the inside or challenge it from the outside have borne little fruit. At the state level, the Democrats and Republicans do everything they can -- state constitution be damned -- to ensure minor political parties can’t challenge a carefully negotiated balance of power in which downstate residents subsidize the free-wheeling, minimally-effective spending of our upstate-based government. And our status as a solidly blue state within an electoral college system focused almost entirely on “battlegrounds” gives us diminished national power.

It’s been easier for us, as a city, to pretend we’re living in a relatively functional democracy with relatively functional leaders, but this summer is changing that. The pandemic has made our collective delusions obvious to anyone who can count the dead. The Black Lives Matter movement has shown us that street mobilizations can turn up the pressure on pandering politicians. WIdespread noncompliance with government orders is evidence that people’s faith in government is breaking down.

I don’t know where we go from here, but I believe Plato when he said that “one of the penalties of refusing to participate in politics is that you end up being governed by your inferiors.”

So let's not waste this year’s lessons. Let’s commit to reforming our political system and electing anti-establishment leadership who can credibly claim that they can build a world-class government for our world-class city.

***
Devin Balkind is a software executive who ran for New York City Public Advocate in 2017 and 2019.