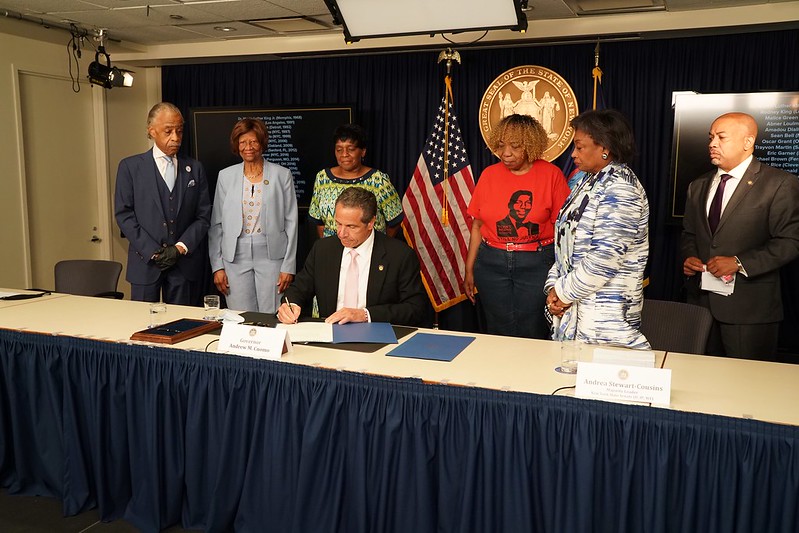 New York Governor Andrew Cuomo has been trying in his daily press briefings to position himself as the national voice of reason, truth, and compassion regarding the coronavirus. To that end, he has liberally signed an array of executive orders ranging from shutting down businesses and closing schools to limiting the size of social gatherings.

When the evidence revealed that COVID-19 was especially ravaging communities of color, the governor then tried to assume the mantle of race truth-teller by referring to the persistence and pervasiveness of racism in vital areas like housing, education, health, and employment. He even began to use visual aids to show that specific zip codes -- communities of color -- were hardest hit by the virus.

George Floyd’s murder by the police and the resulting uprisings across the country pushed COVID-19 out of the headlines. Not to be outdone, and to maintain his newfound national relevance, the governor started trying to use his bully pulpit to project himself as the voice of anti-racist criminal justice reformers. He quickly seized upon the calls to repeal Civil Rights Law 50-a that shielded police disciplinary records from the public. He appeared to have heard the community activists and families of loved ones killed by police who had for many years labored relentlessly for the repeal of 50-a. Now, with the national spotlight on police violence, the governor gave full-throated support to their efforts as if he were a long-time ally of the movement. He proclaimed, “I would sign a bill today that reforms 50-a. I would sign it today. Pass the bill. I will sign it today.”

Soon thereafter, the Legislature did send him such a bill as part of a criminal justice reform package, and with great fanfare the governor signed it, calling it the “most aggressive” police reform legislation in the country. He also used the occasion to condemn “injustice against minorities in America by the criminal justice system" and emphatically added, “Today...enough is enough.”

The governor was not yet finished signing criminal law reforms. In his effort to be seen as a national progressive spokesperson regarding police violence against people of color, he announced that he had signed an executive order making state funding to police agencies contingent on their developing plans to “reinvent and modernize” their strategies. A few days later, he again put pen to paper and signed additional criminal law legislation asserting that the changes “take us one step closer to righting the many injustices minority communities have faced because of a broken and unfair system."

All well and good but if the governor truly believes that “enough is enough” then he must use his signature to redress the crisis of mass incarceration and the 40,000 people in his state prisons: the living embodiment of the “injustice against minorities in America by the criminal justice system."

The racism that defines the criminal legal system does not stop with racist policing. It runs through arrest, prosecution, adjudication, and sentencing. It results in more than 9,000 people, disproportionately people of color, serving life sentences in New York State. And many come from the very zip codes the governor highlights daily in his visual aid of the “hot spots” for coronavirus in New York.

There are thousands of clemency applications on the governor’s desk from people seeking sentence commutations. The majority are from people of color. In 2019, Cuomo did not sign a single one.

Many meritorious clemency applications pre-date COVID-19. Now, for those most at-risk from the virus, the specter of serious medical complications or death adds even more weight to their applications. The governor has repeatedly stressed the danger facing vulnerable people living in congregate spaces. While he specifically refers to nursing homes, even he has made the irrefutable connection to prisons: “It’s the same with the nursing home, it’s a prison, it’s any congregate facility. There’s no doubt, where you have a congregation of people, that is a place where the virus can transfer...So, the congregate facilities of people, that’s all it is. It’s just wherever you have a density, a gathering of people that is a problematic area...”

Yet to date, amid all his signing ceremonies, he has signed zero clemency applications from the many older and ill people pleading for relief.
Incarcerated people and their families live in fear that COVID-19 will ravage the prisons where already more than 1,800 prison staff and people inside have contracted the virus and 21 have died. For many, there is newfound hope that the governor’s talk about the racism and injustice in the criminal legal system will lead him to finally exercise his vast clemency power.

Countless number of clemency applicants have worked hard to improve and transform and have achieved dramatic success under the trying and unforgiving circumstances of prison. Most have already served decades behind bars. In the governor’s own words, “Enough is enough.” Now all that is needed to set them free is his signature.

****
Steven Zeidman is a professor of law at CUNY School of Law. On Twitter @SteveZeidman.