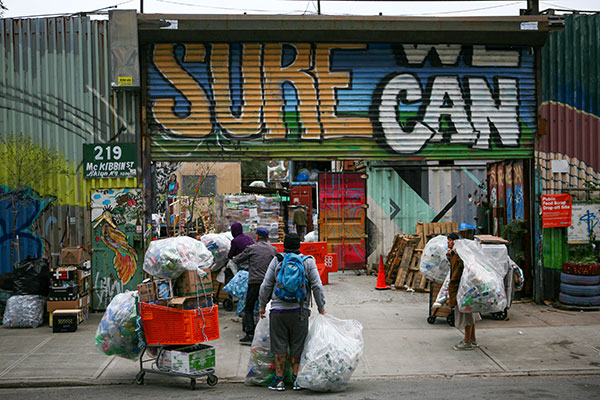 Canners redeeming their work (photo: Carlos Rivea for Sure We Can)

In New York City, there are an estimated 8,000 informal canners, or people who collect, sort, and redeem deposit-based containers for a living. Earning a nickel per can or bottle, canners straddle a liminal space in society: though often visible pushing carts with bulging bags through the city, they work in the shadows because of fear of harassment, shame, and a lack of public support.

Canners are indispensable to New York State’s environmental sustainability efforts and to the local economy. Each year, more than 5 billion containers are redeemed in New York, generating over $400 million for the economy and funding environmental campaigns.

Canners play an important role in achieving these results. For example, the 800-plus canners who frequent Sure We Can, the only not-for-profit redemption center in the five boroughs, redeemed 12 million deposit-based containers and returned over $700,000 to the local community last year alone. Further, Sure We Can supports eight green jobs and educates hundreds of K-12 and college students about urban environmental and social issues.

However, the COVID-19 pandemic has been disastrous for informal workers like canners. The current crisis exacerbates long-standing systemic economic, social, and environmental inequities and poses numerous public health risks to canners. Bottle redemption is considered an “essential service,” but economic support and social protections are not extended to canners. Many Asian-American canners have reported increased harassment and stigmatization. And in economic downturns, when unemployment swells, the number of people who turn to canning to survive increases.

Today, supporting canners is more important than ever. Here are several short- and long-term actions you can take to help canners and grow a green and just economy as we rebuild from the COVID-19 crisis:

Acknowledge and thank canners in your neighborhood for the services they provide. Canners are our neighbors: they often collect containers near their homes, cleaning up the neighborhood in the process.

Offer clean, unused, and sealed personal protective equipment (PPE), including gloves, face masks, and alcohol gel, to canners. Canners work independently and may not have access to PPE.

Advocate for economic relief measures for all informal workers, regardless of their tax-filing status. Support local organizations that are dispensing relief funds to those most impacted by the crisis.

Support the “Community Organics and Recycling Empowerment (CORE) Act” introduced by City Council Members Keith Powers and Antonio Reynoso. The CORE Act proposes the creation of community drop-off sites for the collection of organic waste and electronic waste, which currently contaminates the recycling stream and is hazardous to canners. Further, the CORE Act will create hundreds of green jobs.

Advocate for canners and informal workers to be included in decision-making processes across all levels of government. In cities around the world, the integration of canners into municipal solid waste management systems yields abundant social, economic, and environmental benefits.

Support legislation to increase the redemption value from 5-cents to 10-cents per container and to expand the type of containers eligible for redemption. Similar changes in Oregon have pushed recycling rates to over 90%. Further, updating the New York State “Bottle Bill,” which has remained largely unchanged since 1982, will provide canners a fair wage reflective of the value of their services.

As New York City enters phase 2 of “reopening,” canners should no longer be relegated to the shadows. We must recognize, advocate for, and advance the positive economic and environmental contributions of canners so as to realize the just and green New York City we all want.

Tags: environment • recycling • Sure We Can • bottle bill