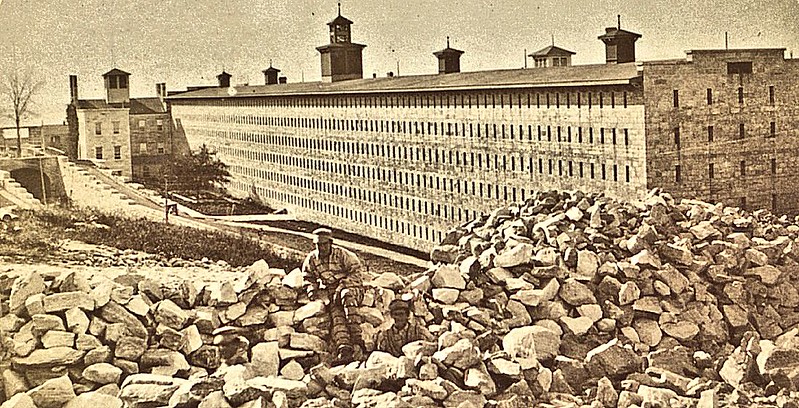 Monuments of all kinds are facing renewed scrutiny as protesters, fueled by the police killing of Rayshard Brooks, George Floyd, Breonna Taylor, and others, have taken to the streets in more than 140 cities. Statues that glorify and venerate slavery and slaveholders are coming down, with or without governmental approval, across the country. The sight of these prominently displayed symbols of brutality, inhumanity, and state-sponsored racism tumbling down inspires hope that there may also be a long-overdue reckoning for the United States’ centuries of devotion to white supremacy.

Now is clearly the moment for all to examine the monuments that clutter the landscape – not only those that honor the racist deeds of the powerful men enshrined in their statues, but those built of impenetrable walls that continue to enslave tens of thousands of people. And while few thought, up until a few months ago, that hundreds of statues could ever be questioned, protested, and pulled down, so, too, should prisons – repugnant monuments in stone – now be subject to the same critical scrutiny.

Just as those who tear down statues understand the historical contexts in which they were built and persist, so too do prison abolitionists share a perspective – they teach that prisons are borne of a larger system with roots in slavery, and envision a path forward to a society where such institutions no longer exist.  The abolitionists dare to imagine a time when – as with other monuments to atrocity – they come down, stone by stone, brick by brick.

‘Progressive’ New York is home to several of the country’s oldest and most brutal prisons.

Auburn prison was built in 1818. It is the site of the first execution by electric chair and the namesake of the "Auburn system," a practice that placed people in solitary confinement and required physical labor performed under complete silence. Any objections were met with a whipping.

Sing Sing prison was built in 1826 with cells measuring 7 feet deep by 3 feet-3 inches wide. The men inside were forced to mine the land and produced marble used in the construction of Grace Church in Manhattan, New York University, and the New York State Capitol and United States Treasury buildings. Six hundred and fourteen people have been executed in Sing Sing’s electric chair.

Clinton Dannemora was built in 1844. In 1887, 60-foot-high stone walls were added to the prison. Those walls still stand. It is sometimes called Little Siberia owing to the cold winters and the isolation of the upstate area where the prison sits. Originally, prisoners were used to supply labor to local mines. Nowadays, people inside New York prisons work a variety of tasks for an average of 65 cents an hour and their labor generates about $50 million in annual sales that goes mostly to local governments. Clinton is the largest maximum-security prison in New York, with a staff that includes about a thousand correction officers and supervisors.

New York, like many other states, built the majority of its prisons in rural regions far from the urban areas where so many of the incarcerated live. This reality exists up to the present: every prison in the state built since 1982 is in upstate New York. The proliferation of prisons in isolated, distressed rural areas that suffer from a lack of industry and jobs is due to their elected officials vigorously lobbying for prisons as economic saviors. The relationship between the decline of the upstate New York economy and the prison construction boom of the 1980s is unmistakable.

In many rural communities, the entire economy revolves around the local prison. Prisons offer jobs for relatively unskilled members of the community with no relevant training or experience. Rural towns in upstate New York employ hundreds of locals to oversee thousands of outsiders. Add to the mix the racial imbalance—predominantly, if not exclusively, white officers guarding predominantly Black and brown men—and the potential for abuse is as clear as the ugly images conjured up of plantations and slavery.

It is this upstate/city, white/black, guard/prisoner dynamic that leads to so many of the prison abuses that have been exposed over the years. Whether due to lack of familiarity, understanding, and trust, or racial animus, intolerance, indifference or neglect, the predictable results are systemic mistreatment. Discrimination in housing and job assignments and inadequate access to medical and mental health treatment are endemic. Fully revealed these days is the long-existing abuse of what are euphemistically called "special housing units" or "isolation cells"—in other words, rampant and prolonged solitary confinement for thousands of people.

While it may today seem impossible to literally bring down the prison walls, to attach a rope around the turrets and pull them down, much can be done. We can begin to dismantle from the inside out by freeing the innumerable people who remain incarcerated solely to satisfy the criminal legal system’s unquenchable thirst for punishment. Countless people of color in prison remain there solely because of racism and white supremacy, hastily dispatched by judges to serve life behind bars.

So much seems permanent in the American carceral system. The ancient upstate prisons stand with their imposing walls as unyielding fortresses. The people inside feel frozen in time, confined by a system that defines them solely and eternally by an act committed years before. It all feels impervious to change.

Yet few believed just a few months ago that scores of people would now be in the streets toppling visible symbols of oppression and reclaiming public space. Few thought there would ever be a serious conversation about defunding the police. Structural change in funding and priorities is on the immediate horizon. The current uprising calls for overarching reckoning and rectification. There is no reason its reach cannot be extended to prisons.

We can tear down a punitive system that values interminable punishment and holds no space for redemption. Newly constituted parole and clemency agencies must see people in prison for who they are and understand why they were incarcerated in the first place. Thousands of people can be immediately released as we begin to finally address the crisis of mass incarceration that has decimated families and communities of color. And eventually the walls of the prison just might come tumbling down.