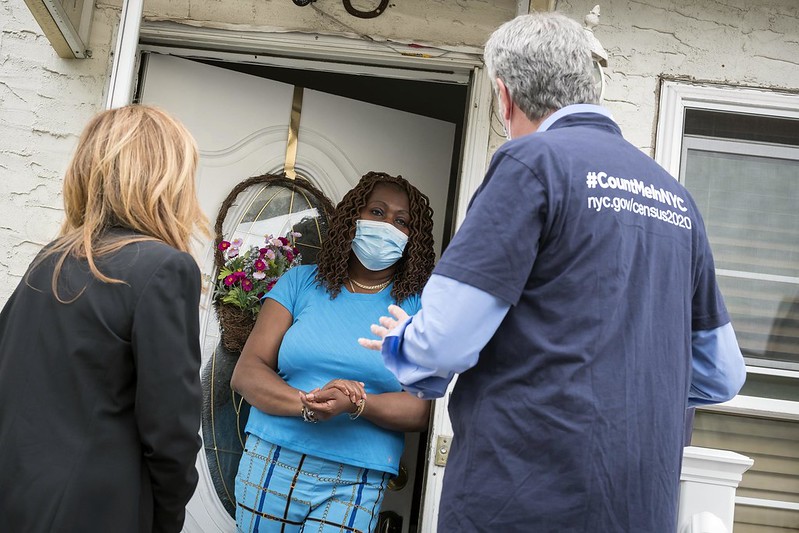 When our communities are undercounted in the Census—as seems sure to happen in light of the recent Supreme Court decision—it costs us seats in Congress and money for local schools, health services, food assistance, highway construction, and many other services. When our communities are not counted in land use decisions, it costs people their housing, their small businesses, their social networks, and their culture.

With so much on the line, the City of New York developed a $40 million program to ensure a full Census count in New York City. A major component was the $19 million “NYC Complete Count Fund,” which allocated money to more than 150 community organizations to reach people across races, ethnicities, and over 80 languages. For the Census, the city made extraordinary efforts to reach into all minority and immigrant communities, knowing their residents are at highest risk of not being counted.

By contrast, for land use decisions the city ignores race and ethnicity, and assumes all residents, business owners, and employees are equally likely to be displaced or to benefit from a rezoning or other major land use action.

We commend the de Blasio administration’s critically important efforts to reach historically undercounted populations for the Census. Every New Yorker, regardless of citizenship, neighborhood, or culture should participate without fear or worse, apathy. With the Census, City Hall values our diverse communities in federal dollars. With land use, City Hall does not seem to value the authentic small businesses, arts districts, and unique cultures in our diverse communities—the enduring cultural legacies that make New York the city it is.

The opportunity presented by the city’s Census work provides a template for land use planning, and it’s time to follow it.

The city can create a more equitable and inclusive land use process by incorporating data, specifically about race and ethnicity. The current city process routinely ignores race and ethnicity by minimizing assessment of risks disproportionately concentrated with residents of color and minority-owned businesses. Yet many predominantly-minority neighborhoods that have been targeted for city-backed rezoning—the Bay Street Corridor on Staten Island, Jerome Avenue and Southern Boulevard in the Bronx, East New York and Bushwick in Brooklyn, and East Harlem in Manhattan—are areas in the bottom 20% of Census self-response rate nationally, and where the city makes special efforts to count people for the Census.

Given its intentional outreach for the Census, the mayoral administration should make a similar effort when it comes to land use changes, especially since the Census has been prematurely cut off, imperiling New York’s federal funding stream and making local resource allocations all the more consequential. And major land use decisions have impacts that extend far beyond the next decade.

A bill that has been proposed in the City Council, mandating the use of a Racial Impact Study in major land use actions, offers a step forward. This bill would require the city to consider the likelihood of disproportionate impacts across racial and ethnic groups of proposed land use changes. By requiring the city to break out impacts by race and ethnicity, the city could identify negative impacts on specific groups before they occur and thus take steps to avoid such harm while fostering development that equitably distributes benefits of land use changes, growth, and public and private investment.

Racial impact studies are entirely feasible, as other cities like Seattle and Minneapolis have demonstrated. Any argument that this is too cumbersome to require in the Environmental Review process ignores disparate impacts unmitigated development can cause. These neighborhoods need investments in critical resources like schools, libraries, and transportation options in ways that do not create displacement pressure.

The changes seen in Williamsburg-Greenpoint and Park Slope-Fourth Avenue in Brooklyn have been calculated on the back end. Retrospective analysis has shown the folly of omitting a critical racial lens from decision-making. In these neighborhoods, despite overall population increases in the years after the rezoning, thousands of Black and Latino families have been forced out.

We applaud the city’s substantial Census effort to ensure that every New Yorker counts. But now that the door has been slammed in our face by Trump and the Supreme Court, we have to make sure another door opens. Help us pressure the City Council to pass the requirement of a Racial Impact Study.

When we are all taken into account, our communities win.