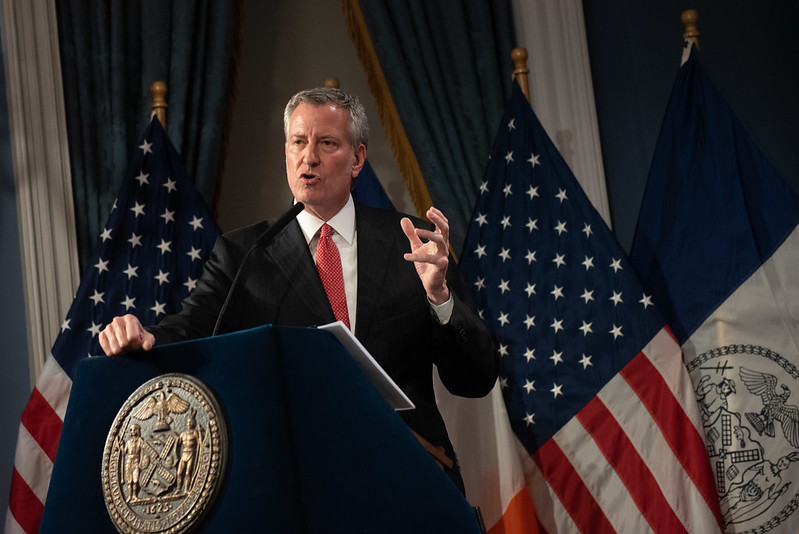 As required by the state Financial Control Act, last Monday Mayor de Blasio presented a modification of New York City’s current fiscal year budget and four-year financial plan. This “first quarter mod” is usually a no-drama, technical adjustment that makes few substantive changes to the budget adopted at the start of the fiscal year in July. It incorporates changes in revenue projections based on receipts actually received through September and any unanticipated adjustments in expenses (usually increases). But this has been anything but a usual year, and a more urgent tone and more aggressive budget changes were called for and not delivered.

Budget watchers hoped that the new budget documents would present a more realistic picture of the serious fiscal situation the city faces and the concrete steps the de Blasio administration will take to address it. Covid continues to wreak havoc on the city’s residents and its economy. Despite the expected arrival of a vaccine in the next few months, it is far from certain that things will bounce back and tax revenue will quickly return to pre-covid levels. Even during prior (”normal”) recessions, it has taken three years for the city’s economy to recover, and this recession is not normal.

Tourism, commercial real estate transactions, entertainment, and other activities may well take years to rebound and/or may undergo permanent changes and retrenchment. How will the city adjust its revenue and spending over the next four years to respond to these changes over an extended period of time? This budget modification doesn’t tell us.

We know that in addition to further income, business, and real estate tax revenue losses, the city could also face severe cuts in state aid because the state is in even worse financial shape, but that is not  reflected in the budget either. One billion dollars in state school aid to the city has already been removed from the state’s baseline budget for fiscal year 2022. In addition there is potentially $8 billion in unspecified statewide local aid cuts that could mean a loss of $2-3 billion to New York City. Instead, the city’s new budget mod relies on debt service savings (which are routine, not the result of new, affirmative steps by the city government), minimal efficiencies, and largely symbolic, non-recurring measures like short furloughs of management employees and postponements of payments to public employees (laughably characterized as “savings”) to balance this year’s budget and reduce the 2022 budget deficit by $400 million to $3.8 billion.

According to Mayor de Blasio, the strategy is to ‘hang on’ because sometime soon, there will be an infusion of federal stimulus funds which will close both the city and state gaps:

“….first of all, we need relief immediately to be able to continue to provide city services and to be able to keep people employed…We do not want to reduce services exactly when we're trying to come back and when people are in such dire need. So, this was a way of getting us to next year. But we've said all along, the only way we can actually make all of this come together is with the stimulus…And the federal government was supposed to protect us. Obviously, that didn't happen…So, for us to just keep hanging on is the right approach to get to the day where there's actually the federal support we deserve and which I absolutely believe is within reach.”

But federal aid to states and localities is far from certain. Hopes for imminent help were first focused on the post-election Congressional session, which will likely end by mid-December. There is discussion of a last-minute stimulus deal before Congress recesses in the next few weeks but Republican Senate recalcitrance makes adequate help for state and local governments unlikely, even though a number of ‘red’ states are in financial trouble as well as 'blue' ones.

The mayor’s preliminary budget for next fiscal year must be submitted to the City Council in January. Will President-Elect Biden be able to deliver any more state and local aid than is possible in the current Congress? Not necessarily. And if making that determination takes until February, or even later, is Mayor de Blasio going to ‘hang on’ even longer without taking any steps to solve our fiscal problems? Delaying the start of gap-closing measures will only make the problem and the necessary solutions more painful.

Federal funding to assist the city and other jurisdictions that faced economic shutdowns because of the pandemic is unquestionably necessary and appropriate, but whatever amount is authorized — if any — will unlikely be sufficient to cover the full New York City deficit and will not last for more than one or two years. As Citizens Budget Commission President Andrew Rein has said, federal stimulus will only be a bridge to a more sustainable future; the City and State will face continuing budget gaps if the economy doesn’t fully recover by 2023. So, what’s the plan?

The MTA and Port Authority, also struggling with dramatically-reduced revenue, have presented budget plans showing how they will survive without federal aid. The prospects of reduced transportation service are daunting indeed, but the public needs to understand them and be prepared if these difficult scenarios come to pass. Governor Cuomo has temporarily withheld substantial state aid payments to localities and cut back agency spending, warning that these cuts and more could become permanent. Mayor de Blasio prefers to avoid proactively making tough decisions that will make New Yorkers unhappy, but the uncertainty is already causing distress and there will be anger if New Yorkers feel they were misled to believe that federal aid would make everything better and they are confronted with service cuts, layoffs, tax increases, or a combination of all of these at the very last minute.

If the administration will not present a specific plan for multi-year gap closing then the Financial Control Board (FCB) should require that it do so. It is the FCB that requires the city to maintain a balanced budget, prepare a four-year financial plan, keep it updated, and demonstrate the fiscal discipline to maintain long-term fiscal stability. At the FCB meeting in August the Executive Director suggested that because of the unique circumstances wrought by covid it would be appropriate to hold another session in November to review the budget modification. But it is December and it doesn’t appear that such a meeting has yet been scheduled and the Executive Director of the FCB retired in mid-October; no replacement has been announced. It is critical that the FCB adopt a more assertive strategy to assure there is clarity about how state aid cuts will impact the city and hold the mayor accountable for a real fiscal management plan.

Moreover, if the mayor is going to ‘hang on,’ he will be leaving his successor to confront revenue shortfalls along with the larger issues of how to get the economy back on track. When he took office the mayor complained that his predecessor left him with a raft of unresolved labor contracts. What he seems to be ready to leave his successor is much worse. The media and voters should start asking mayoral candidates what their plans are for closing our budget gaps if federal funds do not make our fiscal challenges go away. The sooner we hear from them about this crucial issue, the better.