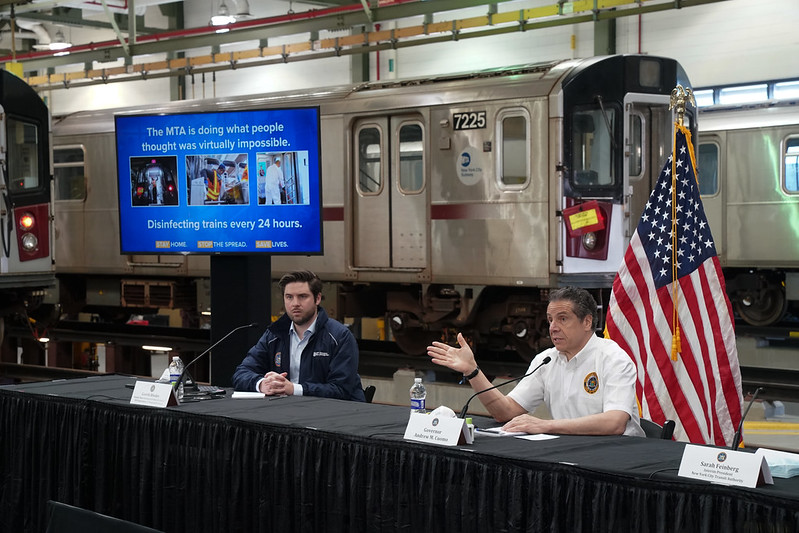 New York’s Metropolitan Transportation Authority (MTA) is facing the largest fiscal crisis in its history due to COVID-19. With more federal aid not forthcoming, the MTA has been buying time – quite literally, by borrowing up to $2.9 billion from the Federal Reserve – before the axe will need to fall on service and its workforce. The MTA’s Chief Financial Officer, Bob Foran, said that layoffs would need to start in May of 2021, and fare and toll increase hearings start this month. The MTA Board could vote on fare and toll increases as soon as February 2021.

Unfortunately, the public and many of New York’s elected leaders still have not fully grasped the magnitude of the MTA’s potential “worst case scenario” losses: $23 billion from 2020 to 2024 according to the latest budget numbers. This is partly because the MTA’s November Financial Plan does not clearly show the worst-case possibilities to the public and MTA Board, but rather emphasizes this period’s mid-point $16 billion deficit – still a debilitating sum.

A cumulative deficit of $23 billion is a massive amount: the equivalent of 15 months of pre-pandemic operating costs for the MTA. For comparison, the New York City Department of Education has a budget of $34 billion for the 2020-2021 school year to educate more than 1 million students.

When factoring in a worst-case scenario “adjustment,” the MTA’s deficit through 2024 balloons to nearly $23 billion, up from $16 billion, as shown in the chart below, an increase of $7 billion and 44% worse. 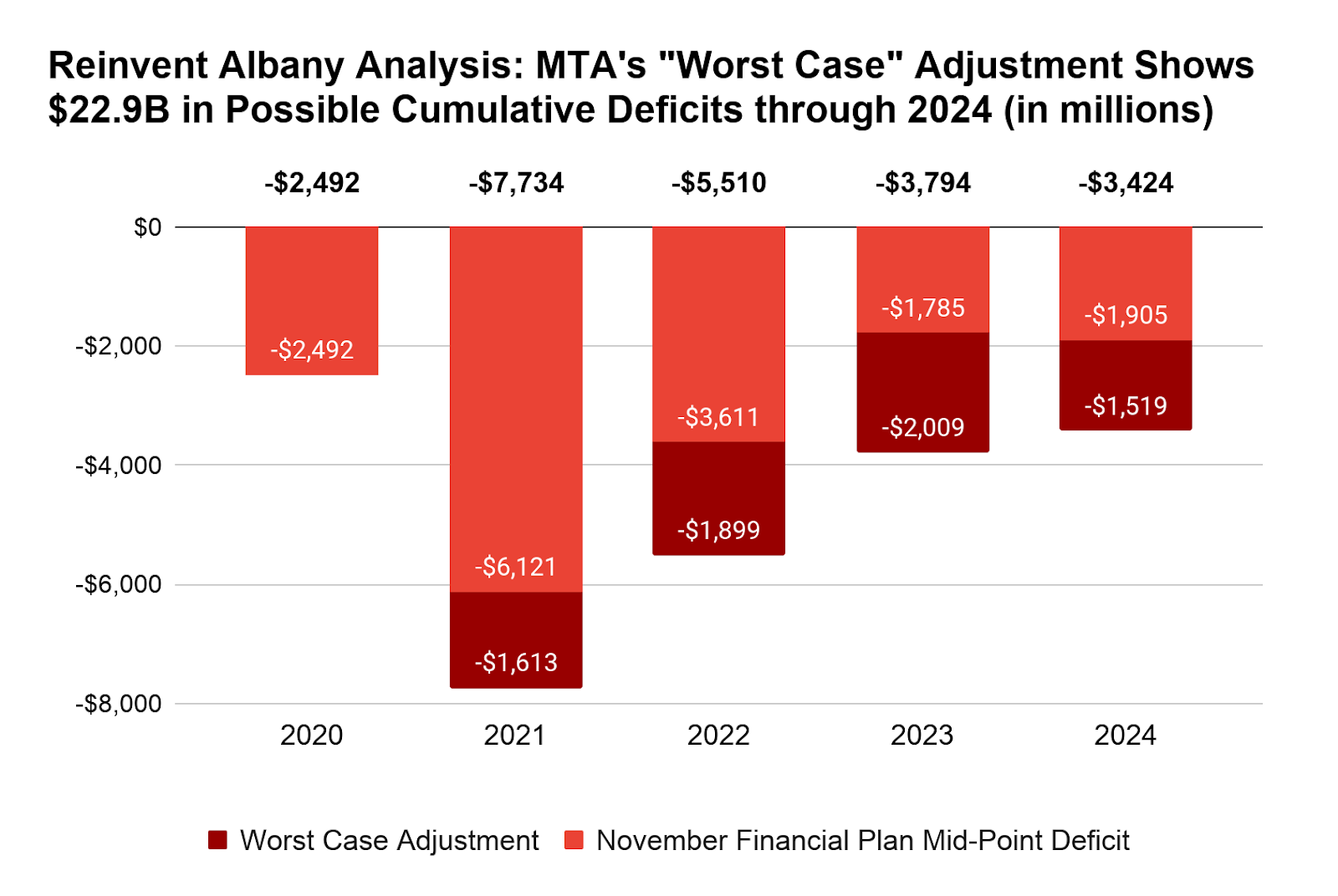 The MTA’s worst-case scenario “adjustment” assumes more depressed ridership than anticipated, and a significant “second wave” of COVID-19 accompanied by more lockdowns this winter, according to an updated analysis from McKinsey. In the worst case, McKinsey assumes an average “ridership recovery” of 27% for 2021, 54% for 2022, 71% for 2023, and 79% for 2024. 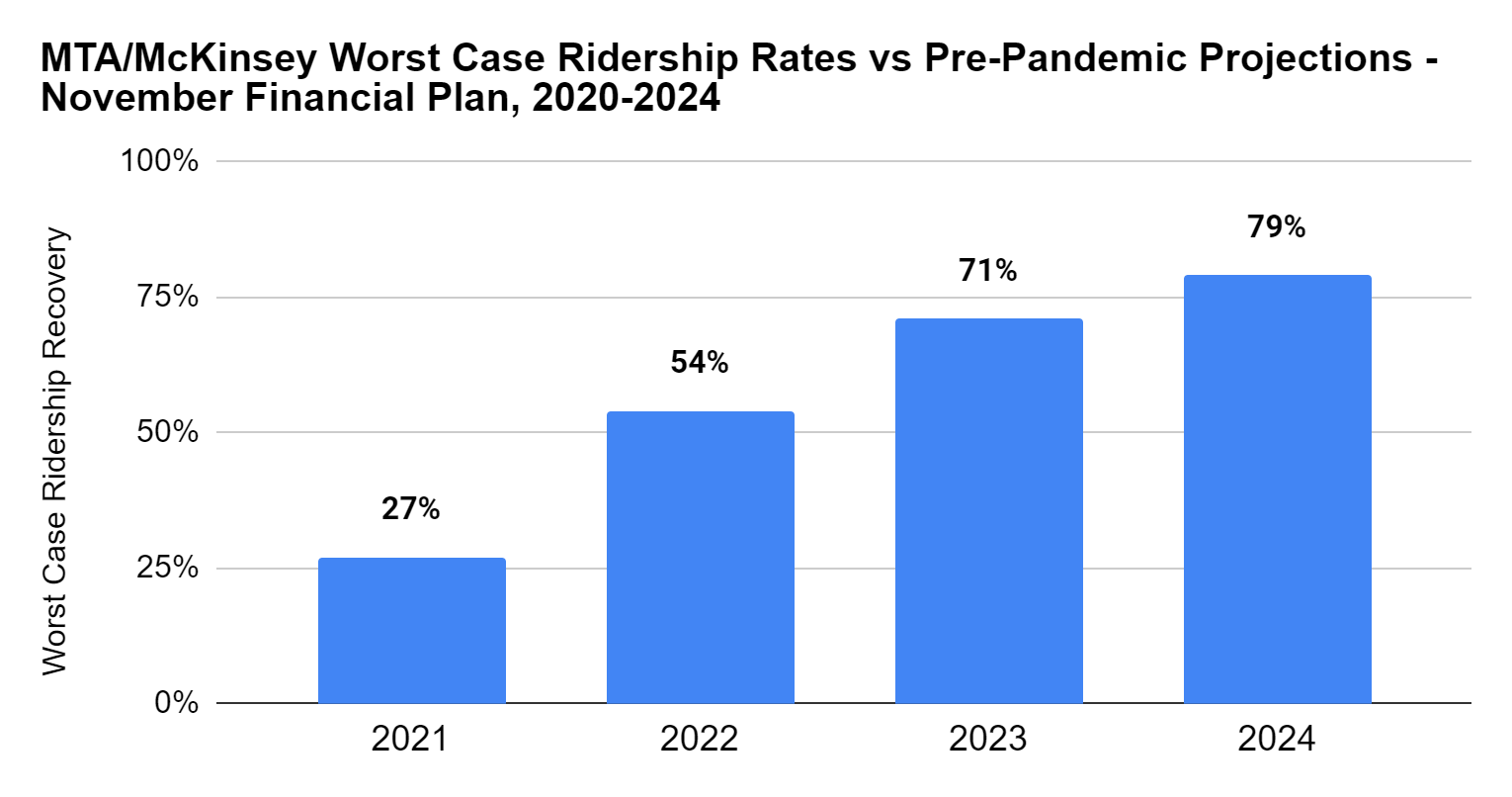 This means that the worst case would be only 27% of ridership coming back in 2021 compared to what the MTA had projected pre-pandemic. It is worth noting that these recovery rates are not pegged to 2019 ridership rates, which saw steady ridership gains that were expected to continue through 2024. The MTA/McKinsey assumption shows relatively larger revenue deficits than if 2019 were held as a “base” year for ridership, and therefore for fare revenue, based on expected growth. However, steadily increasing MTA ridership is certainly a positive goal for the agency and the New York City region as a whole, albeit one that may be harder to attain post-covid.

MTA’s November Doomsday Plan Doesn’t Close Either a $16B or $23B Deficit
The MTA’s August Doomsday plan showed a number of options to close the gaps, as seen in our prior analysis, which also showed a $1 billion gap even with brutal cuts. The MTA’s November plan repeats many of these bad options to close the gaps in the absence of federal aid and greater support from New York State. Together, these gap-closers make up $14 billion of the MTA’s $16-$23 billion deficit, and include borrowing that will need to be paid back.

This means that at least $2 billion more in cuts will be needed, and as much as $9 billion in a worst-case scenario. Our summary of the MTA’s latest budget gap-closing options is below. It includes the MTA using its Other Post-Employment Benefits (OPEB) trust, which was intended to help pay future MTA retirement benefits, and borrowing $2.9 billion from the Federal Reserve’s Municipal Liquidity Facility (MLF) program, which will require the MTA to start paying interest in 2023. 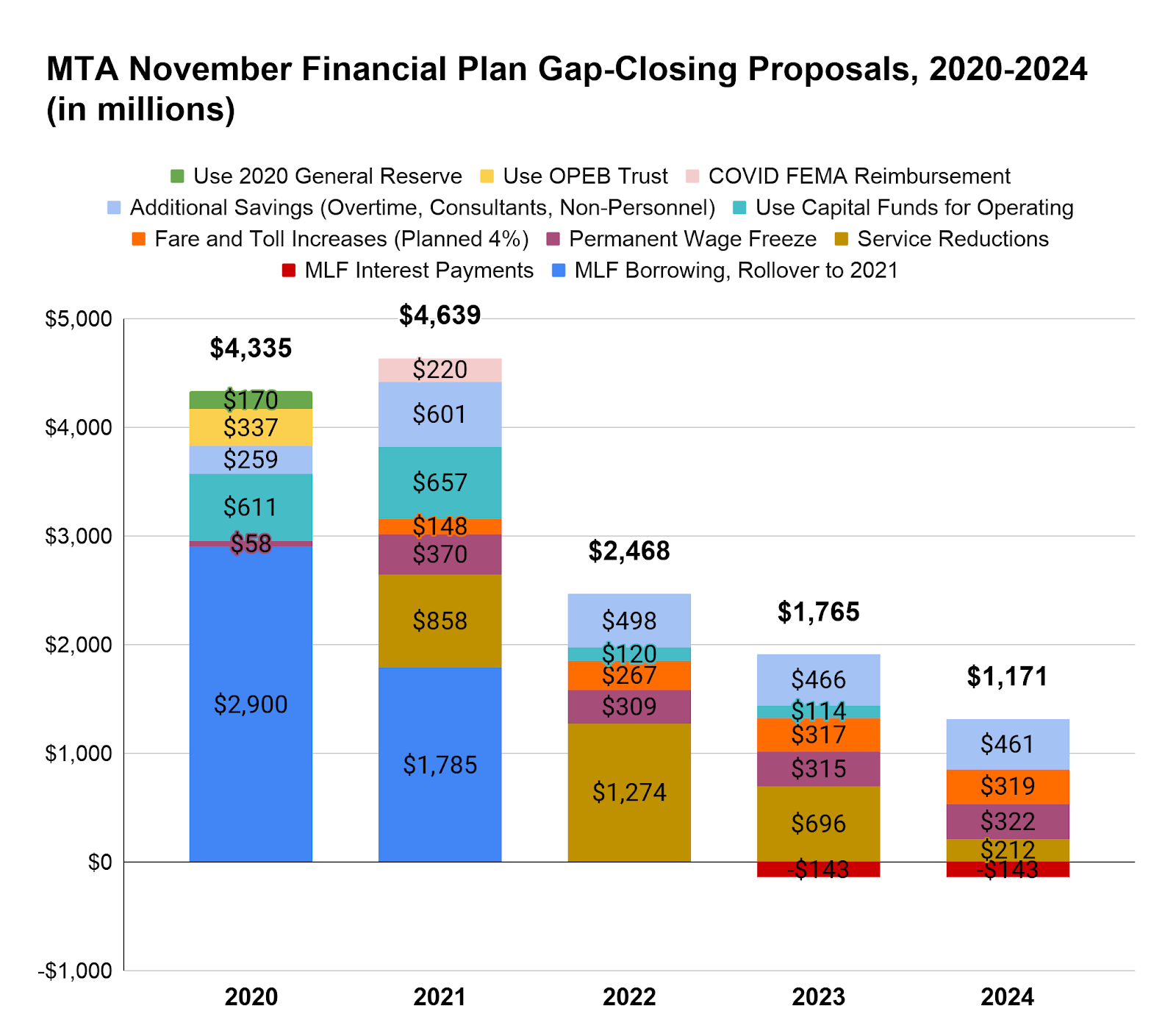 Fare Hikes
In August, the MTA hinted at possible fare hikes beyond the regular increases planned every other year, for an additional 1% above the planned 4% increase. While the MTA’s November Financial Plan shows only 4% increases as originally planned pre-covid (as included in the chart above), some MTA Board members loyal to the governor have indicated that there should be no increases, or new discounts to lure riders back. No one will dispute that fare policies should consider the impact on ridership, as who wants to pay more for much, much less? Higher fares could deter riders from coming back, and 2019’s ridership gains already seem a distant memory.

The problem here is that the only solutions being proposed by Governor Cuomo and his MTA are cuts, borrowing, discounts on fares, or holding the fare steady. At best, discounts and holding the fare at current levels will have a neutral impact on the MTA’s bottom line, if not further increasing the deficit. The proposed fare hikes were expected to net $148 million more in revenue for 2021, and $267 million more in 2022.

MTA is Planning on the State Raiding Its Dedicated Funds
Even worse, the governor is actively withholding from the MTA its dedicated funds as part of the state’s budget adjustment process, with 20% across-the-board cuts being inflicted on everything from the MTA to nonprofit service-providers, CUNY, and other vital institutions. Funds have been withheld for months now, and are becoming de facto cuts in the absence of formal cuts. The withheld funds have allowed the state to accumulate a cash hoard of $23.8 billion – 62% more than this time last year, according to the latest cash reports from the State Comptroller. This is nearly the same amount as the MTA’s worst-case deficit through 2024: $22.9 billion.

The MTA has acknowledged that $600 million in state subsidies are at risk if the federal government doesn’t provide emergency aid to New York State, even factoring this loss into its $12 billion ask for federal aid. Translated from Albany budget lingo into real-world terms, the state plans to raid $600 million in MTA dedicated taxes to prop up its own finances.

Congress and Governor Cuomo Both Have a Role to Play
So where are the solutions? Everyone agrees that the federal government is the MTA’s best option. Congress provided the MTA with nearly $4 billion in CARES Act funds earlier this year, which was fully spent down this summer. And the Federal Reserve’s Municipal Liquidity program is going to give the MTA $2.9 billion more in liquidity to help it make up some of these gaps. But any borrowing needs to be paid back, and the MTA will start paying $143 million a year in interest on this loan, according to its November Financial Plan.

The MTA’s “worst case” $22.9 billion deficit also happens to be nearly the same size as the ‘deficit’ New York has with the federal government. The MTA is essential to boosting the region’s economy, and State Comptroller Tom DiNapoli’s recent report shows that New York’s economic successes allowed it to send $23.7 billion more to Washington D.C. than it got back in federal aid in 2019. New York State ranked second worst only to New Jersey for what it got in return for its tax contributions. Forty-four other states got more back than they sent to the federal government; New Mexico, for example, got back nearly $12 billion more than it paid in taxes.

Now is the time for New York’s Congressional delegation to hold firm and ensure that the MTA is a necessary part of any emergency aid package. The latest aid proposal being discussed is yet again an anemic package that fails to fully support the MTA, which carries 40% of transit riders nationwide. The nation depends on New York to bolster federal tax revenue, and if the federal government lets the MTA fail, it only hurts itself.

At the same time, Governor Cuomo must once and for all pledge to stop raiding the MTA’s dedicated taxes to prop up the state’s budget shortfalls. The governor controls the MTA, and his own Board members have a fiduciary duty to the agency (including his Budget Director Rob Mujica), yet that is far from evident given that the State Division of the Budget is withholding millions from the MTA. It’s time they respect MTA dedicated funds – which were created by the Legislature to provide the MTA stable revenue in good times and bad – by giving them to the MTA at its time of greatest need.