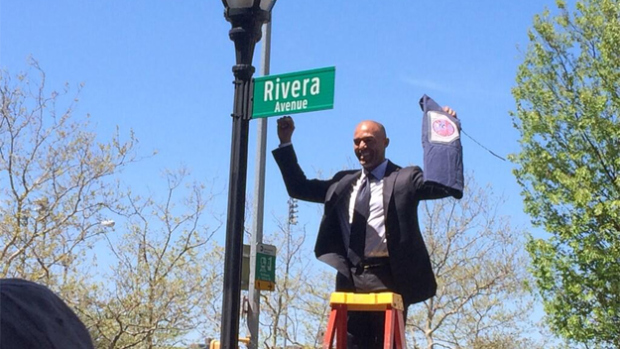 Stroll through any New York City neighborhood, and you’ll notice that many streets carry two names: the name on the map, and the name of a person. Unless you happen to be on a street named after a major cultural or historic figure that you're familiar with, such as (George) Gershwin Way (West 50th Street and Broadway in Manhattan) or (Mariano) Rivera Avenue (161st Street and River Avenue in the Bronx) perhaps, you may wonder who the person was and what they did to merit the honor.

Our analysis of more than 1,500 honorific street names recently compiled by retired city planner Gilbert Tauber offers a glimpse into naming trends over the past 15 years. The city has recognized a broad spectrum of New Yorkers — some famous, but many unknown beyond the bounds of their neighborhoods. Boulevards and ways, places and corners across the city offer testament to the city’s firefighters, teachers, community volunteers and business owners. Compared to the city’s historic street names, which tend to honor white men, these new street names reflect a much broader range of ethnicity and social class.

Some takeaways from the study:

We honor the fallen

The largest group of people honored between 1998 and 2013, making up about 30 percent of all co-named streets in this period, are New Yorkers who died in the attacks on the World Trade Center on September 11, 2001. Street co-naming spiked in the years after, when the city named 438 streets after civilian victims and first responders.

As Tauber told us, many modern street names “are bestowed really in sympathy” for the families of New Yorkers who died tragically. These are not just 9-11 victims, but also police officers killed in the line of duty, and children who were struck by cars or caught in crossfire.

Our analysis found that 85 honorific streets (six percent) since 1998 commemorate civilians who died as the result of violence, illness or accident, sometimes at a young age. Around seven percent were named after men (but no women) who served in the military, many in World War II, but also in the conflicts in Iraq and Afghanistan. Another eight percent honor New York City police officers and firefighters, though not all of these died in the line of duty. (Many honorees fall into multiple categories, so categories add up to more than 100 percent.)

'Do-gooders' get their day too

The other major group of honorific streets bear the names of average men and women who made above-average contributions to their communities. The 419 streets (27 percent) named for people “active in community” include individuals who volunteered with charities, fought for better schools, coached little league or generally did good in their neighborhoods. Many also served their communities as religious leaders, community board members, or business owners.

We also took a closer look at some of the colorful characters who have merited a street name, and found that their individual stories illuminate the city’s richly textured history and culture. Why did the city name four streets after barbers, a Chinese crusader against the ancient opium trade, or a game of Scrabble?

Each borough has its heroes

If Brooklyn loves its barbers, who gets remembered in the Bronx? Each borough shows its own trends in the people honored.

Staten Island designated the most honorific street names, 414 since 1998. Home to many city workers, Staten Island also had the largest proportions of honorific streets named after civilians who died September 11, 2001, and first responders on the scene of the attacks that day.

Bronx communities designated the fewest honorific streets, only 184 in the past 15 years. Compared to the other boroughs, the Bronx named a larger percentage of its honorific streets after community activists, police officers and firefighters. Meanwhile, Manhattan lived up to its reputation as a center of arts and culture, naming 13 percent of its honorific streets after people in the arts — painters, writers, composers and photographers — far more than any other borough. Queens celebrated its status as the most ethnically diverse borough, naming streets in recognition of its Ecuadorian, Colombian and Maltese communities, among other historic and cultural sites.

Origins of the data

We started with the information on Gilbert Tauber’s honorific street names website. Tauber created the site by meticulously looking up city council documents for the hundreds of local laws that officially designated these street names. To create the data set, we developed categories that reflected the main reasons people or institutions were honored with a street name, then our team of reporters read through each entry and assigned it to one or more categories. The assignments are subjective, and may have varied depending on the interpretation of the reporter inputting the data. Many streets belong in more than one category, so the percentages of streets in each category add up to more than 100 percent. See the table below or explore the full data set.