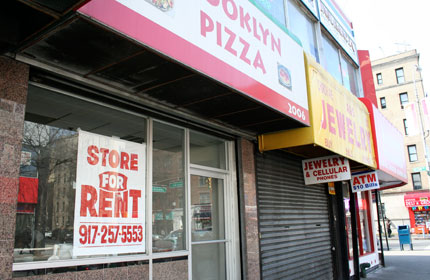 Flash-forward a decade and what do you think New York City will look like?

Will we still be the financial capital? Will tourism, retail and Wall Street be booming or wallowing in the residue of the 2008 recession? Will the city still be home to more than 8.3 million people or will New Yorkers have fled for cheaper, more vibrant settings?

The policy decisions the city makes now will determine the future we see then. We asked small businesses, officials, an economist, advocate and union representative to weigh in on what they think the city should do to revitalize our economy -- ranging from taxing the wealthy to investing in infrastructure and doling out breaks for city businesses.

Struggling Small Businesses Look for Help
by Courtney Gross and Ya-Hsuan Huang
Gotham Gazette visited parts of Brooklyn and Queens to see how small business owners were faring in this plummeting economy. Watch our audio slideshow to find out.

Using Tax Incentives Wisely in the Recession
by Bettina Damiani
Good Jobs New York's project director says the city must retool its tax incentive programs so they actually create jobs -- and good ones at that.

Cutting Back -- Except for Transit
by Nicole Gelinas
Contributing editor to City Journal, Nicole Gelinas argues the city must cut spending while investing in vital transportation infrastructure. And, she says, politicians have to stop relying on raising taxes on the rich.

Working to Recover
by Seth Pinsky
The president of the New York City Economic Development Corp., Seth Pinsky, details steps the Bloomberg administration is taking to help the economy recover, including lowering taxes for small businesses and investing in capital projects, like Willets Point.

Keeping the Middle Class
by Christine Quinn
The City Council speaker hopes the city can streamline application processes for businesses, raise taxes for the wealthy while cutting them for low-income residents and bring the biotech industry to the five boroughs.

Tax Justice in a New Economy
by Lillian Roberts
The executive director of the city's largest municipal employee union, DC 37, says no-bid contracts must go if the economy is to recover. She wants a tax on the wealthy too.

Finance for the Future
by Kathryn Wylde
While the financial sector will never be the same, the Partnership for New York City's president and chief executive officer says the city must remain the financial capital and continue to lure in corporate headquarters and foreign investment.